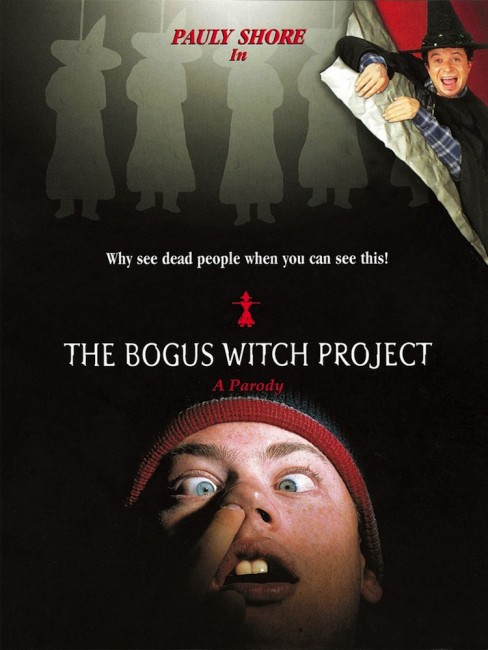 The Bogus Witch Project uses the central framework of these pieces airing on a tv show called The Woods. This makes The Bogus Witch Project seem like a horror movie version of Amazon Women on the Moon (1987). Each short comes interspersed with some not very funny ads – a lawyer who represents werewolves for worker compensations and alien impregnation victims, infomercials for Blair Witch stick figures, an unfunny series of America’s Goriest Home Videos, a series of horror storyteller promos featuring Jason and the like, and one slightly amusing mock trailer for a film called Stalking on Elm Street that features a Stephen Hawking lookalike as the slasher.

The problem with the six Blair Witch spoofs is that the parody quickly becomes repetitive. Several of the pieces repeat the same gag – the video camera being stolen, someone forgetting to take the lens cap off, the climactic scene of the guy standing against the wall being someone taking a piss. The Blair Underwood Project sounds a cute idea on paper but the piece is belaboured and strained in trying to be funny. Ditto The Willie Witch Projects, which tries to draw some potentially amusing humour from a Boyz ‘N the Hood (1991) take on Blair Witch but ends up with some excruciatingly shrill scenes with a drag queen flouncing about in the wilderness. The Griffith Park Witch Project – a piece about a deluded Heather Donahue-type desperately trying to find evidence even when such doesn’t exist – is not particularly funny and suffers from an almost callous nastiness toward the central character.

Although the most excruciating piece is the title segment – the only professional seeming piece in the group with the only recognisable name, Pauly Shore. Pauly Shore is possibly the most irritating and annoying screen presence in the world. The segment – a few brief scenes with Shore camping in a cinema – has no real rhyme, rationale or even coherence to it and its sole virtue is that it is the shortest of the segments.

There are a couple of segments that are occasionally amusing. The Bel-Air Witch Project – a slight piece with the filmmaking trio searching the ritzy L.A. neighbourhood of Bel-Air – has one of two amusing moments – Jenna Leigh Green parodies Heather Donahue’s tearful last confession: “I am truly sorry to the Screen Actors Guild for joining a non-union project,” while the mysterious objects found outside the tent turns out to be doggie poop: “Oh my God, that wasn’t here last night.”

The most amusing segment is The Watts Bitch Project with a group lost in the L.A. ghetto suburb of Watts – where the 16mm camera turns out to be a 16mm projector and the girl gets propositioned by a pimp. Some of the lines here are amusing:– “They called the LAPD but by the time they got there three months later the bodies had mysteriously disappeared” and [in reference to being lost] “If we keep going we’re going to hit White People soon. At least Koreans.” If this piece had been extended for the whole film, The Bogus Witch Project might have been quite funny.