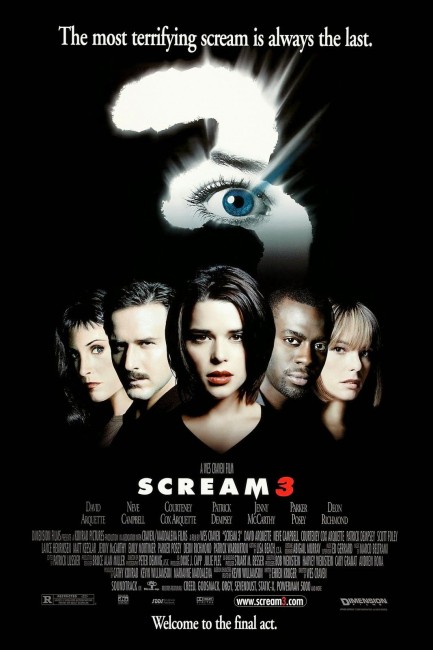 With the commencement of Sunrise Studios’ production of ‘Stab 3’, another sequel to the film based on the Hillsboro Massacre, a new killer starts slaughtering the cast and crew of the production. As various other players in the previous killings are reunited, Sidney Prescott reluctantly comes out of reclusion to help the police. As she comes to be involved, Sidney realizes that the new killer is in some way connected to secrets from her mother’s past.

Scream (1996) was one of the runaway horror successes of the mid-1990s. It was a parody of the slasher genre that played with its audience’s recognition of the conventions and cliches in sharply self-aware ways. Its unexpected success became the model for a host of horror movie deconstructions, including the likes of I Know What You Did Last Summer (1997), The Faculty (1998) and the pseudo-documentary game playing of The Blair Witch Project (1999), as well as copycat films like Urban Legend (1998), I Still Know What You Did Last Summer (1998), Disturbing Behavior (1998), Idle Hands (1999) and Valentine (2001). Director Wes Craven, screenwriter Kevin Williamson and most of the cast returned for Scream 2 (1997), which cleverly parodied slasher sequels, although lacked the originality of the first film.

Wes Craven and most of the regulars (with the exception of Kevin Williamson who was too busy) returned here for Scream 3. It seems unsporting to slam a film that has so effectively critic-proofed itself by announcing itself in quote marks to be a sequel that is a parody of a sequel. But, well, the creativity of the series does seem to be flagging. Certainly, there are many creative touches in the script by Ehren Kruger, who previously wrote the intelligent Arlington Road (1999) and would go onto write The Ring (2002). Part of the fun of the film comes in watching what has happened to the familiar characters – Cotton Weary has become a Jerry Springer-styled tv talkshow host, while Sidney has gone into seclusion and become a women’s crisis line phone counsellor.

On the other hand, Scream 3 does have to stretch itself to get all the characters in – ie. the police ask the help of a tabloid tv journalist to do detective work for them; the character of the straight-shooting country boy cop Dewey improbably turns up as a consultant to a sleazy sequel attempting to milk the events of the killings; and having killed film buff sage Jamie Kennedy off in the previously sequel, the film implausibly turns up a videotape he recorded for postmortem posterity in the case of a further sequel so as to outline the rules of trilogies. The plot equally strains credibility in trying to squeeze in a backstory for its new killer’s motivation. When the new killer’s identity is revealed it is a flat divulgement, lacking in the meta-fictional zing that the revelations of the killer’s identities did in the previous two films. (The fact that Wes Craven purportedly filmed three different endings to Scream 3 and did not tell the cast which one of them he was intending to use reinforces the cursory nature that the new killer’s identity is spun out with).

Scream 3‘s novel spin on the series’ running meta-fictional gags is to set the film inside a studio during the making of a sequel to the film based on the events of the original. The idea is clever but the script seems to miss much of the potential of the idea and does little with it other than having the cast being chased around a studio and a B-movie producer’s house and throwing in a handful of snide Hollywood jibes. The studio setting affords occasional reality and illusion plays with scenes of a victim trying to stab the killer only to find they are holding a prop knife and the like, but there is surprisingly little in the way of play between film, genre in-reference and reality that Wes Craven and Kevin Williamson so excelled at in the previous two films, and none at all of the gags about the killer asking victims what their favourite scary movie was. Scream 3‘s cleverest idea is in having a meeting between Courteney Cox Arquette’s Gail Weathers and the actress playing her in the film, who is constantly remonstrating Cox for being a bitch, and having both team up to get to the bottom of the mystery and proving equally as cutthroat as the other. In another unfulfilled plot device, the killer sends people faxes with copies of the script he is writing about the ongoing killings, but this gets quickly forgotten; elsewhere people work out that the killer is killing people in order of their deaths in the film script but this is forgotten as people who have nothing to do with the film start being killed too.

There are a couple of witty cameos. Kevin Smith and Jason Mewes turn up in a studio tour as Silent Bob and Jay, the two slackers from all of Smith’s films. [Kevin Smith repaid the favour and included a cameo from Wes Craven doing a parody of the Scream films in Jay and Silent Bob Strike Back (2001)]. Carrie Fisher makes an hilarious cameo as a studio clerk who notes: “I know what you’re thinking – I look the same. But I wasn’t the one that slept with George Lucas and got the part.” (Roger Corman also makes an appearance as a moral majority type who wants the production shut down, citing film and real-life violence connections).

The Carrie Fisher gag gets a good laugh but, funny and all as it is, it lacks in comparison to the first two Scream films. The gags here are cameo and in-joke gags that have little sophistication above the average Joe Dante film, whereas in the first two films Kevin Williamson relentlessly played with and jibed at the cliches and had characters take their entire ways of acting from movie stereotypes.

The film’s greatest piece of inspiration in this regard was its now defunct website (www.scream3.com), which instead of featuring the character/cast bios and a plot synopsis of the film as most promotional websites do, creates an entire fictional history of Sunrise Studios, a production list of upcoming films and bios of the cast in Stab 3. Craven racks suspense competently but the film seems hurried as he hurtles through set-ups with such a breakneck pace that sequences never have time to linger in memory.

Wes Craven and most of the cast returned for a further entry in the series with Scre4m/Scream 4 (2011). The premise was later reworked as the tv series Scream: The Series (2015-9).