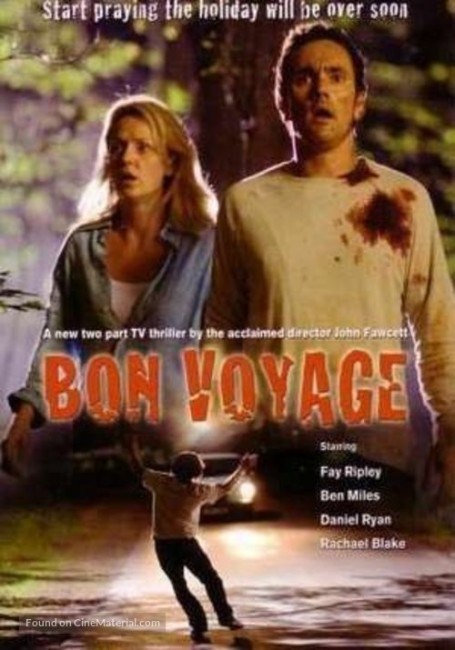 Husband and wife Neil and Elizabeth Aldred, along with their sixteen-year-old daughter Rachel and younger son David, cross the English Channel and drive through rural France on a holiday. At one campsite, they meet fellow English couple Simon and Linda Holder. They find the Holders’ over-friendliness a turnoff and decide to leave the following morning. However, Neil believes the Holders are following them and may have deliberately punctured their tire. They are stopped by police and questioned about the disappearance of Toby, a young boy who played with David at the campsite and has gone missing. While driving through the countryside at night, someone runs out in front of their car and they hit and kill him. This turns out to be Toby. Entering the nearby woods to search for help, Neil and Elizabeth find the Holders’ camper van there. They return to the car to find that Rachel and David have been abducted by the Holders. Hunted by the police who believe they killed Toby and hampered by not being able to speak French, they try to follow the scanty clues they have to the whereabouts of the Holders. Meanwhile, the Holders imprison Rachel and David in their home. Their two children drowned in an accident and they have been abducting others to fulfil their idea of a family. Rachel then becomes afraid of the increasing sexual interest that Simon shows towards her.

Bon Voyage is a psycho-thriller made for British tv and shown in two two-hour slots. The British television psycho-thriller is a considerably underrated genre and has produced a number of excellent movies and mini-series in recent years, including the likes of Cracker (1993-6), Wire in the Blood (2002-8), Cold Blood (2005-6) and Like Father Like Son (2005). Bon Voyage was directed by John Fawcett, the Canadian director who made the sharp and witty werewolf film Ginger Snaps (2000). More recently, Fawcett was the creator of the hit cloning tv series Orphan Black (2013-7).

There are a number of similarities between Bon Voyage and the psycho-thriller And Soon the Darkness (1970), which concerned two English girls on a cycling tour of the French countryside being stalked by a killer. In both works, the French countryside is at the fore, yet becomes something sinister and brooding as the protagonists’ idyllic holiday goes wrong and members of their party go missing. The central theme in both is of English tourists alone in a pretty countryside, isolated by not knowing the language. Bon Voyage makes considerable virtue of its locations. The journey through the French countryside in the first part comes with a rustic beauty as we accompany the family on their drive through quaint villages and past regal old churches. The locations have been chosen for maximum pictographic value and, if nothing else, Bon Voyage serves as a fabulous travelogue of the French countryside.

The threat presented by Daniel Ryan and Fay Ripley initially hovers with an ambiguity and does not fully emerge until the end of the first part. You wonder for a time if much of it is not simply in Ben Miles and Rachael Blake’s minds – the supposedly sinister couple seem terribly normal and we wonder if Ben’s impulsive decision to leave the morning after meeting them is not just snobbery, while other scenes like the crazed road race seem more like him hot-headedly acting to threats he only imagines. We also see tensions bubbling beneath the family – Neil’s obsession with his work and the constant interruption of their holiday by work calls on his cellphone, the suggestion that Elizabeth might have had an affair and Rachel’s desire for freedom from parental control. The plot snakes around with considerable dexterity. There comes a jolt at the end of the first part when the family run the missing kid down and then, in an attempt to get help, their own children are abducted and they find themselves blamed for Toby’s murder by authorities.

In the second half, the image of the couple, particularly Fay Ripley with her chirpy provincial accent, pretending that everything is normal and determined to force the children to enact their concept of a family unit proves disquieting. Director John Fawcett constantly emphasizes the ordinariness of things – the cat nonchalantly walking by as Fay Ripley and Daniel Ryan come downstairs from the room where the children are imprisoned, or the sheer banality of them all playing a game of cards. This sits aside a sense of danger that explodes with a moment’s notice – like where the children both defy orders to feed toast to the cat, only for Daniel Ryan to get up and abruptly snap the cat’s neck. There is also a constant lurking undertow of sexual predatoriness between Daniel Ryan and 16-year-old Emily Beecham.

All the performances in the film are good to a person. Surprisingly, the best known among the group, Fay Ripley, gets the least screen time out of the adult principals and is unceremoniously outfitted in an obvious wig.