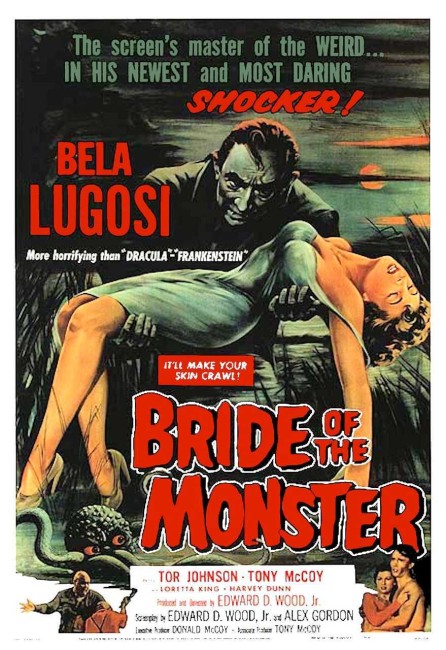 aka Bride of the Atom

Police, along with trouble-making journalist Janet Lawton and a world famous monster specialist all converge to search the swamps around Lake Marsh after dead bodies start to be found, reputedly killed by a monster. In the swamps, Janet is captured by Dr Eric Vornoff, an exiled scientist who is attempting to perfect a series of experiments that will create a race of atomic supermen.

Bride of the Monster is one of the essential items in the cult surrounding Edward D. Wood Jr, the notorious ‘world’s worst director’, famed for his cross-dressing, his surrounding entourage of oddballs and of course directing the cult bad film Plan 9 from Outer Space (1959).

Bride of the Monster is probably the closest to a good film (as opposed to an enjoyably bad film) that Edward D. Wood Jr ever made. The traditional view of Bride of the Monster is that it is another unintentional Wood laugh-fest and it is labelled as such simply because of the Wood name. Contrarily though, viewing Bride of the Monster might instead suggest that much of this was intended upon Edward D. Wood Jr’s part. Not to deny that several amusing Wood-ian low-budget gaffes do exist but the film does appear to have been made to a formulaic competence that makes it no different from the numerous low-budget mad scientist films that Bela Lugosi was appearing in at Monogram and PRC during the previous decade. Certainly, Bride of the Monster never comes with any of the hilarious pretensions that make either Glen or Glenda? (1952) or Plan 9 from Outer Space, the two other essential entries in the Edward D. Wood Jr cult, so unintentionally funny.

Edward D. Wood Jr was a horror movie fan and Bride of the Monster gives the impression of being intended as a grand jape upon the mad scientist formula. Within the domain of what he sets out to do here, Wood succeeds reasonably well. He throws in the most entertaining stew of elements possible. Bela Lugosi is on grand form as a mad scientist living in the swamps, replete with a hulking mindless lab assistant whom he keeps in shape by beating with a whip; a lab with secret doors through a fireplace in the living room; and an octopus for throwing interlopers to. When the heroine is brought out to be experimented on, she is dressed in a bridal gown. Everything goes up in an atomic bomb blast at the end, which was randomly inserted as an end to things simply because the film’s financier wanted to include a message warning against atomic war.

Of course, there are many moments of typical Edward D. Wood Jr unintentional hilarity – the photo enlarger that stands in for a radiation machine; the totally mismatched cuts between Bela Lugosi looking out a glass window to stock footage of an octopus and the hilarious scenes of people wrestling with inanimate octopus arms in a shallow pool – which only add to the fun of the exercise. (There is the famous behind-the-scenes story of how Wood and associates stole the mechanical octopus from the Republic Studios prop warehouse but failed to take the motor that made it go, leaving the octopus inanimate and the actors having to pretend to wrestle with it).

Edward D. Wood Jr’s ace in the hole is Bela Lugosi who has probably the most fun he has ever had with one of his mad scientist roles. Lugosi has a grand speech: “My dear Professor Strowski, twenty years I was banned from my homeland, parted from my wife and son never to see them again. Why? Because I suggested to use the atomic elements for producing super-beings, beings of unimaginable strength and size. I was classed as a madman, a charlatan, outlawed in the world of science which had previously honoured me as a genius. Now, here in this forsaken jungle hell, I have proved that I am alright. No, Professor Strowski, it is no laughing matter … Home? I have no home. Hunted! Despised! Living like an animal. The jungle is my home. Then I will show the world I can be its master. I will perfect my own race of people, a race of atomic supermen which will conquer the world.” Lugosi seems to perform every syllable of the soliloquy with every muscle of his face. Apart from The Black Sleep (1956), this was Bela Lugosi’s last acting role (you cannot really count the few moments in Plan 9 in Outer Space). Such a magnificent B-movie soliloquy was surely the best possible way for someone like Bela Lugosi to go out on.