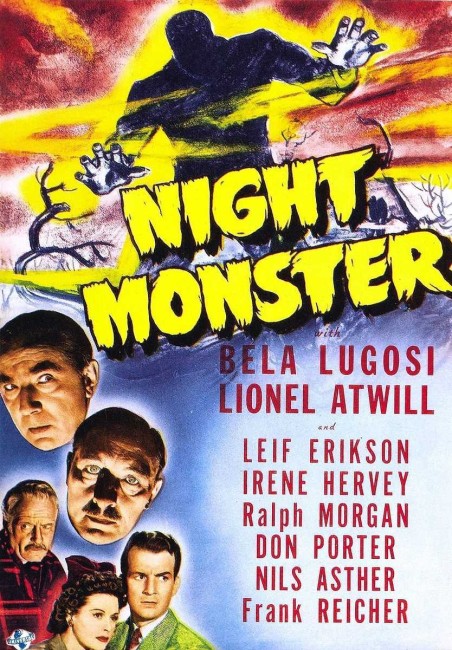 At Ingston Hall, Kurt Ingston’s sister Margaret accuses the housekeeper Miss Judd of keeping her falsely imprisoned with claims that she is mentally unwell. The maid Millie Carson announces she is going to leave and tell the police what she knows. Millie returns to get her things but is attacked by something in the woods. Psychologist Lynne Harper has been called to the estate by Margaret to independently assess her mental condition. Lynne’s car breaks down and she is given a ride by horror writer Dick Baldwin, a friend of Ingston. However, after they arrive, the servants seem to be trying to prevent Lynne from talking to Margaret. Also arriving are the three doctors that Ingston had accused of leaving his arms and legs paralysed and he wheelchair-ridden. That evening, Ingston has the swami Agor Singh demonstrate the ability to go into a trance and materialise an ancient buried skeleton dripping in blood. Somebody then starts killing the various doctors. Dick, Lynne and local police chief Cap Beggs investigate who among the gathered parties might be the killer.

Throughout the 1930s and 40s, Universal Studios had a great deal of success with their various Dracula, Frankenstein, Mummy, Wolf Man and Invisible Man films. These were followed by multiple sequels and then team-ups between the monsters. These films had made stars out of Bela Lugosi and Lionel Atwill, both of whom appeared in multiple roles throughout the Universal monster movies.

Night Monster quickly sets up a bunch of intriguing things. There’s the locale of a big old mansion. Your attention is held from the first scene where Margaret (Fay Helm) accuses housekeeper Doris Lloyd of cleaning blood up off the carpet, which she denies, before she starts going on about Margaret’s mental health and dismissing Margaret’s claims that they are keeping her imprisoned. Next maid Janet Shaw quits amid accusations that there is no good going on in the house, gets a ride into town to tell the police and then mysteriously disappears when she returns to get her things. There is the suggestion of someone or thing lurking in the mists of the woods of the estate, causing women left on their own to disappear.

The plot becomes interestingly convoluted. There’s the aging wheelchair-ridden patriarch (Ralph Morgan) who has brought the three doctors responsible for his disfiguring condition to the mansion; the psychologist (Irene Hervey) who believes that the servants of the house are trying to prevent her from seeing the sister (Fay Helm) and are possibly fabricating claims that she is mad; the threatening and gregariously smiling chauffeur Leif Erickson who seems to be involved in the skulduggery. And then the various doctors start being killed – with a trail of drops of blood that lead to hidden passages in the walls.

On a plot level, Night Monster could be a standard B programmer made by Republic, Monogram, PRC or one of the poverty row studios of the 1940s (where Bela Lugosi found regular employ throughout the decade in a steady stream of mad scientist roles). The production values are quite a bit better than usual. Most of the film is economically contained within the mansion and the surrounding grounds – the latter apparently being the same sets used for Universal’s The Wolf Man (1941), although I would argue that Night Monster makes much more atmospheric use of them. While the film does look stagebound, the lighting team do a great job of creating mood and atmosphere to all the skulking around.

That said, the film feels more like a regular murder mystery – of which there were dozens being made during this decade – that has been pushed over into the horror genre. The most fascinating scene is where Ralph Morgan introduces Indian swami Nils Asther who goes into a trance and causes a skeleton to manifest out of a buried tomb, dripping in blood and holding a sealed box, all amid talk of discussion about using the possibilities to create cellular regeneration. The end explanation of the killer definitely pushes Night Monster over into being a supernatural horror film where we find that [PLOT SPOILERS] wheelchair-ridden Ralph Morgan has been using the swami’s techniques to manifest a set of legs.

For all its sitting in the horror genre, the film surprisingly fails to do much with its top-billed and most famous genre faces – Bela Lugosi and Lionel Atwill. Lugosi has one of his most normal roles as just the butler – the surprise is that he plays the part with none of his trademark threatening or sinister overtones and is not involved in any of the sinister happenings. Indeed, any threat present comes far more from Doris Lloyd’s housekeeper and Leif Erickson’s chauffeur. Equally so, Atwill has a few scenes as a doctor and then is the first victim to be killed off.