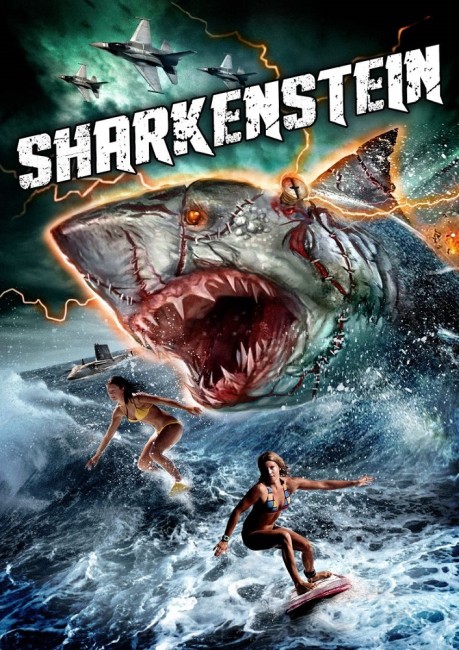 Three friends, Skip, Coop and Madge, rent a boat and driver to go out for a day in Katzman Cove. They are visited by the harbourmaster Duke Lawson who is closing the area because of the number of dead bodies that have been turning up. These are being caused by Klaus, a Nazi scientist who has a laboratory on an island just offshore. There he has managed to create a shark hybrid pieced together out of other shark parts and has inserted the Frankenstein monster’s brain into it and is planning to resurrect Adolf Hitler in a shark body.

Twin brothers Mark and John Polonia became filmmakers in the VHS heyday of the 1980s. Beginning with Hallucinations (1986), the Polonia Brothers, who were then only eighteen years old, went on to make a series of horror films that became legendary for their cheapness. Over the next two decades, they put out a heap of cheap VHS and dvd films. John died of a heart aneurism in 2008. Since then, Mark Polonia has continued on as a solo director. (Mark can be seen on screen here in a uncredited role as the mute man who pilots the boat the three characters charter). (See below for the other Polonia films).

As with most of the Polonia Brothers films, Sharkenstein is a painfully cheap film. This is surely evident in the glaring anachronism we see in the opening prologue that we are told is set in Nazi Germany where we see SS officers storming a laboratory while wearing modern sneakers. The single thing that kills the film though is the utterly shitty visual effects of the shark. These are cheap, are not in the slightest convincingly inserted into the live-action footage and most certainly count as the single worst effects in the entire history of the Gonzo Killer Shark Film. They even make the effects in Birdemic: Shock and Terror (2008) look professional. Although perhaps the most ridiculous of the ridiculous scenes are when the shark develops a pair of legs and what look like stubby body builder arms and starts walking up onto land.

The film has a fairly minimal plot. Three people go for a boat ride, end up stranded on an apparently abandoned island (which despite its abandonment seems inhabited enough to have mown lawns and pathways). There they encounter a Nazi mad scientist (played by Polonia regular Jeff Kirkendall with an occasionally remembered Germanic accent) who introduces a Mad Scientist scheme to unleash Franken-sharks with human brains inside them, including plans to place Hitler’s brain into a shark. The Hitler shark is unleashed, various people are killed, including an aging porn star on a photo shoot. It sounds a lot more schlockily entertaining than it is. In actuality it is all delivered with a minimum of effort and technical proficiency.

You can gain some amusement out of the constant asides and genre in-references. Jeff Kirkendall’s mad scientist plans to place the Frankenstein monster’s brain into a shark and then floats the possibility of using Hitler’s brain next. “You mean they saved Hitler’s brain?” it is immediately asked, quoting the title of the Z-budget They Saved Hitler’s Brain (1964). Or when the angry mob of villagers turn up it is commented, “They look like the mob from a Universal horror film.” The most amusing of these is the scene where the film nerd gives a list of the Universal Frankenstein Films, which they do correctly in chronological order, and then proceed on to list the Hammer Frankenstein films, only to end up missing two from the list – respectively the third and fourth entries, The Evil of Frankenstein (1964) and Frankenstein Created Woman (1967).