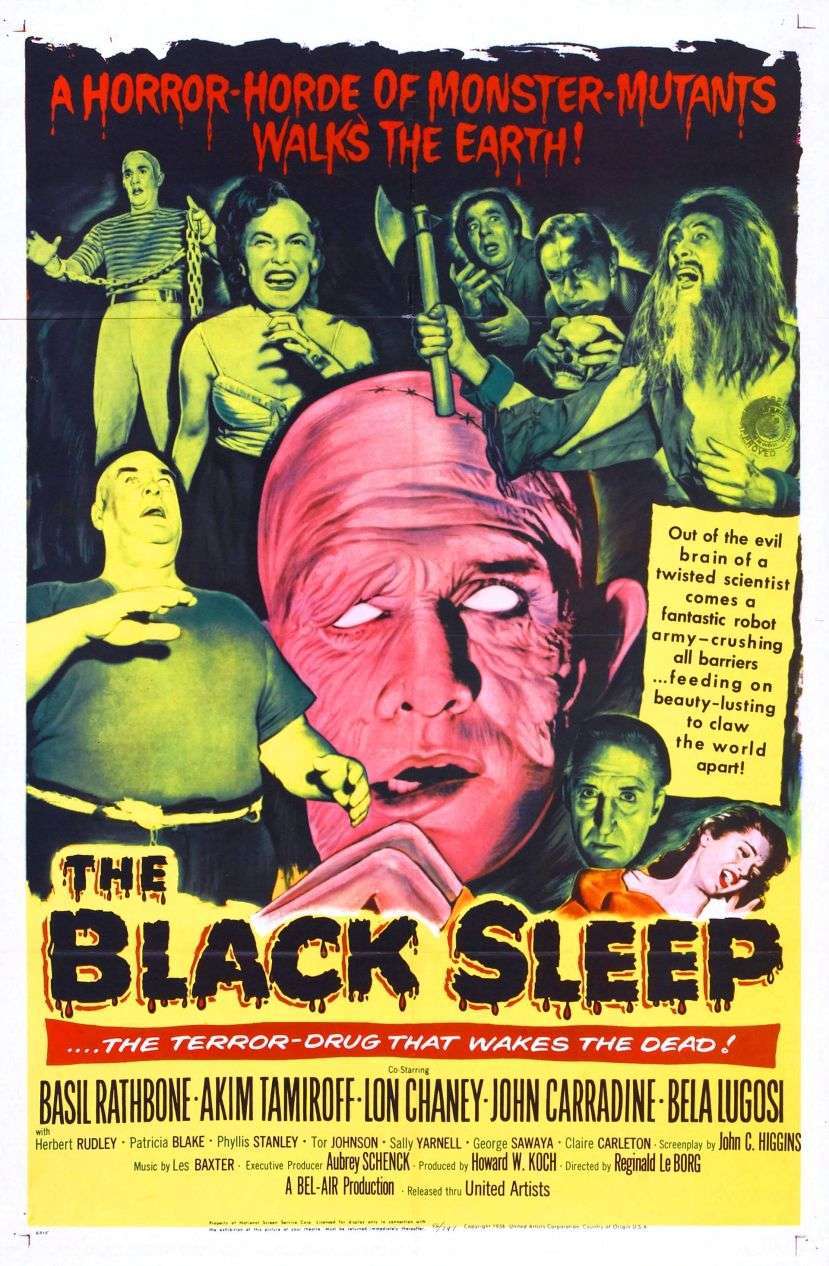 London, 1872. At Newgate Prison, Dr Gordon Ramsay is about to be executed for the murder of a man but swears he is innocent. The night before he is due to go to the gallows, he is visited by his old mentor, the distinguished physician Sir Joel Cadman. Cadman leaves Ramsay with a dose of the Indian drug mindantera, which will place him into a death-like coma. Ramsay takes it, is certified as dead and is then revived at Cadman’s home. Cadman explains that he has saved Ramsay because he needs an assistant for his research. Cadman shows Ramsay his experimental work using mindantera to place patients under while he cuts open and explores their brain, trying to work out which areas control what actions. As he assists, Ramsay becomes horrified to discover that Cadman’s ruthless quest for knowledge has turned all of his subjects into deformed and mindless vegetables that he keeps imprisoned in the basement.

The Black Sleep could be considered maybe the last gasp of the classic mad scientist film that began with Frankenstein (1931) and reached its peak during the 1940s amid a host of cheap efforts churned out at low-budget studios like Monogram and PRC, usually starring Bela Lugosi. After around 1947, the mad scientist film began to die off with the exception of a few stragglers and the genre instead became preoccupied with alien invaders and atomic monster films.

The Black Sleep can be considered a swansong to the era. It brings together some of the most famous genre actors of the 1940s – Bela Lugosi, Lon Chaney Jr and John Carradine. There are also a couple of others who are associated with the genre but didn’t so much belong to that decade – Basil Rathbone who did appear in a few horror films but was most famous during the 1940s as Sherlock Holmes in the series of films made at Universal, and wrestler Tor Johnson who was part of the Edward D. Wood Jr stock company in the 1950s.

The Black Sleep feels like a Monogram/PRC mad scientist film made with a slightly better budget. There are times it seems to almost be taking a more serious minded, less schlocky approach and setting everything amongst the frontier of medical research in 19th Century England – it initially has more in common with a film like Corridors of Blood (1962) than it does with a typical Bela Lugosi film of the last decade.

The early sections create a (relative) sense of medically grounded realism, although it is not long before typical tropes of the genre kick in – the ethically challenged scientist; a madman (Lon Chaney Jr) in the house; a mute retainer (Bela Lugosi); deformities of failed experiments kept in the cellar; a scientist’s innocent daughter needing saving; laboratories improbably hidden beneath swivelling fireplaces in the library.

Some of this has a modest effect. The main problem is that The Black Sleep is still a low-budgeted film and director Reginald LeBorg lets it take place amid limited sets, which leads to a film that is talky and static at best. Nevertheless, the film stands out somewhat because of its better production values and passable direction that elevates what otherwise might have been hackneyed material.

The name cast are employed with mixed effect. Basil Rathbone gives a wonderfully autocratic performance in the lead – he reminds very much of the role that Peter Cushing solidified as his own in The Curse of Frankenstein (1957) and sequels the following year. Akim Tamiroff proves a scene-stealer in a wonderfully oily and obsequious role as Rathbone’s Gypsy fixer.

Lon Chaney Jr and Bela Lugosi were at best limited actors who only gained the status they had by appearing in hits at early points in their careers and becoming typecast in the horror genre thereafter. Here Chaney has a role that requires him to do one of the two things he did best – play either simple-minded or hulking.

Bela Lugosi never gets to do much in what would be his last ever completed role – the only other work he appeared in subsequent to this was the unfinished fragments that were posthumously incorporated into Plan 9 from Outer Space (1959). Disappointingly, for what was his last real performance, it is one where he gets no lines and is rarely on screen. Both John Carradine and Tor Johnson get even less screen time in their roles as failed experimental subjects who are discovered in the cellar near the end.

Director Reginald LeBorg (or frequently credited as Reginald Le Borg) was an Austrian immigrant who worked as a B-budget director in Hollywood between the 1920s to the 1970s, mostly being known for a number of the entries in the Joe Palooka series. His other genre films include:- the Inner Sanctum thrillers Calling Dr Death (1944) and Dead Man’s Eyes (1944); the clairvoyance film Destiny (1944); Jungle Woman (1944), the second in Universal’s series starring Acquanetta as a were-ape woman; The Mummy’s Ghost (1944), the fourth of Universal’s Mummy series; Weird Woman (1944) about witchcraft in academic circles; Voodoo Island (1957); The Flight That Disappeared (1961) about a planeload of people being abducted in mid-flight; the possession film Diary of a Madman (1963); the psychic thriller The Eyes of Annie Jones (1964); and the psycho-thriller So Evil, My Sister (1974).