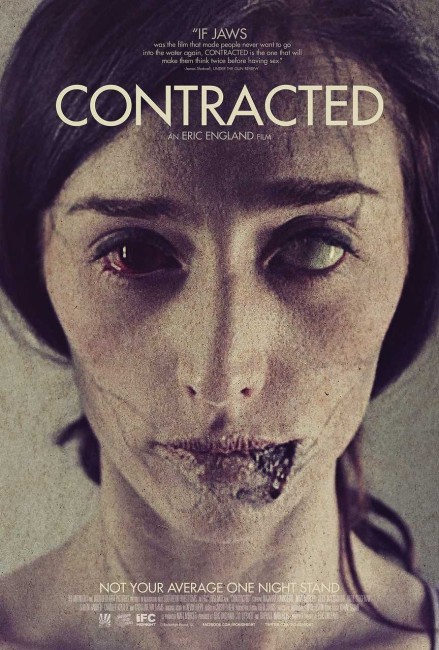 L.A. waitress Samantha England is having problems with her girlfriend Nikki and has moved back in with her mother who is religiously disapproving of her lifestyle. She goes to a party, only to get drunk and end up having sex in the back of a car with a guy BJ. The next day, she is not feeling well, has a pallor, a rash on her skin and a heavy period, even though a doctor can find nothing wrong. She next wakes to find her eyes have turned red and that her hair, teeth and nails are progressively falling out. She learns that the guy BJ is sought by police who are now urgently trying to find anybody he came in contact with.

Contracted was the fourth film from Arkansas-born filmmaker Eric England. England seems to prefer the horror genre and has previously made several low-budget efforts with the likes of Hostile Ground (2010), Madison County (2011) and Roadside (2013), as well as an episode of the horror anthology Chilling Visions: 5 Senses of Fear (2013). None of these others are particularly well known, nevertheless seemed to gain sufficient attention for England to be able to come to L.A. to shoot Contracted and obtain a semi-decent budget to do so. England subsequently went on to make the non-genre Get the Girl (2017), Huntsville (2017) and Josie (2018).

I haven’t seen any of Eric England’s other films but given that they seem to attract reviews about being cheap and derivative, one did not expect much from Contracted. That said, I was surprised by the film. England shows some sophistication in the way he allows much of the initial set-up to take place in terms of subtlety and nuance carried by his actors. England’s discovery in Contracted is Najarra Townsend, an actress who has been bubbling away without notice in minor parts since the mid-2000s. With heart-shaped face and anime-sized eyes, Townsend has a captivating beauty. The horror of the film is the simple effect of seeing her beauty being corrupted and physically ruined.

The film becomes progressively more horrible as we watch Najarra Townsend’s decay taking place – at first rashes on the skin, then thickets of hair falling out from the back of her head, clumps of blood in her period, her nails falling out, her teeth coming out and later shown as rotted. In particular, there is something unnerving to seeing Townsend with one eye turned scarlet red (followed by the other and then both later turned pale yellow). What exactly is happening and who the man who infected her is is kept vague and unspecified in the background of the film (we never even see his face).

The background of the film is constantly filled with imagery that suggests a link to sexually transmitted disease – banners for the AIDS Walk on a bus stop, STD warnings and big jars of condoms in the doctor’s surgery. What we have feels like an hysterical 1950s anti-VD film crossbred with something like David Cronenberg’s Rabid (1977) or perhaps even more so The Fly (1986) and its unnerving focus on the horrors of physical decay and mutation.

All of this works rather well. There is undeniable shock to watching Najarra Townsend’s decay. On the other hand, the weakness of Contracted is that it seems to lack a third act – a sense of where to take the film beyond showing us the physical degeneration of its leading lady. To this extent, Eric England starts throwing in a series of set-pieces that has Najarra killing various other supporting characters – but these seem unmotivated, more there as though there was the sense that the film had to keep escalating its horror scenes. This becomes particularly evident towards the end where the film wraps the show up simply by having SWAT teams turn up and shoot Najarra as she goes feral and attacks her mother.

You might want to contrast Contracted with the far more effective and lower-budgeted Canadian Thanatomorphose (2012), a very similar film that charted the progress of its heroine’s decay. Thanatomorphose pushed things much further and went all the way. Other characters featured peripherally and were attacked but seemed less important; rather the focus of the story stayed within the heroine’s apartment and went from initial outbreak all the way to her reduction to a skeletal pile of goo. Another film of contrast might be the similar subsequent Starry Eyes (2014).