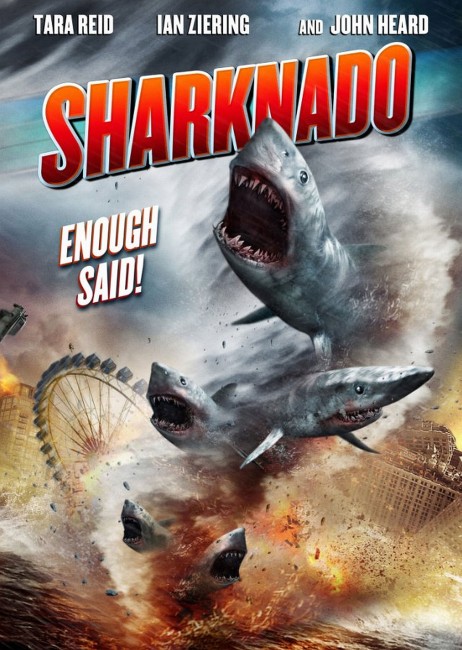 Fin Shepard is a former surfing champion who runs a bar at the Santa Monica Pier. He flees with his friend Baz, barmaid Nova and regular customer George as a hurricane floods the pier. The flooding waters bring with them hundreds of sharks that have been sucked up by the storm. As they head onto the freeway to rescue Fin’x ex-wife April and teenage daughter Candice, the floodwaters bring the sharks up into the streets, attacking everything they encounter. As the group head inland, a typhoon sucks the sharks up into a vast waterspout and causes them to start raining down from the sky.

Sharknado was a surprise hit. It arrived with the same kind of instant full-born bad movie sensation that Snakes on a Plane (2006) did a few years ago. During its premiere on the Syfy Channel, there were live Twitter feeds ridiculing every aspect of the film. The term ‘sharknado’ was even appropriated by news headlines and taken up in popular parlance, while the film gained sufficient word of mouth that people who don’t usually follow this type of film were asking me what it is all about. Within days, The Asylum had announced a sequel and took to social media to get fans to suggest a title. Moreover, it was one of the first films from The Asylum to actually receive a theatrical release, being quickly repackaged as a midnight special.

The question I had watching Sharknado was just how much of it was The Asylum making another absurd shark movie with an outrageous premise and how much was it the unintentionally bad film that most audiences seemed to be greeting it as akin to something like The Room (2003) or Birdemic: Shock and Terror (2008). There seems something redundant about a group going “that was sooooo bad” to a film when it was precisely intended that way – what it feels like is a group of people who fail to get the joke in realising that this is exactly the way the killer shark film has been heading since the late 00s. The problem with bad movie audiences is that they force people to regard everything through a certain set of blinkers where everything is evidence of the film’s badness. I get irritated with this – Mystery Science Theater 3000 (1988-99, 2017- ) being a particularly bad offender – where people are invited people to ridicule what might otherwise be perfectly good films because they are sometimes hampered by budgetary shortcomings and such like.

Sharknado comes with plenty of absurd dialogue. Like Cassie Scerbo’s exclamation “What the hell! There’s sharks in the streets” – and sure enough we see sharks swimming alongside the cars. There are constant lines of people exclaiming how absurd everything is just before they are eaten – “Sharks in the swimming pool? That’s ridiculous” says Christopher Wolfe before a shark dives through the living room window to eat him or where Robbie Rist – the now growed-up genius kid from Galactica 1980 (1980) playing a big nerd – jumps in joy at surviving “my mother told me Hollywood would kill me” seconds before a flying chunk of the Hollywood sign lands on top of him.

The film seems to trying to create as many absurd seeming shark attacks possible – a shark bursting through the window of the bar and disappearing behind the pool table as it attempts to devour someone before Cassie Scerbo stabs it with a pool cue; John Heard beating one shark off with a bar stool as it flops along the pier after him; a shark diving out of a swimming pool and through a living room window to devour Tara Reid’s boyfriend and then prowling through the flooded living room as the group scurry up the stairs; a shark impaled through the roof of an SUV, snapping at the passengers as they drive along the street. The film never seems to think about the logistics of some of its scenes – the shark pursues the people through the flooded living room and they make an escape by getting outside and simply driving away where it never seemed to occur to the filmmakers that if surely the living room were flooded to waist height (and the group didn’t have to go up a level to get out) then surely the lawn and driveway outside would be under water too.

The film’s most absurd scenes are the ones where we get a big drama as Ian Ziering must abseil down from a bridge to rescue a school bus full of children whereupon a shark starts climbing up the rope after him. Or the scenes toward the end where all the sharks are sucked up into a tornado that spins around in the sky with them in it. The scheme to get rid of the sharknado involves people flying over in helicopters and driving SUVs into the twister and detonating explosives, which leads to the absurd images of a shark hanging onto the end of a helicopter strut and causing it to go down. The prize moment – the one that is the equivalent of the scene in Mega Shark vs Giant Octopus where the giant shark leaps out of the water to bite the airliner in half – is where a shark falls from the sky, Ian Ziering jumps up towards it and allows himself to be devoured, before the shark falls to the ground and he chainsaws himself out of its stomach.

As with many of The Asylum’s films, they are cast with former names now eking out careers in B movies. Top-billed is Tara Reid who once came to fame in American Pie (1999) and has since maintained a career that has placed more prominence on being a Hollywood party girl. Here she gives a performance that shows she either regards the film around her in disdain or else has turned up on set with the coked-out zombiefication of a Lindsay Lohan just before nobody would employ her. The unknown Cassie Scerbo in fact gives a much more determined and engaged performance than Reid does. For all her top-billing, Reid in fact gets a backseat role and most of the acting is done by Ian Ziering, the former star of Beverly Hills 90210 (1990-2000), who plays admirably seriously considering the intentional absurdity of the exercise.