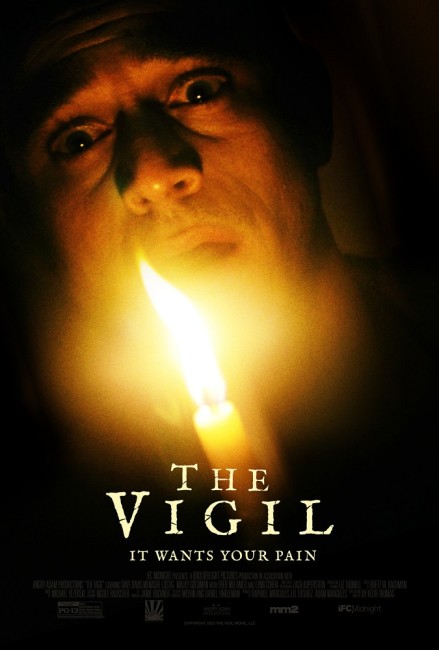 Yakov Ronen is a member of the Hasidic Jewish community in New York City. Following an incident in which his younger brother was killed during a racial attack, Yakov has lost his faith and shaved his payots. This has left him struggling with mental health issues and to maintain a living. He is approached by Rabbi Reb Shulem who offers Yahov $500 to act as a shomer, someone who sits and reads the psalms in an all-night vigil for the recently deceased. Yakov accepts and is taken to the apartment where Ruben Litvak died. Litvak’s elderly, dementia-ridden widow warns Yakov away. As Yakov begins his vigil, he begins to see things around the house. He comes to believe that Ruben was inhabited by a demon known as The Mazzik but cannot be sure if the nightmares he now faces are supernatural or due to his mental health.

The Vigil was a directorial debut for Keith Thomas. Thomas is Jewish and has a master’s degree in religious education from New York’s Hebrew Union College. (It was there he says he came across the ideas of the Mazzik). The Vigil should not be confused with Vincent Ward’s superlative Vigil (1984) or the standout British tv mini-series Vigil (2021), a detective story set on a nuclear submarine.

Judaism has only been intermittently depicted on screen in fantastic cinema. We have had occasional concepts borrowed – The Ark of the Covenant in Raiders of the Lost Ark (1981); the mediaeval notion of the Golem in films like The Golem (1920); the idea of the dybbuk demon in The Possession (2012) and Demon (2015). There have been very occasional fantastic films set around the practice of Judaism itself as with Simon Magus (1999) and the remake of The Golem (2018). That’s unless one wants to get to the story of Jewish immigrant mice in An American Tail (1986). (For a more detailed listing see Judaism in Fantastic Cinema).

The Vigil is unique in that it is a horror film that takes place within the confines of New York’s Hasidic Jewish community. Thus the characters all come with authentic dress for the culture – in traditional dark overcoats and black hat. There is much focus on the rituals – the need for the shomer to read the psalms to the dead in an overnight vigil. When Dave Davis binds himself to confront the forces at the end, you feel certain that it is the real thing. The film comes with such a painstaking sense of the cultural immersion that the dialogue is evenly divided between English and subtitled Yiddish.

The idea of the person sitting the lone all-night vigil with a dead body comes from the Nikolai Gogol story The Viy (1835), which has been filmed several times – the only time accurately as Viy (1967). Another comparison might be to the A Drop of Water episode of the Mario Bava anthology Black Sabbath (1963), while a very similar treatment came subsequently in Simon Barrett’s The Empty Wake episode of V/H/S/94 (2021). Keith Thomas more than effectively uplifts the premise and drops it into the middle of Hasidic rituals.

Keith Thomas delivers a bunch of horror effects – ominous noises; mysterious cellphone videos sent from someone creeping up on Davis while he naps; elderly Lynn Cohen who is sometimes lucid in the warnings she gives. One of the most effective of these is just watching Dave Davis sitting in the room with the corpse. There is such focus on the body just lying there – you have watched enough horror movies that you have the constant dread expectation that it is going to get up and move but it just sits there ominously and it is well over half the film before Thomas lets anything happen.

The film becomes especially effective during the scenes where the demonic force starts playing with Dave Davis’s sanity, making him thinking he is receiving calls and then taunting him in mid call or the real person calling in on another line. The building up to Davis’s binding of himself and going in to confront the demon is uncommonly atmospheric and effective.

On the basis of The Vigil, Keith Thomas was selected as director of the remake of Firestarter (2022).