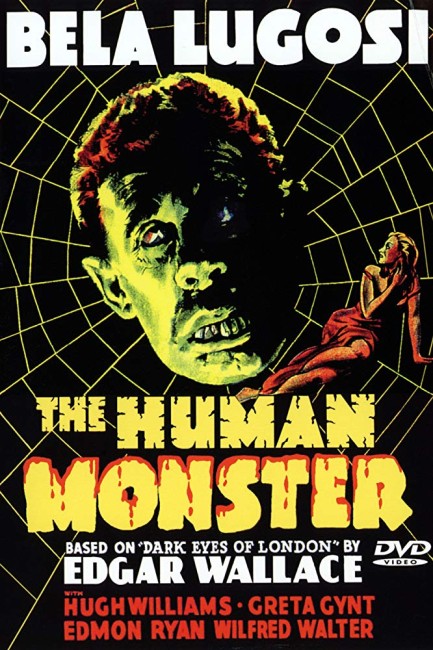 aka The Human Monster

Scotland Yard inspector Larry Holt is asked to investigate the case of five bodies that have been found in The Thames during the last eight months, all apparently drowned. The investigation takes Holt to the Greenwich Insurance Co with whom many of the dead held policies. This is run by Feodor Orloff, a former doctor who was driven out of his profession and deemed insane by his colleagues. Clues lead Holt to Dearborn’s Home for the Destitute Blind where each of the policy holders have made charitable donations at Orloff’s request. There Holt comes to believe that each policy holder is being murdered for their money.

This Bela Lugosi vehicle is almost perceived as a horror vehicle. But it isn’t. The film is adapted from The Dark Eyes of London (1924), a novel by Edgar Wallace, a popular and extremely prolific writer of crime thrillers during the 1910s-30s, and rests solidly in the detective thriller genre no matter how hard it tries to sell itself as a horror film. (It was even renamed The Human Monster in some parts of the world). However, the very act of casting Bela Lugosi as the swindling blind man (a vicar in Wallace’s novel) seems to have by association turned The Dark Eyes of London into a horror film.

It certainly tries to be a horror film – Bela Lugosi gets a hulking assistant who predictably goes out of control and take his creator down at the climax. And director Walter Summers tries to build the few killings into horrific set pieces. There are also bizarre attempts are made to make the blind institute look like a mad scientist’s laboratory with steep 75-degree angle stairs, high walls and shots showing the blind at work on bizarre cane weavings on strangely mounted boards.

As a policier, The Dark Eyes of London is passable. There are a couple of okay twists – the best surprise in the film is the scene where Bela Lugosi as Dearborn (whose thick accent has been dubbed over) inadvertently reveals himself as being able to see. The routine plot is enhanced by the likeable pairing of the handsome and decisive Hugh Williams (who looks far too young to be a full Scotland Yard inspector) and Edmond Ryan playing the cliché of a loudmouth, jocular American. Bela Lugosi does his hammily contorted thing, glaring at people with eyes wide open and leaving thick pauses in the middle of sentences, even entire words.

The sets are interesting, the dockland scenes convincing, leaving one unsure whether they are sets or real locations. However, The Dark Eyes of London never amounts to more than routine.

The Edgar Wallace story was later remade in West Germany, among a host of German Wallace adaptations during the 1960s (the krimi cycle), as The Dark Eyes of London/Dead Eyes of London (1961) and more loosely as The Gorilla Gang (1968).