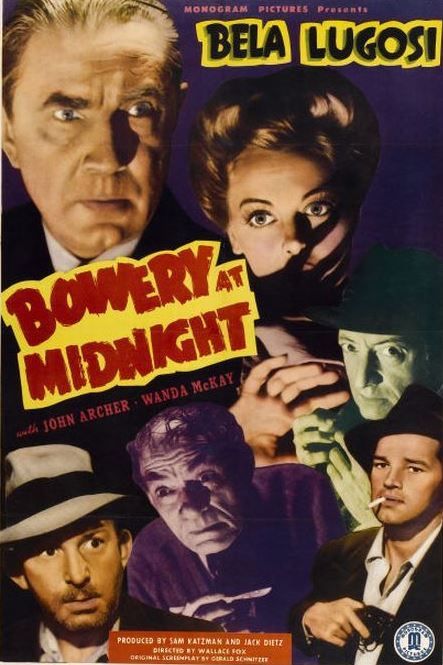 Psychology professor Frederick Brenner leads a double life where he masquerades as Karl Wagner who runs The Friendly Mission, a charity soup kitchen in New York City’s Bowery district. Behind the doors of the mission, Brenner/Wagner recruits wanted criminals on the lam into helping in his schemes to rob jewellery stores. Brenner/Wagner also takes great delight in murdering his associates during these capers. Afterwards, they are turned into zombies that he keeps in the mission’s cellar.

Bowery at Midnight was one of a mass of mad scientist cheapies that Bela Lugosi made during the 1940s. He made nine other horror films at poverty row studio Monogram alone during the decade and dozens elsewhere. This similarity of titles has led Bowery at Midnight to sometimes be confused with the horror comedies that Lugosi made at Monogram with the comedy team The Bowery Boys (also known as the East Side Kids) – Spooks Run Wild (1941) and Ghosts on the Loose (1943) – although this is not the case.

Bowery at Midnight is typical of the films that Bela Lugosi was typecast in during this era. In fact, the plot of the film seems to have substantially been borrowed from another slightly better budgeted Lugosi vehicle of a couple of years earlier – The Dark Eyes of London/The Human Monster (1939), which featured Lugosi as a doctor who had a double identity running a charitable institute for the blind as a front for criminal activities. Like The Dark Eyes of London, Bowery at Midnight is more of a crime thriller than it is a horror film. It feels like something that started out as a standard crime film but then the casting of Lugosi mandated that it be billed as horror. The sole element that places Bowery at Midnight into horror genre classification is a muddled subplot about Lew Kelly’s alcoholic doctor turning cohorts murdered by Lugosi into zombies in the cellar but this is given scanty time.

In the hands of Wallace Fox, a director used to making cheapie Westerns and serials, Bowery at Midnight is dull and static. Certainly, it does have an entertaining luridness at times – Bela Lugosi gloating over the graveyard he keeps in the mission basement with headstones marking the bodies of his murdered cohorts; or of him shooting his associates and throwing them off rooftops.

On the other hand, the script has clearly been quickly dashed off and is often confusing. It is never made clear why Lugosi’s psychology professor has to masquerade as someone running a mission and conduct robberies, other than perhaps to provide his wife with jewellery. The aspect with the doctor creating zombies is muddled and should have been brought to the forefront far more than it is, certainly for something that is billed as a Lugosi vehicle.

Bowery at Midnight was directed by Wallace Fox who made numerous B Westerns between the 1920s and 1950s. His only other genre outings were The Corpse Vanishes (1942), another mad scientist film featuring Bela Lugosi, the horror film Pillow of Death (1945) and the science-fiction serial Jack Armstrong (1947).