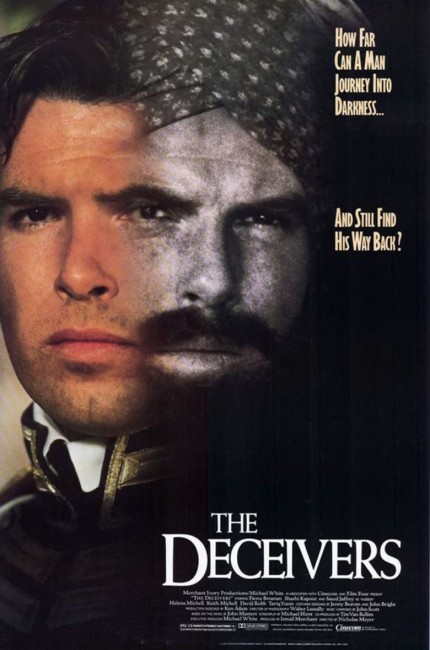 India, 1825. William Savage, a rising young captain in the British Army, travels with his new wife to take a command in the district of Marya. There he witnesses Indians strangling a group of travelers and afterwards finds a mass grave containing 68 ritually strangled bodies. Further investigation reveals this is the activity of Kali-worshipping Thuggee cultists. Disbelieved by his superiors, Savage decides to dye his skin and go undercover to infiltrate the Thuggees. However, once there, he finds himself succumbing to the cult’s influence.

This interesting production comes from Ismail Merchant and James Ivory, the producer-director team behind such acclaimed art films as Heat and Dust (1983), The Bostonians (1984), A Room with a View (1985), Howards End (1992) and The Remains of the Day (1993). Most of Merchant-Ivory’s work tends to revolve around and hold a nostalgia for a bygone era of British imperialist aristocracy, and many of the films are also set in India (Merchant’s birthplace). Merchant-Ivory return to that era with The Deceivers, claimedly a ‘based on truth’ account of the historical Thuggee cults.

The Thuggee cults existed in India between the 17th and 19th Centuries. Adherents were followers of the goddess Kali and would befriend travellers and then rob and ritually strangle them. Some two million people were estimated to have been murdered in this fashion before a brutal crackdown and elimination of the cultists by forces of the British Empire in the 1830s. Soldiers relied on an extensive network of informers to root and execute members.

The film here is adapted from The Deceivers (1925) by John Masters, an officer in the British Indian Army who wrote several other books set during the British rule of India. The character of William Savage (played by Pierce Brosnan in the film) is based on William Henry Sleeman, the British officer who spearheaded the campaign against the Thuggees (although unlike his fictional counterpart, Sleeman did not go undercover as a recruit). The fascination with the Thuggees was such that a derivation of the Hindu word entered the English language as thug.

Merchant-Ivory have handed the directorial chair over to Nicholas Meyer, novelist of some of the wittiest of the Sherlock Holmes pastiches, most famously The Seven Per Cent Solution (1973) and The West End Horror (1976) but in particular as a genre director with films such as Time After Time (1979) and his work on the Trek films (see below).

Merchant-Ivory serve the production up on a reasonable budget – the film certainly looks good, as their films always do. However, the plot is strictly second rate and frequently sinks into some horridly melodramatic devices – about Pierce Brosnan having to pose as the suicidal woman’s husband and then later meeting him. Nicholas Meyer, who is a far better writer than the script in the film, directs rather routinely. At times, he does rise to create some occasionally striking imagery – a love sequence between Pierce Brosnan and a Thuggee whore whose shadow on the wall suddenly develops six arms. Occasionally, Meyer’s symbolism – Pierce Brosnan eating the sacred sugar of Kali intercut with his wife Helene Michell receiving Holy Communion – is heavy-handed. Despite being a relatively lavish production and starring a popular actor in Pierce Brosnan, The Deceivers has been little seen.

Nicholas Meyer also directed Time After Time (1979) where H.G. Wells pursues Jack the Ripper through time to the present; Star Trek II: The Wrath of Khan (1982), regarded by most Trek fans as the best of the film series; the controversial nuclear war tv movie The Day After (1983); and the last of the classic Trek films Star Trek VI: The Undiscovered Country (1991), as well as a couple of non-genre comedies. His other genre entries include the scripts for Invasion of the Bee Girls (1973), the tv movie The Night That Panicked America (1975) about the infamous 1938 Orson Welles War of the Worlds radio broadcast; and The Voyage Home: Star Trek IV (1986). From the late 1990s, Meyer moved away from directing to writing scripts such as Sommersby (1995), The Prince of Egypt (1998), The Human Stain (2003) and Houdini (tv mini-series, 2014), plus created the tv series Medici, Masters of Florence (2016– ). He also produced the epic tv mini-series The Odyssey (1997), the Arnold Schwarzenegger action vehicle Collateral Damage (2002) and the tv series Star Trek: Discovery (2017– ).