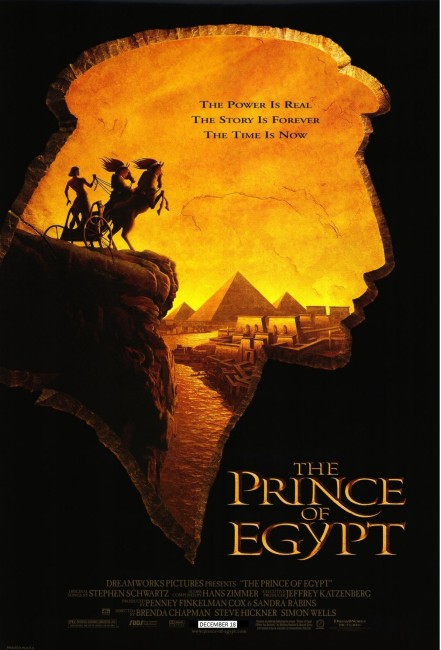 To spare her child a life of slavery under their Egyptian masters, a Hebrew mother places her infant son in a crib and sets it adrift on The Nile. The baby is found by the Pharaoh’s wife where it is duly adopted by the Royal family and named Moses. Moses grows up unaware of his origin. He is perpetually causing mischief with his brother Rameses, the heir to the throne. A chance encounter between Moses and his sister Miriam reveals his true identity and shows Moses how cruelly the Pharaoh treats the Hebrew people. Fleeing from Egypt after he accidentally kills a man, Moses receives a vision from God in the desert. God appoints him to return to Egypt and demand the freedom of the Hebrew people. However, Rameses’ stubborn refusal to allow their freedom results in God calling a series of plagues down upon Egypt.

From Steven Spielberg’s DreamWorks SKG combine came The Prince of Egypt, their first serious attempt to unseat Disney as the kings of animation. Steven Spielberg has always had a strong interest in animation – having executive produced the likes of An American Tail (1986), The Land Before Time (1988), We’re Back: A Dinosaur’s Story (1993) and Balto (1995).

The project that DreamWorks turns to here is no less ambitious a one than the story of the Old Testament Exodus. (It was a subject that, in light of Spielberg and his DreamWorks partner Jeffrey Katzenberg’s Jewish ethnicity, quickly had the project dubbed The Zion King). One had a horrible premonition that this was going to result in a version of The Ten Commandments where Moses was accompanied by cute talking animals. However, The Prince of Egypt is laudable for the sobriety of its treatment – the nearest it ever comes to throwing in slapstick relief is in the two minor characters of the bumbling Egyptian high priests voiced by Steve Martin and Martin Short.

Before the film has even begun, the credits openly admit that some licence has been taken with the Biblical story. The Prince of Egypt is nevertheless scrupulous in its attempts to tell the story – it is the only animated film where one can claim to have seen not only an historical adviser but also an archaeological consultant among the credits. The end credits also contain quotations from both the Old and New Testaments and the Qu’ran that give the impression the film is being as scrupulous in its attempt to be across the board in the ecumenicism of its appeal as possible.

For the most part, the Biblical story is not too badly dealt with. Certainly, the film does simplify the Biblical account, notably in curtailing what happens after the parting of the Red Sea. Thus the forty years in the wilderness are dismissed; the Ten Commandments are tossed in as a sort of epiloguic after-thought; and when Moses returns from the mountain it is to awe-struck acclaim rather than the anger of seeing the Israelites worshipping a golden calf. The most notable embellishment is the turning of the Pharaoh into Moses’s adopted brother and the entire battle for the freedom of the Hebrew people into a bittersweet sibling rivalry – which certainly gives the story more emotional resonance.

At every opportunity, The Prince of Egypt tries to impress. Dramatically enthralling chariot race sequences, vistas of thousands of toiling slaves and fleeing masses in the background of every wide-angle shot, locust storms, dream sequences where Egyptian pictographs come to life. The parting of the Red Sea is shrewdly made into the climactic set piece of the film and is a dazzling show-stopper. There is also a genuinely eerie sequence where a spirit moves through the land striking dead the first-born.

In fact, The Prince of Egypt is one of the most violent animated films in recent years – the killing of the first born, the deaths of numerous Egyptian soldiers. There is a certain irony to this in that it is the conservative religious faction that have increasingly pushed for the censorship of violence in animation such that most old Warner Brothers shorts are now routinely edited for tv. Yet when a realistic version of the Jewish Exodus is portrayed on screen, it comes out as seeming incredibly violent. The result is that the sudden introduction of violence into the now expectedly anodyne realm of the animated feature is something that makes Jehovah seem even more cruel and inhumane a God than another reading might otherwise do.

Of the three directors, Simon Wells had previously made An American Tail: Fievel Goes West (1991), We’re Back: A Dinosaur’s Story (1993) and Balto (1995), before going onto the remake of The Time Machine (2002) from the classic book by no less than his great-grandfather H.G. Wells, and returning to animation with Mars Needs Moms (2011). Steve Hickner went onto co-direct DreamWorks’ Bee Movie (2007), while Brenda Chapman went onto co-direct Pixar’s Brave (2012).