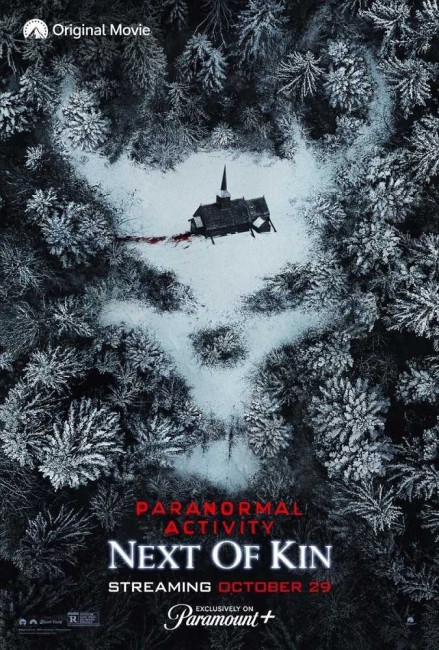 Margot was abandoned as a baby on the steps of a hospital. As an adult, she has taken a DNA test that has revealed that her mother was Amish. She meets up with former Amish member Samuel who takes her to meet the rest of the group her mother came from. Joining them is her friend Chris who is making a documentary about the trip, along with the hired soundman Dale. On the Amish farm, as Margot tries to ask questions about who her mother was, she finds this opens up secrets that the Amish are hiding.

In the outpouring of streaming media in the late 2020s, most content producers have taken a lazy low road and done no more than recycle past successes. It is the era of intellectual property endlessly regurgitated in remakes, reboots, sequels, prequels, origin stories, sidequels and spinoffs. The Paranormal Activity series officially ended with The Ghost Dimension in 2015 but Blumhouse, Oren Peli et al decided to resurrect it for one more outing here. Next of Kin was originally slated for theatrical release but due to the Corona Virus lockdowns in place and theatres closed in many areas, it premiered on the Paramount+ streaming network instead. The producers went out of the way to inform the public that this new film in the series was not related to the other ones and was a standalone work, although you could easily draw a connection to see a shared universe in the plots about people dealing with secretive devil worship cults.

Paranormal Activity: Next of Kin comes from William Eubank who has made an undeniably interesting body of films with Love (2011) about an astronaut stranded in orbit, the very strange alien abduction film The Signal (2014) and Underwater (2020), an underwater monster movie that should have received better reception than it did. To Eubank’s credit, Next of Kin looks great as Found Footage goes. The landscapes are all snowy winters. The production design team has made an effort to create a farm full of barns, workshops, churches and the like that look uniquely designed. (At least I presume they are sets as opposed to the production crew having gone on location at a real Amish farm).

Next of Kin shakes up what we expect of a Paranormal Activity film. It still employs the Found Footage format but William Eubank far more adventurously offers a variety of different formats – drone camera, GoPro and infra-red. All of the other Paranormal Activity films are centred around fairly minimal variations of watching security camera footage or occasionally handheld cameras as spooky happenings occur in people’s homes. This drops all the security camera footage and takes the show outside of suburban family homes.

What Next of Kin resembles is far more Blair Witch and one of the numerous Found Footage copycats that followed Paranormal Activity’s success with people armed with cameras investigating UFOs, haunted houses and assorted other phenomena – indeed, the Found Footage treatment of people venturing into a cult had previously been done in Ti West’s The Sacrament (2013). (One quibble I have is how it is possible to identify that one is Amish from a DNA test – granted the Amish will marry within a small genetic pool but it seems to stretch believability to say that one can identify religious belief from DNA).

The unfortunate downside of this is simply that the Found Footage format has been so strip-mined by filmmakers since Paranormal Activity came out that there are no new moves open to Next of Kin. You spend much of the film comparing everything to other films – the descent down into a deep dark hole was done in The Borderlands (2013). The infra-red scenes with Emily Bader hiding under the bed in the attic as something lurks kept flashing me back to the climax of [Rec] (2007) and you keep sitting there with the expectation that something would drag her away. Next of Kin promisingly looks in new directions but in the end it feels trapped in a tiny genre niche where all creative possibilities have been exhausted.