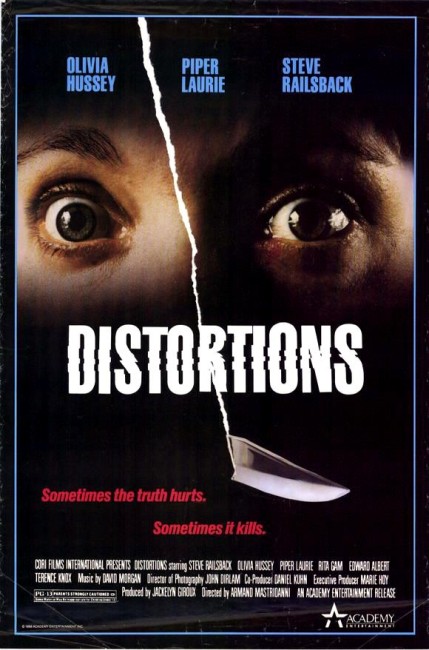 Amy Marks receives news that her husband Jason has been burned alive in a car crash. Immediately after, she starts to have visions of the burnt Jason and is followed by mystery men. Her aunt Margot thinks she is having a nervous breakdown and insists that Amy move into her house. However, once Amy is there, Margot starts drugging her in an effort to obtain Amy’s $2.5 million insurance payout.

Distortions is a film that has clearly been modeled on the formula of the various Hammer and William Castle psycho-thrillers of the 1960s. However, the film has a thorough drabness and blandness that makes it look like an extremely cheap made-for-tv movie. Armand Mastroianni is a cousin of Marcello Mastroianni and has directed a number of largely forgettable genre efforts – He Knows You’re Alone (1980), The Supernaturals (1986), Cameron’s Closet (1988) and various Robin Cook tv movies.

Distortions is Armand Mastroianni’s worst film. It is crudely directed and lacking in any suspense. For the greater part of the film, there is no plot at all, just an endless procession of jumps, false and imagined scares, hints of conspiracies, and stringings out of Olivia Hussey’s inability to convince other people of her plight. All the time, a cheap electronic score tries to convince one there is atmosphere to the proceedings. (It fails).

The plot should win some sort of award in managing to tie every single person in the supporting cast into one of the schemes to try and deceive the heroine in some way or another. The twist ending is undeniably effective but is ruined by the double twist that comes on top of that.

Olivia Hussey is well cast – her frail child-woman innocence is perfect for the mentally unstable character she is cast as here. Similarly, Piper Laurie plays to the hilt, the way she can with haughty demeanour and tremblingly passionate voice. The show around them however is not worth the effort.