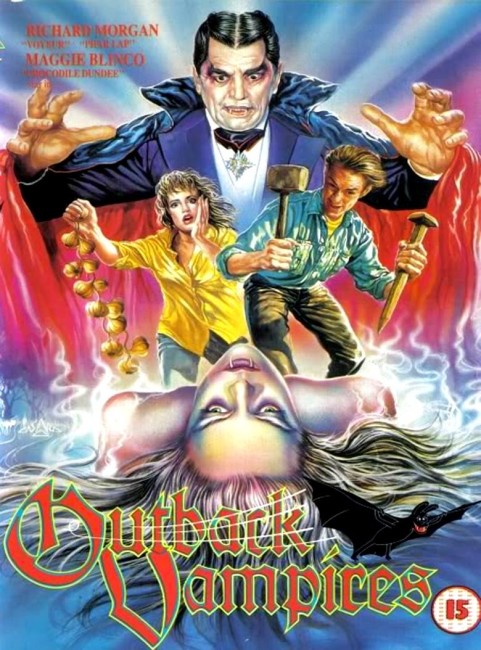 Best friends Nick and Bronco are driving through the Australian Outback on their way to a rodeo. They offer a ride to the knife-thrower Lucy but their car breaks down not far ahead. The three of them walk to the nearest town where they encounter the strange locals. The townspeople have no mechanic or even vehicle to drive them on. It is recommended they go to seek help at the mansion of Sir Alfred Terminus. Sir Alfred proves welcoming but the three soon find that Sir Alfred and his strange family are vampires.

Colin Eggleston (1941-2003) was a minor name in the great era of Australia’s Ozploitation film. Eggleston emerged out of television and made his first and best work with the Nature’s Revenge film Long Weekend (1978). He went on over the next few years to make a series of uneven genre films with the likes of the psycho-thrillers The Little Fella (1982) and Innocent Prey (1984), the adventure film Sky Bandits/Sky Pirates (1985) and the precognition horror Cassandra (1987). Outback Vampires would be his final film.

Outback Vampires starts out as the quintessential Strange Outback Town tale. We have seen variants on this in assorted Australian films like Wake in Fright (1971) and The Cars That Ate Paris (1974) – an Outback community filled with exaggerated caricatures and grisly carnivalesque horrors. All the locals are cartoonish figures with accents that could be used as buzzsaws. The heroes themselves are not much better – we are introduced to them driving along in their open-top coupe singing lines like “Sucking on a stubbie/Put your finger up a yuppie.” (A stubbie is Australian slang for a can of beer).

Things become even more ridiculous with the introduction of the vampires. These scenes look less like a vampire film and more like a bad amateur copy of The Rocky Horror Picture Show (1975). The respective actors playing the vampires are encouraged to outrageously overact and camp it up. There are an extended series of scenes with them chasing the three heroes around halls drenched in mist and backlight and/or trying to seduce them. For no apparent reason, an entirely forgotten New Wave band turns up to perform a song at one point.

At least the film does get in weird H.P. Lovecraft references with Antonia Murphy mentioning the worship of The Great Old Ones and Yog-Sothoth.