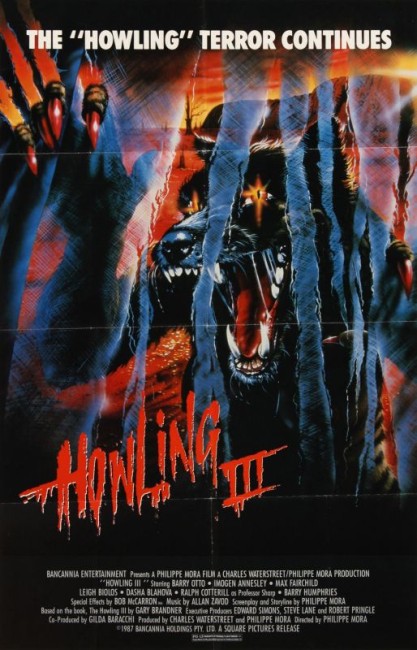 aka The Howling III: The Marsupials

Jerboa flees from her family in the small Australian desert town of Flow and comes to Sydney. There she is spotted by Donny Martin, an assistant on a low-budget horror film, who recruits her an actress because of her feral quality, even though she has never even seen a film before. However, at a party she transforms into a werewolf. She is captured by military and scientists who are fascinated with her, even more so when it is discovered she is a special brand of marsupial werewolf and is pregnant with child. Her family rescue her from the hospital. The scientists then find a Russian defector ballerina who is also a werewolf. Meanwhile, the military head to Flow, determined that the marsupials must be hunted down and exterminated.

This was the third film in the series that began with Joe Dante’s cult werewolf parody movie The Howling (1981). The series would later end up extending to nine films in all. (See below for the other titles). Director Philippe More had also made the previous entry in the series, the universally reviled The Howling II/The Howling II: Stirba – Werewolf Bitch (1985), and returned to his native Australia for this effort.

You have to give Philippe Mora full credit for his conceptual wildness. A breed of marsupial werewolves – a breed of Australian marsupial wolves do in actuality exist – and we end up seeing one with a pouch; an ingrown community of werewolves; werewolf nuns; werewolf ballerinas; attempts to scientifically study the werewolf transformation; the spirit of the werewolf ancestor prime.

Sadly, all of this fails abysmally. The werewolf effects are cheap and terrible, especially the birth of the baby and a laughable scene where a group of hunters are attacked by the charred skeleton of a werewolf. There is one nifty effect of a ballerina transforming in mid-pirouette and tearing apart the human male dancer who leaps into her arms – the conception is great, even if the execution falls completely flat in Mora’s direction.

Philippe Mora has made a some okay films – The Beast Within (1982), The Return of Captain Invincible (1983), Communion (1989) – but it as though everything he demonstrated on those has lapsed into unabashed amateurishness here. The scares he attempts to generate are lame – an Aboriginal man jumping into frame in broad daylight howling, a hand falling down into the edge of a doorway before being revealed to be a sleeping man.

Quite clearly, he fails to take the film seriously as witness an appearance by Barry Humphries’ Dame Edna Everage. The Howling didn’t take itself too seriously either, but at least Joe Dante treated what he was doing and treated the audience with respect and .invited us into a shared joke. This is a film that makes it all into a bad joke – as witness the playing of All Fall Down as a man falls out the window.