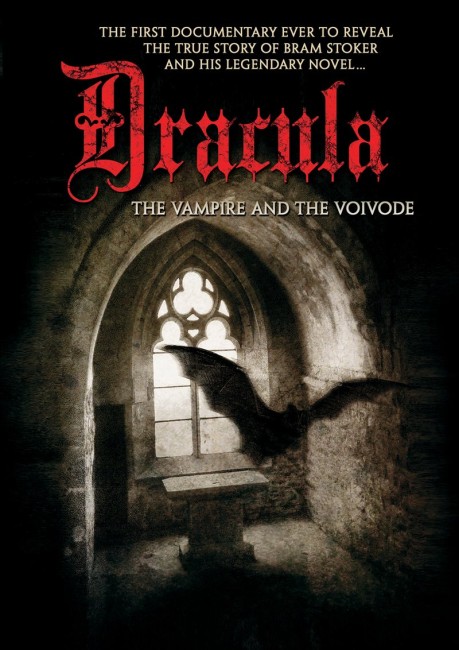 Dracula: The Vampire & the Voivode is a documentary that sets out to track the origins of the fictional character of Count Dracula. It comes from relatively unknown Welsh documentary-maker Michael Bayley Hughes and is produced in association with The Transylvanian Society of Dracula, a group of Romanian academics and historical enthusiasts who are seeking to rectify the region’s reputation in the public’s mind. Much of the same material was covered in the earlier documentary In Search of Dracula (1975), although that readily brought into all of the superstitions about the region, which this seeks to dispel.

Dracula: The Vampire & the Voivode traces the way that Bram Stoker first created the vampire count in his novel Dracula (1897) and then goes in search of the historical Dracula, Vlad Tepes, whose name Stoker borrowed. Dracula has so permeated fiction and cinema as a character – indeed, Stoker’s Dracula gave rise to what is accepted as modern vampire lore – that it is fascinating to see something that goes back and explores how all of this came together. That said, this is undeniably a documentary made for the hardcore fans of the book, as opposed to those who come to Dracula via the movies (where I would argue that the bulk of the character’s life exists) with the film incarnations of Dracula being glossed over in under a minute towards the start.

The first sections of Dracula: The Vampire & the Voivode deal with who Bram Stoker was. The filmmakers travel to Ireland and look at the modern equivalent of the locations where he grew up. They do an impressive degree of research into the life and background of Stoker from his beginnings as a civil servant, to surprisingly the attribution of the modern Irish theatrical tradition to him as a result of the unpaid theatre reviews he published in the Dublin Evening Mail, to his meeting with actor Henry Irving and how he moved to London to work as Irving’s manager for many years.

The film painstakingly seeks to find inspiration for aspects of Dracula from every aspect of Bram Stoker’s life – seeing that he based his imagining of Transylvania (which he never visited) on his tours around the rural Irish countryside to drawing connections between the leering figure of Dracula and Henry Irving’s performance as MacBeth, even suggesting that the idea of a cross as a means of warding off a vampire was inspired by a performance of Faust. There is a visit to St Michan’s Church in Dublin near where Stoker grew up, which has a remarkable set of mummies that have been preserved due to the conditions created by the peat bogs in the area and the suggestion that as a child Stoker may have gained ideas of the undead from seeing these. There is a visit to the English town of Whitby where locals take the documentary crew on a very detailed tour of the locations mentioned in the book.

Although there are times that the film’s digging for detail perhaps becomes overly literal or seeks to draw too much in the way of associations – seeing connection between Stoker’s living in St George Street and the mention of a St George festival in the book, or attributing significance to a Lupus (Latin for wolf) Street near where he lived in London.

Equally interesting is the trip to Romania in the latter half where Michael Bayley Hughes goes in search of the real Transylvania and the historic Dracula. Here the documentary ends up being surprisingly more sympathetic to Vlad Tepes aka Vlad the Impaler than most historic accounts have ended up being (where he is usually placed on the same pedestal as Adolf Hitler and Saddam Hussein). The only major conclusions that this section of the film comes away with is that Bram Stoker never visited Transylvania and instead based his account of it on his Bradshaw’s Guide, and that he appropriated the name of Dracula after reading about Vlad Tepes in a work of history and that no further connection exists beyond that. None of which has stopped a huge Romanian tourist industry having popped up selling trinkets with the likeness of Vlad Tepes and castles acting as tourist destinations, claiming to be the authentic Castle Dracula (even when such is not the case).

These sections reveal some interesting facts – like how Dracula was banned under Romanian dictator Nicolae Ceausescu and remained unpublished in Romania until they started to receive an influx of Western tourists in the 1980s seeking out the real Transylvania whereupon Ceausescu ordered the book translated. The film crew visit a meeting of The Transylvanian Society of Dracula who are determined to redeem the view of the region from what it has become in the public imagination. The most amusing section is a visit to the Castle Dracula hotel that was built at the Borgo Pass (where Stoker describes it as being in the book) – where, in the absence of any real castle there, Ceausescu ordered a hotel built to serve as Castle Dracula for the tourists, which even has a statue of Stoker (who never even visited the area) now overlooking the region. It is a fascinating example of fiction having overwhelmed reality.