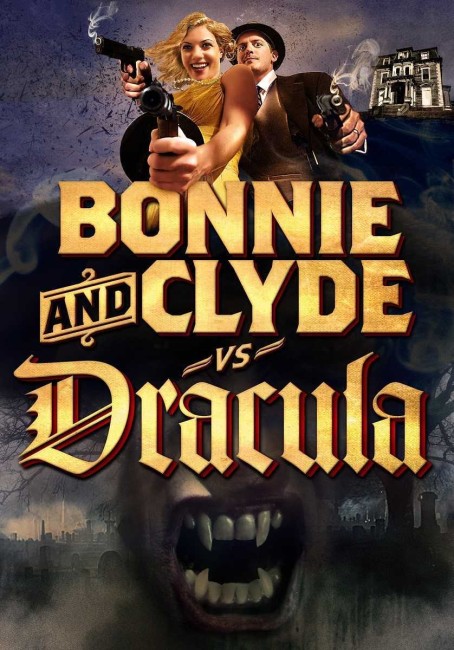 The 1930s. Bonnie and Clyde are wanted for a string of armed bank robberies. They meet up with their friend Henry who takes them to hole up at the bar run by Jake. Nearby, the scientist Dr Loveless suffers from crippling disfigurement and hides his face behind a hood. He keeps his sister Annabel a prisoner with an electrified collar around her neck and demands she administer a series of treatments to keep him alive. Loveless has come into possession of the remains of Dracula and brings him back to life. Henry proposes to Bonnie and Clyde a scheme involving robbing moonshiners. However, their first attempt goes wrong and they return with Jake badly wounded. After debate about what to do, Bonnie decides to go to Dr Loveless to get medical aid for Jake – only to walk into the clutches of Dracula.

Bonnie & Clyde Vs. Dracula was the second film for Timothy Friend who had previously made the horror film Cadaverella (2007). Friend has not made any films since but has spent the subsequent decade working as a writer and has published a couple of Western novels.

We have seen various novelty Dracula stories before. Dracula previously encountered Billy the Kid in Billy the Kid Versus Dracula (1966) and Giacomo Casanova in The Story of My Life (2013) and fought against the comic-book hero in The Batman vs Dracula (2005). And there have been assorted other fiction/history mashups on the screen – Sherlock Holmes solving the Jack the Ripper case in A Study in Terror (1965) and Murder By Decree (1979), the Western outlaw in Jesse James Meets Frankenstein’s Daughter (1965) and so on. (For more such examples see Real-Life People in Fiction).

Bonnie & Clyde Vs. Dracula has a good central idea – it’s a gimmick but one that makes you intrigued to watch to see what they do with it. The main issue with the film is a low-budget. Certainly, Timothy Friend and his crew make a fair stretch to get the vehicles, clothes of the era and so – there is nothing you can particularly point to that looks anachronistic. Some of the dialogue and attitudes maybe more so but nothing glaringly jumped out at me. On the other hand, the film is shot with modern video camerawork and seems too regularly lit to feel like it is taking place in a period setting as opposed to modern actors acting it out.

Tiffany Shepis has been a rising name as a Scream Queen since the early 2000s. Unlike some others who have held such a role, she is not a bad actress and has done some solid work. Unfortunately, outfitted with blonde hair as Bonnie Parker, she seems wrong for the role. The performance she gives is a broad one, almost verging on campy at times. I had difficulty believing her as the much more historically complex character of Bonnie Parker than the one we get on screen. The worst performance in the film is the one that comes from Jennifer Friend (the wife? sister? of Timothy). Far too much time is given over to such a petulant and silly character.

The disappointment of the film is its handling of a figure like Dracula (who would appear to be played by another member of the Friend family). Dracula spends almost the entire film recuperating and weak and only makes a brief appearance as the full, darkly magnetic vampire we all know at the end. Moreover, he receives an ignoble and hardly fitting despatch after Jennifer Friend accidentally brushes against the curtain and opens it whereupon he is promptly burned up. Compare this with the magnificent, not dissimilar confrontation between Van Helsing and Dracula at the end of Hammer’s Dracula/The Horror of Dracula (1958) to see just how much this falls short.