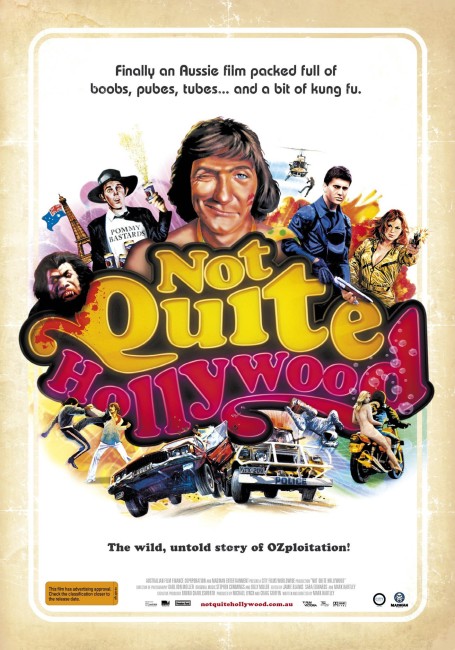 Not Quite Hollywood: The Wild, Untold Story of Ozploitation! was the first full-length film from Australian director Mark Hartley. Throughout most of the 2000s, Hartley had directed and edited a series of documentary shorts to accompany dvd releases of various Australian classics, many of which fall into the same area he explores here. Not Quite Hollywood proved a reasonable success in international festival release. Hartley subsequently went on to direct Machete Maidens Unleashed! (2010), a documentary about the Filipino exploitation genre of the 1970, and Electric Boogaloo: The Wild, Untold Story of Cannon Films (2014) about filmmakers Menahem Golan and Yoram Globus. He also ventured into non-documentary filmmaking as director of Patrick (2013), a remake of one of the films discussed here.

In Not Quite Hollywood, Mark Hartley charts the rise and fall of the Australian exploitation film that flourished between the mid-1970s and the mid-80s. I had never heard the genre called Ozploitation before this and it would appear that Hartley’s film has actually given use to the term and has caused it to become widespread elsewhere. Hartley and his various interviewees chart the rise of Australian cinema, which rarely existed as a genre before the 1970s. It took the success of international filmmakers who came to Australia – Hartley cites examples such as Nicolas Roeg with Walkabout (1970) and Ted Kotcheff with Wake in Fright (1971) – to give Australian filmmakers a sense that they could portray themselves on the screen. The rise of popular serious Australian films like The Picnic at Hanging Rock (1975) and My Brilliant Career (1979) was accompanied by another whole genre of Australian exploitation films.

Hartley spends the first section of the documentary dealing with the rise of the Australian sexploitation film. He and his various interviewees root this in the loosening of censorship standards and public mores that came about in the early seventies. There is discussion of an oddity called The Naked Bunyip (1970), a sex quasi-documentary where the censor ordered the cutting of many scenes, which the filmmakers instead showed as blanked out and represented by an animated bunyip on screen only for the bunyip to become a hit with audiences.

Things opened up with the success of the Barry McKenzie comedies, The Adventures of Barry McKenzie (1972) and Barry McKenzie Holds His Own (1974), which celebrate a sexism, homophobia (the film was even released with a mock ‘No Poofters Allowed’ certificate) and racism, not to mention multiple vomiting scenes, that kind of takes you aback. It is said that creator/star Barry Humphries was seeking to mock the Ocker (Australian redneck) society but the films ended up being celebrated by the very targets of his satire. Other films like Stork (1971), Alvin Purple (1973) and the tv series No 96 (1972-7), a soap opera featuring regular nudity, quickly followed. Some of the interviewees from this period, including Barry Humphries himself, are cheerfully unrepentant. As is said of Alvin Purple director Tim Burstall: “He was scum, a crab louse on the Australian film industry. On the other hand, some of us will always owe him everything.”

The sections that concern us the most are the middle ones dealing with the rise of the Australian horror and action films. Quentin Tarantino is one of the interviewees – he at one point confesses to being so excited by Australian car chase movie it makes him “ant to beat off” – and gets the most screen time of all those interviewed. Tarantino proves a surprisingly well-informed interviewee, championing the names of obscure directors like Brian Trenchard-Smith, screenwriter Everett de Roche, producer Anthony I. Ginnane and films like Long Weekend (1978), Patrick (1978), Roadgames (1981) and Dead-End Drive-In (1986), even obscurities like the killer crocodile film Dark Age (1987) and Fair Game (1988). The film also gives us tributes to forgotten figures like Terry Bourke, director of Night of Fear (1972), Inn of the Damned (1975) and Lady Stay Dead (1981).

It was seen during this time that producers Anthony I. Ginnane made a concerted effort to create a series of Australian-made genre films that emulated Hollywood models resulting in efforts such as Harlequin (1980), Race for the Yankee Zephyr (1981) and The Survivor (1981). Much reappreaction is given for Russell Mulcahy’s enormously underrated Razorback (1984) where various people debate whether it was a work of style over substance. Everyone gives praise for Richard Franklin’s Roadgames and the remarkable things it does.

The third section deals with the Australian action film. At length are recounted the hilarity of the antics of Dennis Hopper on the set of Mad Dog Morgan (1976) where he was drunk for substantial parts of filming and went so wild he even ended up being deported from the country – something that an interviewed Hopper clearly recalls and confirms. Or how everybody involved with The Man from Hong Kong (1975) agrees just how awful star Jimmy Wang Yu was – the claim is made that he held white women in such contempt that he ate flies before his love scenes with Rebecca Gilling. Much time is given over to Mad Max (1979) – although surprisingly nothing whatsoever to the massive hit of its enormously influential sequel Mad Max 2 (1981). An interviewed George Miller tells how he was influenced while working as a doctor in Sydney and there is discussion of its groundbreaking action scenes and shooting techniques.

One of the funniest sections is the account of the making of Turkey Shoot (1983), which nearly everybody speaks of with disdain. We learn that due to budget cuts, director Brian Trenchard-Smith tried to compensate by adding copious splatter and taking a camp approach. Steve Railsback claims that the producers spent an inordinate amount of time at the racetrack (quite whether they were spending the budget money or trying to recoup it is not made clear). There are even claims made that real bullets were being fired during action scenes, although this is denied by Trenchard-Smith.

What comes out is just how much of a Wild West this era of filmmaking was. Carla Hoogeveen talks about how on Night of Fear Terry Bourke told her the rats would be kept behind a glass cage and then when it came to shooting tried to say the glass wasn’t working or on the shoot for Lady Stay Dead he ignored the actresses’s request to be pulled out in the scene where her head was held down in a fishtank. There is reasonable detailing during the action scenes of the practices of the Australian stunt industry during this period, and stories of shoots that were done on open roads without any real concern for safety.