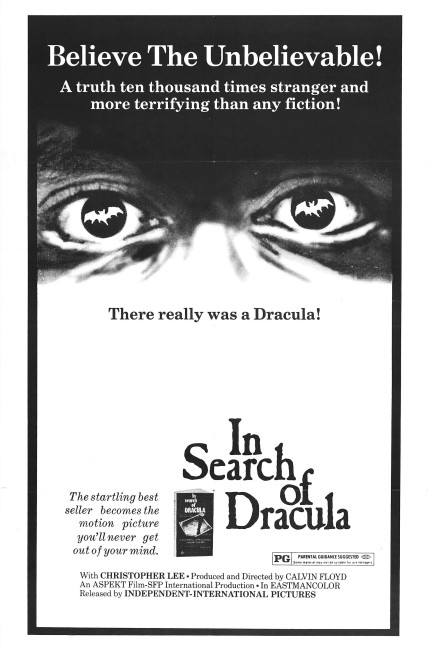 In Search of Dracula is a documentary based on the ground-breaking non-fiction book In Search of Dracula: The History of Dracula and Vampires (1972) by Radu Florescu and Raymond McNally. Florescu, a Romanian expatriate who fled the country at the outbreak of World War II, and the American-born McNally were professors at Boston College. The two combined to research the background of Bram Stoker’s Dracula (1897) and in particular Vlad the Impaler from whom Stoker took inspiration and the name Dracula. Knowledge of Vlad the Impaler as the inspiration for Dracula is widespread today but all of this can be traced back to McNally and Florescu. In their book, they examine Stoker’s inspirations, travel to Transylvania and visit the locations (finding they are not much like they are described in the book) and then dig into the history of Vlad the Impaler. The book was a best-seller and the two published several follow-ups with the likes of Dracula: A Biography of Vlad the Impaler (1974), The Essential Dracula (1980), a publication of Dracula with annotated notes and illustrations, Dracula, Prince of Many Faces: His Life and Times (1989), even Dracula Was a Woman: In Search of the Blood Countess of Transylvania (1983) in which they investigate the influence of the story of Countess Bathory on Stoker. Beyond that, they also wrote In Search of Frankenstein: Exploring the Myths Behind Mary Shelley’s Monster (1975) and In Search of Dr Jekyll and Mr Hyde (2000), while Florescu alone published In Search of the Pied Piper (2005).

In Search of Dracula is a documentary based on Florescu and McNally’s book. (In an oddly insulting way, given that they laid down all the material and proved generous interview subjects elsewhere throughout their lives, neither appear in the film), On the other hand, the film does boast the presence of Christopher Lee who not only narrates the film but plays Dracula in several scenes, as well appears as Vlad Tepes in the historical recreation scenes where we get the fascinating novelty of seeing Lee outfitted in costume to resemble the historical portraits of Vlad.

During the initial scenes, the film travels to Transylvania and attempts to match some of the locations up with the sections from the book as read by Lee. I think the subsequent documentary Dracula: The Vampire and the Voivode (2008) did a far better job of exploring this region and its relation to the vampire legend but you have to also remember that this was the first time that many audiences were seeing the real Transylvania up on screen and so these sections have an undeniable historical fascination. The most captivating sections are those where the documentary explores vampire mythology – something that is often quite different from the ways it has been depicted on the screen – and shows us a host of the superstitions and the way they have been treated through the years.

Thereafter the film heads off to explore Vlad Tepes and tell his story and legend, while exploring some of the areas where he lived. Again this is something that exposure through assorted History Channel documentaries has made over-familiar today but would have been fascinating back in 1975. From there, the documentary delves into a little of Bram Stoker’s life and then oddly enough diverts off to Switzerland to talk about the Villa Diodati and the writing of Frankenstein (1818). You think for a time that the film has gotten its Famous Monsters mixed up but this serves essentially as a pretext to introduce John Polidori and discuss the first fictional vampire Lord Ruthven in his story The Vampyre (1819).

This does lead to the least satisfying section of the film – the discussion of vampire fiction and media. The film’s discussion of literary vampire fiction is restricted solely to Polidori, J. Sheridan Le Fanu’s Camilla (1872) and Stoker and nothing beyond that. This is even more the case during the final sections where the film deals with Dracula on cinema screens. We get some discussion of Nosferatu (1922) and Vampyr (1932). No discussion of Dracula can be conducted without mention of Bela Lugosi but clearly the documentary was unable to obtain the rights to any footage from Dracula (1931) and so Lugosi is represented by footage from the non-horror silent film The Midnight Girl (1925). Even more surprisingly, especially given that Christopher Lee is narrator and appears in the film, there is no mention whatsoever of the considerable influence on vampire cinema by Hammer Films, although we do get a couple of clips of Lee taken from Dracula Has Risen from the Grave (1968) and Scars of Dracula (1971).

In Search of Dracula was the third film of Swedish director Calvin Floyd who went on to make two other works of horror with Victor Frankenstein (1977), an adaptation of Mary Shelley’s classic, and the Sheridan Le Fanu adaptation The Sleep of Death (1980).