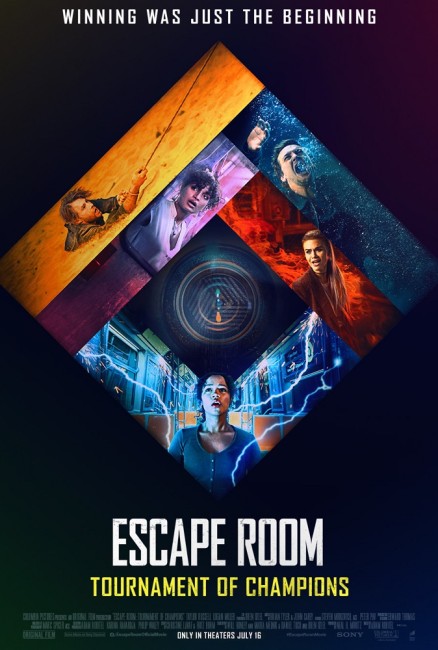 Ben Miller accompanies Zoey Davis as she sets out to prove the existence of the secretive organisation that trapped them in a series of deadly escape rooms. In New York City, someone snatches Zoey’s locket. They pursue the thief onto a subway car only for the carriage to become unhooked and turn into an electrified escape room. They discover that the four other passengers with them are all survivors of the escape rooms. As they now make their way through a series of escape rooms that are built as elaborate death traps, they realise that the controllers have placed them into a tournament of champions.

Escape Room (2019) was a modest hit, earning some $155 million worldwide from a budget of only $9 million. It was one of several films that came out within the space of a couple of years exploiting the phenomenon of the escape room that had spread around the world throughout the 2010s – where people are locked inside a room and have a limited time to solve a series of cryptic clues to get out. Tournament of Champions is a sequel.

As per any sequel, Escape Room: Tournament of Champions is more of the same but bigger and more elaborate. The unfortunate thing about the film is that the bigger and more elaborate parts are so ridiculously improbable in terms of how what the engineering of such sets-ups would require as to pass into the realm of complete fantasy. The opening room has the group aboard a New York subway train that is diverted and then turned into an electrified death trap. The amount of effort it would require to trap the six people in question in a carriage in the real-life New York subway (and make no sure there were no other passengers) and then divert it off the regular line and into a specially prepared trap that leads to a series of other escape rooms is absurd. So too is another room where the group enter onto a beach and then suddenly the water and waves transform into a cyclorama that looks as though it is taken from a postcard – a cool effect but impossible to pull off in a real-time setting. Not to mention the question of where all the astronomically high cost to set this up would come from.

There is something quite tedious about Escape Room: Tournament of Champions. All it consists of is a series of scenes where the characters go from one death-trap room to the next and run around trying to solve the clues before the clock counts down, frenetically spouting dialogue at 120rpm such that the connections being made are impossible to follow. At one point, one of the characters is killed and the other mourn that they didn’t even know his name. They promptly introduce themselves but in almost all cases that is all we get to know about them.

In a film where characters are no more than a name, it feels like you have zero investment in the stakes of anything that is happening except maybe “oh no they can’t kill the cute looking girl/guy.” Certainly, we do get an origin story for the escape rooms – one that contains a surprise grown-up performance from Isabelle Fuhrman who some might remember as the creepy child woman from Orphan (2009). The film though is an empty exercise whose sole purpose is to stage a series of improbably ridiculous traps.

For some reason, there appear to be two different cuts of the film. Deborah Ann Woll is credited and appears in scenes that are in the theatrical cut where she is still alive but in the streaming cut (seen here) she only appears in the scenes recapping the first film. On the other hand, the streaming version has scenes not seen in the theatrical version, including an opening scene where an uncredited Tanya van Graan is placed in a sauna trap that she must unlock using a magnet.

Adam Robitel was a former actor who became a director with the Found Footage possession film The Taking of Deborah Logan (2014). He wrote the screenplay for Paranormal Activity: The Ghost Dimension (2015) and then directed Insidious: The Last Key (2018), before making the first Escape Room.