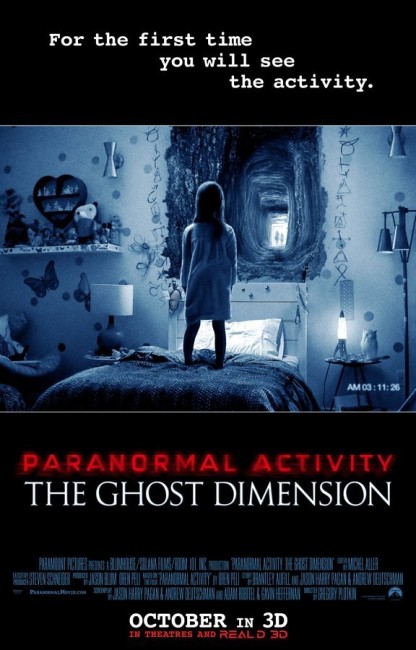 Palo Alto in 2013. Ryan and his wife Emily have his brother Mike come to stay with them for two weeks over Christmas following a break-up. While cleaning out junk, they discover an old videocamera. Ryan is a video whiz and is fascinated to find that the camera has unknown custom modifications. In switching it on, they discover that it is shows strange shapes and substances floating in the air. In playing some of the old videotapes found along with the camera, they find recordings of Katie and Kristi back from when they used to live in the house. As they view the tapes, they see the girls being urged to use their inner powers by cult members and are astounded when the girls seem able to look into the future and describe them there watching. At the same time, the camera reveals that the invisible playmate that Ryan’s young daughter Leila calls Toby is a paranormal entity. The Toby entity’s intents now become increasingly more malicious as it seems intent on claiming Leila as part of the diabolic purposes of the cult.

A few years ago, well before its use became as widespread as it is today, 3D was a gimmick that a flagging series would slap on the latest entry in a way to invigorate some novelty. See the likes of Friday the 13th Part III in 3D (1982), Amityville 3D (1983), Jaws 3D (1983), Freddy’s Dead: The Final Nightmare (1991) and Spy Kids 3-D: Game Over (2003), as well as efforts of the modern era such as The Final Destination (2009) and Saw 3D (2010). It is exactly the same in the case of Paranormal Activity: The Ghost Dimension where, for what is stated by the producers as the series’ final entry, it offers up the idea of what is perhaps the first (?) Found Footage film conducted in 3D. The justification for this is the introduction of a 3D videocamera that is capable of seeing the so-called ‘ghost dimension’. In latching onto such a gimmick though, the Paranormal Activity series cannot help but widely signal that it is out of fresh ideas.

The director’s chair has been inherited by Gregory Plotkin who has been editor on all of the sequels and producer on all but the first sequel. Plotkin gives us all the running around with handheld cameras, which looks rather giddy when seen in 3D. There is surprisingly little of the series trademark look of spooky happenings occurring under the baleful eye of closed circuit cameras set up obliquely recording – far less than in any of the other entries in the series.

What the 3D does offer is a few scenes of spectral dust floating around in the air and then of the Toby entity as it moves around the house – unfortunately, all you end up thinking as the black billowing mass floats about is how the film resembles the recent Mama (2013), while the opening of the ghostly portal reminds of the remake of Poltergeist (2015). Moreover, with these new scenes and their emphasis on entities pursuing people rather than security camera footage, it seems that all we have now is no more than a standard visual effects-driven ghost story.

Paranormal Activity: The Ghost Dimension‘s one original touch is a handful of scenes where Chris J. Murray and Dan Gill are viewing the collection of videotapes in the present and are watching scenes where the two young girls – the ones that will grow up to become Katie Featherston and Sprague Grayden – are being encouraged to look into the future where they are able to describe Ivy George’s bedroom. In a later scene, they describe the two men sitting there and at one point even offer up a “bless you” after Ivy sneezes. This holds an intriguing potential – a unique form of Found Footage-fuelled clairvoyance – that you wish the film had spent more time exploring.