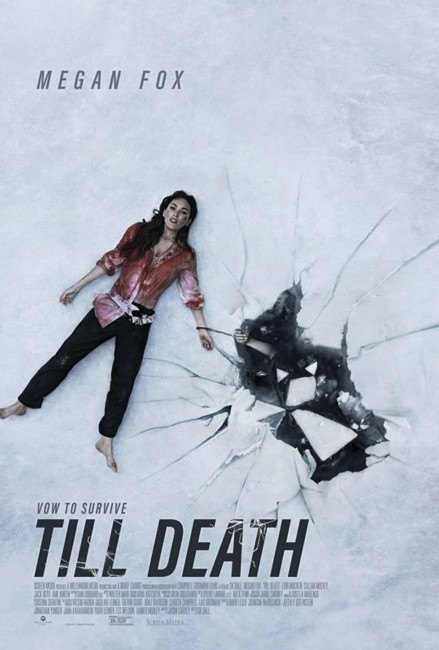 Emma Webster breaks things off with Tom, the man she has been having an affair with, and goes to celebrate her wedding anniversary with her husband Mark, a successful lawyer who is controlling of her. Mark makes every effort to make the event a romantic evening. After dinner, he blindfolds her and takes her for a drive to a surprise location, which turns out to be his lakeside cabin. When they wake in the morning, Emma discovers that Mark has handcuffed his wrist to hers. He then shoots himself in the head. Handcuffed to the corpse and forced to drag it everywhere, Emma tries to make an escape but Mark has removed every means of doing so. She then finds that Mark has called two criminals he defended to the house, one of whom attacked Emma and was sent to jail. They break into the house determined to get the contents of the safe. Believing that Emma is the only one who knows the combination, they pursue her while she tries to make an escape across the frozen-over lake outside while cuffed to the corpse.

Till Death must have been script that was snatched up by a production company the moment someone read the logline – “a wife is handcuffed to her husband’s corpse and must make an escape as she is pursued by hired killers”. It’s a premise that had me watching the film based solely on a single sentence synopsis.

In essence, the premise has been borrowed from the Stephen King novel Gerald’s Game (1992), filmed by Mike Flanagan as Gerald’s Game (2017). There is the same basic premise in both stories where a wife is handcuffed up by her husband while on a getaway to their remote cabin – he dies by heart-attack in King’s book, by suicide here – and she is left cuffed up facing the problem of how to get free. Till Death expands quite a bit on King’s basics – he had the heroine handcuffed to the bed for the duration of the story, whereas here she is able to drag the corpse around and moreover finds that he has removed every means of escape and then hired a duo of killers to come to the cabin.

Even if the premise is borrowed, it is still a heck of a hook for a script. It seems like a foolproof set-up – at least on paper. The script does a solid job winding up the twists with the arrival of the killers, Megan Fox hiding in the boatshed and the like. The script does cheat and get Megan Fox out of the handcuffs around the 50-minute mark. This feels like a letdown because the whole film is premised on her cuffed to a corpse – it shouldn’t be something easy to get out free from, her escape from confinement should be the climactic act of the film – and thereafter you lose interest. Moreover, the film never has you on the edge of the seat with the tension. I only think what mastery someone like an Alfred Hitchcock would have conducted with a script like this. By contrast, director S.K. Dale’s delivery ends up being disappointingly middle of the road.

There is also the Megan Fox factor. Fox gained attention a few years ago as a result of Transformers (2007). She appeared in a couple of other films – Jennifer’s Body (2009) and Teenage Mutant Ninja Turtles (2014) – and was subject to a good deal of celebrity buzz where she gained a reputation as a bitchy diva and was then forgotten five minutes later. In recent years, as A-list offers no doubt dry up, she seems to turning to these medium-budget films as a way to pay the bills, having also appeared in the invisible girl film Above the Shadows (2019), the killer lion film Rogue (2020) and the vampire film Night Teeth (2021). She is adequate in the part but her perpetual coldness fails to engender the sympathy for the protagonist that the film hangs on.

Till Death was a directorial debut for S.K. Dale who had previously made a series of shorts. It comes from Millennium Films, the company of former Cannon Films associate Avi Lerner. Millennium have a habit of buying up the rights to previously successful properties and spinning off further, almost always more cheaply made and inferior sequels, remakes or reboots with the likes of Conan the Barbarian (2011), Hellboy (2019) and the various Texas Chainsaw and Rambo sequels, among others.