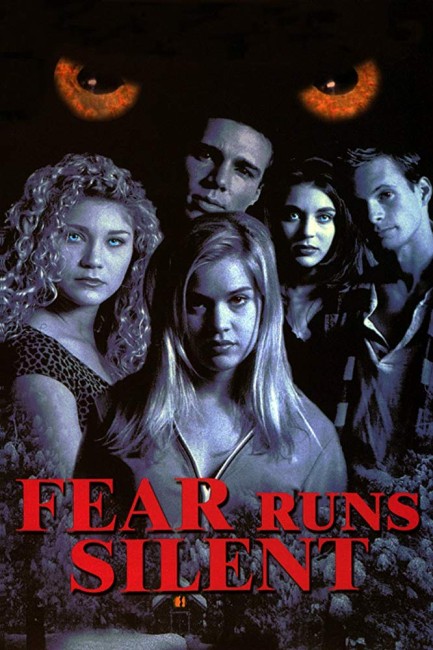 The emotionally troubled Kerry goes to a psychologist to talk about her fears. He hypnotises her and later places her in a padded cell. Throughout this, he manages to draw out Kerry’s painful memories of an incident that happened when she and a group of seven school friends joined a teacher on a field trip into the Red Lake Mountains. Almost immediately after they arrived, someone or something in the woods attacked and killed the teacher and dragged Kerry and her friend Jennie away. The others huddled in fear in a cabin as the creatures slaughtered their numbers. As the therapist pushes Kerry to remember what happened, she begins to think that the creatures have some connection to the stepfather that abused her.

Fear Runs Silent comes from Serge Rodnunsky, a former dancer/choreographer who broke into the film industry as a director with A Play for Saulie (1990). In the decade since then, Rodnunsky has become an amazingly prolific director, making various sexual relationships films, action films and thrillers. Throughout the 1990s alone, Rodnunsky has made some twenty+ films, averaging two a year. A sample of these include such generic titles as Life After Sex (1992), Blood Justice (1995), Rage of Vengeance (1995), Malibu Nights (1997) and Tripfall (2000). All of Rodnunsky’s films are independently financed, although the majority of these are poorly regarded and not widely seen beyond the wee hours of cable filler. Rodnunsky has ventured into genre material upon a handful of occasions with the sf film Final Equinox (1995), the children’s film Tiger (1997), the Edgar Allan Poe adaptation Black Cat (2004) and the horror films Chill (2007) and The Portal (2010).

Fear Runs Silent starts out intriguingly. There is a very interesting opening with scenes of a yellow-eyed monster briefly glimpsed prowling through the woods, all intercut with Suzanne Davis telling her therapist Dan Lauria about this and the suggestion that an American Indian glimpsed in a bar may have some mystical relationship to what is going on. The scene ends with an accident on a snowy highway that comes with a brutal punch as we see a trucker severed at the waist and the woman from a crashed car being dragged away by the creature and strung up to a tree.

The film then segues into the main story proper. At face value, this seems to be a standard slasher film set-up with a group of teenagers tramping into the woods where a sinister fate awaits them. However, Rodnunsky keeps filtering this through some unusual narrative devices – the girl telling the story to her therapist, suggestions of Indian mysticism and flashbacks to the narrating heroine’s childhood and memories of molestation from her stepfather that are somehow connected to the creatures in the woods. Indeed, we are not even entirely sure what type of film we are seeing – Rodnunsky keeps what is prowling in the woods ambiguous and little seen and we can only guess as to whether we are in Deliverance (1972)/Friday the 13th (1980)-type territory with deranged hillbillies or maniacs prowling the backwoods or whether the menace is something non-human.

Alas, after setting up a intriguing situation, Rodnunsky fails to let any of it pay off. There is never any point that the film moves from the kids at siege to their deciding to stand up and fight back, or even for that matter their getting to discover what is attacking them. Certainly, the scenes with kids being attacked as they take siege in the hut are directed credibly amid fast, busy cutting. After a time, the characters running around and the frenetically busy camerawork and most of all the partial glimpses and lack of explanations about what is attacking them starts to become tiresome.

Moreover, the framework story collapses into a mishmash of pretensions and amateurish symbolism. Rodnunsky makes all sorts of connections between the creatures in the woods, the molesting stepfather and the men that Suzanne Davis appears to be afraid of, but succeeds in making sense of none of it. He then pulls back to do a The Cabinet of Dr Caligari (1919) and show that all of it may just have been a paranoid delusion of the heroine who is in a rubber room at a psychiatric hospital, before borrowing a Dead of Night (1945)-styled slingshot ending and going out with the suggestion that the whole thing is about to repeat all over again, or that it was all some kind of premonition of events to come. The original films mentioned did these twists with cleverness and originality but by the time that Rodnunsky latches onto them the effect seems hackneyed and pretentious – effects that have no meaning or depth beyond being there to provide meaningless twists.

Stacy Keach and Billy Dee Williams turn up to offer marquee-name value and are both killed off within about five minutes; Dan Lauria stays around a little while longer as the therapist. The rest of the youth cast have failed to do anything else, with the exception of Cerina Vincent who has gone onto attain a modest reputation as a horror heroine in the 00s.