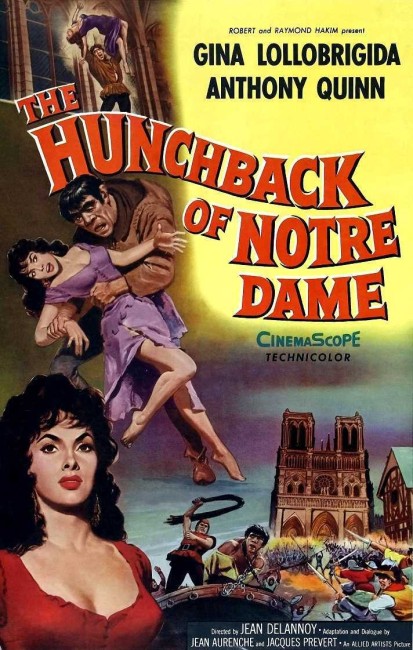 Paris in the year 1482. Claude Frollo, an alchemist and bishop at Notre Dame cathedral, feels desire for the beautiful Gypsy girl Esmeralda who dances in the square below. He orders the cathedral’s imbecilic bell ringer, the hunchback Quasimodo, to bring her to him but Quasimodo’s attempted abduction is thwarted by the handsome guard captain Phoebus. For this, Quasimodo is arrested and flogged in the square but Esmeralda intervenes to treat him with kindness. When the jealous Frollo sees Esmeralda in the arms of Phoebus, he stabs him. Esmeralda is arrested, accused of being a witch. With Frollo as part of the judging tribunal, she is sentenced to be executed. However, Quasimodo intervenes to snatch her away to sanctuary in the cathedral. Below, Frollo seeks to have sanctuary lifted so as to storm the cathedral with the soldiery, while the unruly peasantry raise a mob determined to break in.

This is a version of the story that been mounted with a great deal of focus on the production design and costuming. The colour shouts out from the screen with a lavishness that seems determined to make up in its richness for everything that the two previous black-and-white shot versions lacked. The film opens with much emphasis on the bawdy peasant pageantry – something that was downplayed in the previous films.

The film has done a very impressive job in recreating the streets of Paris in much colour and detail – these are not mere sets that end where the camera’s eye does but one where the camera follows the large number of extras as they move through the streets. The soldiers look resplendent in their uniforms. The housing of the cathedral’s belltower is a set that has been built on multiple levels. Particularly spectacular is the storming of the cathedral by the rabble army during the climactic section.

As Quasimodo, Anthony Quinn is crucially lacking in much of the pity and suffering that either Lon Chaney or Charles Laughton managed to invoke in the previous airings of the role. Quinn does okay but the part here never seems too much more than a simpleton without many gradations of character than that. Moreover, his actual hunchback seems to be downplayed – Quinn walks upright, compared to Chaney and Laughton who were burdened by makeup appliances that left them almost bowed over to the waist. Gina Lollobrigida fares much better – unlike the previous versions that were cast with standard Hollywood starlets, she enlivens Esmeralda with a fiery passion and earthy sensuality.

If this version is overlooked due to lacking the strength of the title performance of the earlier versions, one thing that must be said in its favour is that it is an extremely faithful to the original Victor Hugo novel. It brings out many aspects that have been tossed out in other versions – the visit to the Kingdom of the Thieves and Beggars, more time given over to minor characters like Gringoire and Clopin.

Most notable is the full treatment of Phoebus, which other adaptations (most notably the Disney version) have pumped up into a romantic hero, whereas this is accurate to the original writing of the character as a cad who maintained a society fiancee while on the other hand dallied with the attentions of Esmeralda. The faithfulness of this version continues right down to the opening voiceover introduction where the narrator tells us about the Greek word ‘Anaykh’ carved into the walls of the cathedral, which Victor Hugo originally wrote about in his preface to the book.