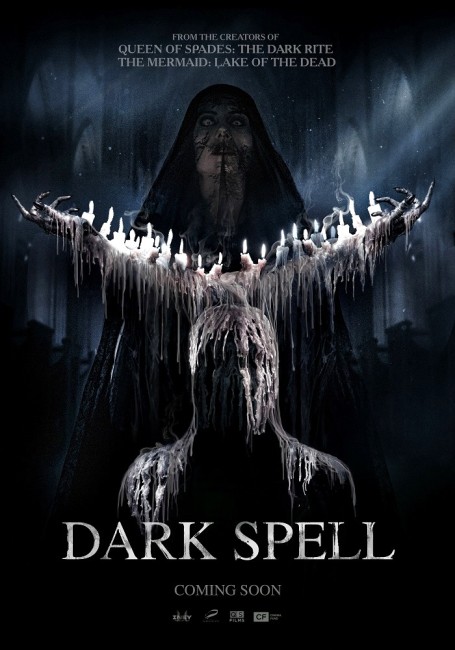 Zhenya is distraught to find her boyfriend Kir, an artist who is the father of their infant child Polina, having sex with one of his models. He pushes Zhenya away. Someone tells the distraught Zhenya that the only way she will get him back is with a love spell. Zhenya goes to a Gypsy woman Aza who tells her to conduct a ceremony during the wedding of someone she knows. Zhenya chooses the wedding of Sonia, who was a client in her job as a dressmaker, and Viktor. There she conducts her ritual, only to collapses on the steps outside the church and have to be rushed to the hospital where Viktor is a doctor. Afterwards, Viktor finds Sonia making out with another man and leaves her in disgust even as she protests she didn’t know what came over her. Kir then returns to Zhenya but as they renew their relationship, she finds that he has become utterly obsessive and jealous.

Russian genre cinema has been doing some extraordinary things in the late 2010s/2020s. Dark Spell joins a number of other Russian films of this period that venture into horror and dark fantasy stirring a pot of mythology, folklore and history. I have been watching some fine efforts in the last little while with the likes of The Blackout (2019), The Ninth (2019), Sputnik (2020), The Superdeep (2020), The Widow (2020) and The Ice Demon (2021) and that only seems to have scratched the surface, (See Russian Cinema).

Dark Spell comes from director Svyatoslav Podgaevsky who has been prominent in this Russian fantastic revival, having made hits like Queen of Spades (2016), The Bride (2017), The Mermaid: Lake of the Dead (2018) and Baba Yaga, Terror of the Dark Forest (2020), along with other works such as Block 18 (2014) and the tv series Kitchenblock (2021).

When you think of films about love spells, you automatically assume some kind of light fantasy like When in Rome (2010) – see Films About Magic Spells. By contrast, Dark Spell heads into pleasingly dark places. Yana Enzhaeva conducts the ceremony hidden on the balcony of a church as the service takes place below, where she uses candles, pieces of cloth and eats raw meat. This seems to be heading into a dark and forbidden place – where you just know that something horrible is going to happen. Indeed, the entire film seems to be construed as an object lesson in someone not wanting what they ask for. Predictably after this point, boyfriend Konstantin Beloshapka returns to Yana Enzhaeva and becomes fanatically obsessed with her to the point he is punching out her friends, pursuing her in a vehicle chase and at one point even trying to encase her body in plaster.

Some of Svyatoslav Podgaevsky’s directorial effects are predicated on dream jumps – an annoyingly overused device in horror cinema for the sole purpose of getting a jump out of an audience – although here Podgaevsky deploys them with some reasonable effect. And there are some other nasty effects like where Konstantin Beloshapka abruptly cuts off his own mother’s finger at a dinner table to get a family ring in order to propose to Yana. There is also a particularly nasty scene where Yana becomes trapped inside a mortuary cabinet with Konstantin’s dead body. Everything culminates in a ceremony held in the church to reverse the spell, which seems to push into just as many dark places as the first scene did.