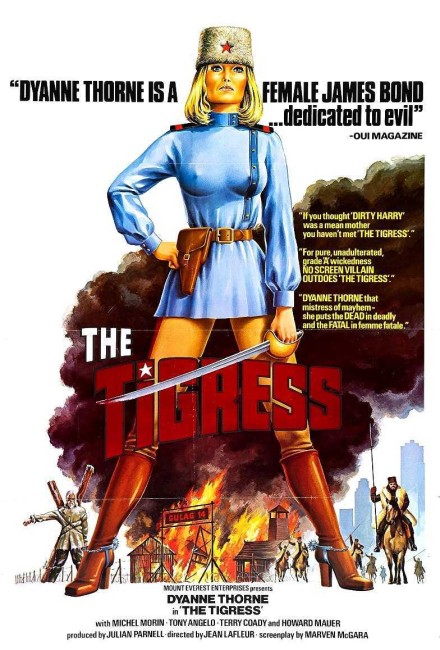 In 1953, Ilsa is the commandant is Gulag 14 in Siberia. She tortures and kills the Soviet political prisoners sent there, while her guards compete amongst themselves for her sexual favours. Ilsa’s reign comes to an end when the prisoners rebel upon news of the death of Josef Stalin. Montreal, 1977. Andrei Chikorin, a former prisoner at Gulag 14, accompanies a Russian sports team to Canada as their coach. The players ask for a night off to enjoy some women and Chikorin accompanies them to a brothel. However, the brothel is managed by Ilsa who is in the process of forcibly taking over the crime operations of local Mafia bosses. She orders Chikorin abducted and determines to finish breaking him.

Ilsa, The Tigress of Sibera was the third of the notorious Ilsa films. The series began with Ilsa, She Wolf of the SS (1974), which starred Dyanne Thorne as the commandant of a Nazi concentration camp who enjoyed torturing and sexually using her prisoners. The film ventured into an extraordinary arena of bad taste in serving up concentration camp atrocities as exploitation movie grist. That did not stop the series being dragged out for two-and-a-half sequels all of which dropped all reference to the Nazis. These began with Ilsa, Harem Keeper of the Oil Sheiks (1976) and was followed by Ilsa, The Tigress of Siberia, all featuring Dyanne Thorne. The half sequel was the German-shot Greta the Mad Butcher/Wanda the Wicked Warden (1977), which featured Dyanne Thorne doing her usual thing running a mental hospital but playing a character named Greta. This was released in English territories as Ilsa, The Wicked and Ilsa: Absolute Power making it an unofficial sequel in the series.

Following the chronology of the Ilsa films makes your head hurt. In the first film, we are introduced to her as a Nazi commandant during World War II. The second film has her apparently unaged running the harem of the sheik of an oil kingdom in the 1970s, while The Tigress of Siberia backtracks to show she also ran a Soviet gulag in the 1950s, went to the Middle East for Harem Keeper and then left there to take over Mafia operations in Montreal in the late 1970s, all despite the fact she is either killed or imprisoned in the previous films.

The first half of Ilsa, The Tigress of Sibera is essentially a rerun of Ilsa, She Wolf of the SS but with Dyanne Thorne running a Soviet gulag instead of a Nazi concentration camp. There’s the same set-up offering up a parade of tortures of prisoners interspersed with scenes of Dyanne Thorne engaged in sex with various of her guards. Like the first two films, this essentially becomes a catalogue of torture scenes. A prisoner is locked in a cage with Ilsa’s tiger and torn apart. The ringleader of a group of troublemakers is strung up upside down and dunked into a hole cut in the ice until he drowns. There’s an arm wrestling scene held over two buzzing chainsaws where the loser’s wrist is severed.

Lording over all of this is Dyanne Thorne who gives another haughty performance and owns the show. In one scene, she is nude riding around on one of her lieutenants, whipping at him with a riding crop and then in bed with him still wearing her leather boots and spurs. She even holds court over her Montreal crime gang by having her lieutenants sit around watching while she takes a shower.

The Montreal scenes that take up the latter half feel like they have strayed in from a different film. Like She Wolf of the SS, this was a Canadian production. One suspects that it was cheaply shot using Montreal in winter to represent the gulag scenes and then the running time was padded by shooting scenes around the city. The Montreal scenes feature an entirely different plot with Ilsa muscling the local Mafia out of business and then connect up to the first section to become a revenge story as she is found by a former prisoner. Here the torture scenes are forgotten about apart from the odd scene – a Mafia don placed in a barrel and dumped into a hole cut in a frozen-over lake; another Mafioso left in the snow on the side of the road as a snowplough comes by and splatters him.

One of the oddities of the Montreal scenes is that Ilsa seems to have devised a prototypic version of Virtual Reality (before anybody ever coined the term). Subjects are placed in a room that has the ability to find their deepest fears and then somehow play back a lifelike projection of them.

Ilsa, The Tigress of Sibera was the second of only two films directed by Jean Lafleur, the other being The Mystery of the Million Dollar Hockey Puck (1975). Lafleuer worked as an editor, including cutting Death Weekend (1976) and David Cronenberg’s Rabid (1977). He also wrote the screenplays for Spacehunter: Adventures in the Forbidden Zone (1983) and an adaptation of The Lost World (1998). Producer Julian Parall is supposedly a pseudonym for Ivan Reitman, later the director of popular comedies like Meatballs (1979), Stripes (1981) and Ghostbusters (1984).