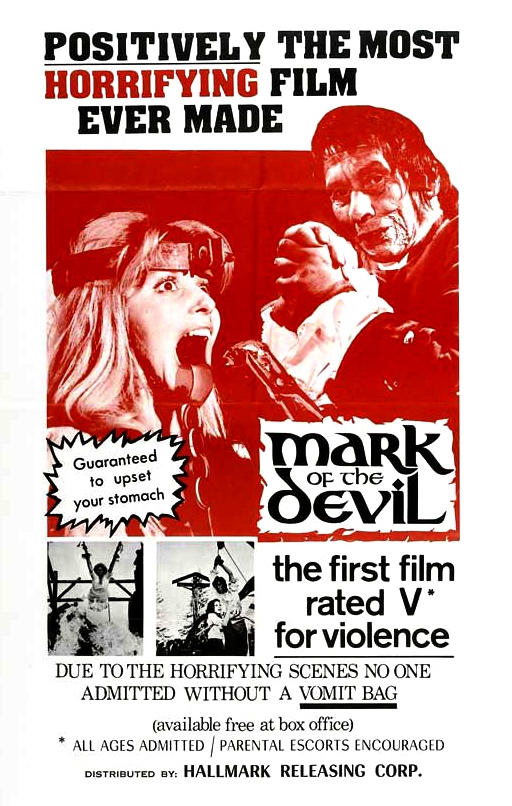 The Middle Ages when the witchcraft persecutions and burnings were rampant. Count Christian von Meruh travels to a town to announce the pending arrival of his patron, the feared witch hunter Lord Cumberland. The local witchfinder is the ignorant and repulsive Albino who resents Cumberland’s imminent intrusion. Albino desires the barmaid Vanessa Benedikt and tries to force himself on her. When she slices his cheek in trying to fend him off, he turns and accuses her of witchcraft. Instead of imprisoning her, Christian grants Vanessa shelter where the two are attracted. However, when Lord Cumberland arrives, Albino seeks to have Vanessa tried on trumped-up charges, despite Christian’s protestations of her innocence. Through Lord Cumberland’s torture and persecution of others, Christian begins to see that Cumberland is not the upholder of faith he believed in but a rapist and murderer.

Michael Reeves’ Matthew Hopkins – Witchfinder General (1968) became one of the recognised classics of the Anglo-horror cycle of the 1950s-70s. In it, Reeves broke with the supernatural monsters and psychological thrillers being made in Anglo-horror at the time and conducted a harshly realistic depiction of the true-life witch persecutions of 17th Century England. Witchfinder General enjoyed some success. Its greatest influence was in inspiring a series of films over the next few years that took great relish in showing the tortures visited on witches during this period with the likes of Jess Franco’s The Bloody Judge/Night of the Blood Monster (1970) and The Demons (1972), Blood on Satan’s Claw (1971), Inquisition (1976) and most famously Ken Russell’s The Devils (1971).

The West German-made Mark of the Devil was one of the most notorious of these historical witch persecution films. In some places it was banned, in others substantially cut (it was not available in full uncut form in the UK until the 1990s, for instance). The US version contrarily leapt aboard this with a promotional campaign that promised the film would make audiences throw up and handed out vomit bags at screenings.

Most critical commentary on Mark of the Devil is dismissive of it as simply being a catalogue of gratuitous torture scenes, although I would argue that it has more merit than that. Certainly, a catalogue of torture scenes is what the film seems determined to give us. The opening scenes provide several of these – nuns being raped; a man stripped naked and then tarred and feathered and made to run through the streets; a witch being winched down into a fire. Elsewhere, we get scenes with Gaby Fuchs being stretched on a rack, branded and thumbscrews applied; the nasty Blood Feast (1963)-like effect of tearing out someone’s tongue; Michael Maien made to sit on a chair of nails, his feet beaten and he then placed on a chair where a fire is lit under his exposed buttocks. This was Torture Porn way back before anyone ever coined the term.

The film seems confused in regard to its sense of historical place. It was shot in various locations in Austria. It is never specified as taking place in any country throughout – most of the characters have Germanic names with von prefixes, although Herbert Lom’s character contrarily has the very English name of Baron Cumberland. The opening credits also make the highly exaggerated claim that there were some eight million people burned at the stake in Europe. This and even higher figures that have been quoted in terms of witch burnings is something that modern historians have poured ridicule on. A look at the basic figures can easily dismiss this claim – considering that Europe only had a population of around 60 million during this period, a figure of 8-11 million witch burnings would seem to indicate something like one-sixth of the entire population would have been burned at the stake. Historians have looked over the surviving records and, though these are incomplete, estimate the more accurate figure to be around 100,000.

Unlike Witchfinder General and The Devils, Mark of the Devil has a much more sordid view of the people enacting the persecutions. Where these other films saw the motives as being ignorance, mass hysteria, mob cruelty or political machinations, Mark of the Devil sees that these acts were motivated by drunken rapists, cowards accusing those who had sexually rejected them, fears of impotence, soldiery excusing an opportunity to wantonly rape and murder, or of false accusations made as an excuse to confiscate land and titles – issues that Witchfinder and The Devils only peripherally touched upon.

Mark of the Devil certainly comes with a great cast. There was Reggie Nalder, probably best known subsequently as the vampire in Salem’s Lot (1979), whose pock-marked features have a deliberately loathsome rat-like appearance that seem perfect for such a craven, cowardly role. The surprise is a 26 year-old Udo Kier, who manages to look piercingly handsome as the hero of the show. This was one of Udo Kier’s first film appearances and comes at oppose to the culty, offbeat roles that he would become known for throughout the rest of his career. The film also benefits from an unusual and melodic score.

The sequel was Mark of the Devil Part II (1972), written by this film’s director Michael Armstrong, directed by producer Adrian Hoven and featuring a return appearance from Reggie Nalder but in a different role.

English director Michael Armstrong had previously made The Haunted House of Horror (1969) but only ever directed one film subsequent to Mark of the Devil with the horror anthology Screamtime (1983). He did write a number of other films, including several 1970s British sex comedies, the most famous of these being The Ballad of Eskimo Nell (1975). He occasionally returned to write genre material, delivering the screenplays for House of the Long Shadows (1983) and Psychosis (2010).