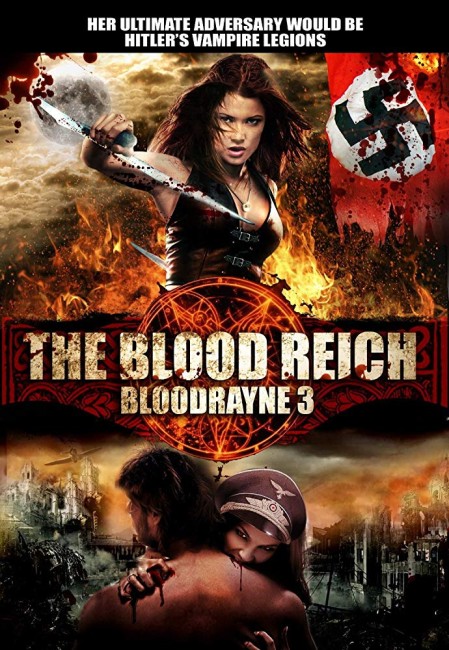 It is the midst of World War II. The dhampir Rayne maintains a singlehanded war against the Nazis. After liberating a trainload of people being sent to the concentration camps, she falls in with a group of freedom fighters. What she is not aware is that blood from a cut she sustained during the fight has mingled with that of the SS Commandant Brand and has transformed him into a part-vampire too. As Brand comes into a growing awareness of his powers, he sets out to track her down. His associate Dr Mangler hatches a plot to use the captured Rayne’s blood to create an army of Nazi vampires and make the Fuhrer himself invincible.

Bloodrayne: The Third Reich was the third and final of Uwe Boll’s Bloodrayne films. Boll began the series with the universally ridiculed Bloodrayne (2005), which featured Kristanna Loken fighting vampires in a mediaeval setting. This continued with Bloodrayne: Deliverance (2007), which had a Western setting and where Natassia Malthe took up the title role. The latter also featured both Michael Paré and Brendan Fletcher in supporting roles (although different to the ones that they play here).

At the same time as he made Bloodrayne: The Third Reich, Uwe Boll also made Blubberella (2011), which is almost a scene-for-scene alternate version of the film, is shot on the same sets and features the same supporting cast but where Rayne is recast with plus-size actress Lindsay Hollister amid a great many bad taste fat jokes.

The film series is developed out from the videogame Bloodrayne (2002) in which the player character is Rayne as she hunts vampires and Nazis in various locations in the year 1933. Clearly, Uwe Boll has construed the films as a prequel and it is only with The Third Reich that the series arrives in the same era where the game takes place (although there are a number of differences between the two).

Uwe Boll has a reputation as the world’s worst director (not necessarily a designation this author agrees with). He has attracted a good deal of ire with his various videogame adaptations – House of the Dead (2003), Alone in the Dark (2005), Bloodrayne, In the Name of the King: A Dungeon Siege Tale (2007), Postal (2007) and Far Cry (2008) – for a variety of reasons that include his indifference to game canon, bad casting choices and often ridiculous action sequences.

Into the 2010s and up until his retirement in 2016, Boll moved on to original material (largely because his reputation grew such that videogame companies refused to sell him the rights any more) and into what increasingly seem to be angry diatribes against the modern world. (A list of Boll’s other genre films is at the bottom of the page).

Bloodrayne: The Third Reich actually emerges as one of Uwe Boll’s better films and is certainly the best of the Bloodrayne series. The action scenes are slickly choreographed. Boll even gives us a steamy girl-on-girl love scene at one point. The opening scenes with evocative images of people being herded off to the death camps could easily sit in a far better budgeted film. (It is hard to believe that Boll could go from here where he shows a sensitivity to the material to Blubberella wherein he turns The Holocaust into a bad taste joke).

One of the film’s bonuses is its cast. Natassia Malthe is not much of a presence – she inhabits the action scenes but plays with almost no distinction in any other respect. Far better are Boll regular Michael Paré and Clint Howard, Ron’s younger brother. Both of them appear to have accepted that B movies like this are their lot in life and play to the gallery with immensely entertaining regard, especially Clint as the demented doctor.