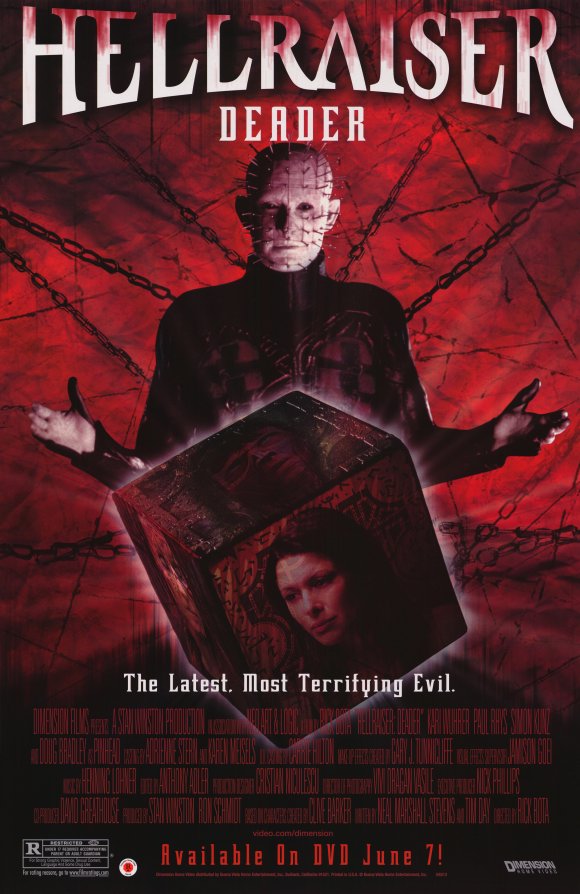 Amy Klein is a journalist for London Underground magazine and has a reputation for breaking the rules and going out on a limb for an article. She is shown a videotape by her editor that appears to depict members of a cult known as Deaders killing a woman and then resurrecting her. Amy is sent to Bucharest to investigate. Entering the apartment of Marla, the sender of the tape, Amy finds her dead. She takes a Lament Cube that she finds in Marla’s hand. Activating it plunges her into a world where she can no longer be sure what is reality and what is illusion. There she becomes caught between Pinhead who wants to claim her soul because she opened the box and the Deader leader Winter who sees Amy as a vital key in the arcane game he is playing with the Cenobites.

Hellraiser: Deader was the seventh in the series of films that began with Clive Barker’s Hellraiser (1987). Barker oversaw various other writers and directors as they created the three successive entries – Hellbound: Hellraiser II (1988), Hellraiser III: Hell on Earth (1992) and Hellraiser: Bloodline (1996). After the low returns of Bloodline, Trans Atlantic Entertainment sold the rights to Dimension Films, who gave the duties of making the films to Neo Art & Logic, a company that specialise in making low-budget sequels to other people’s franchises. They made the unexpectedly decent Hellraiser: Inferno (2000) from a then unknown Scott Derrickson, followed by three other sequels, all under the directorial hand of cinematographer Rick Bota, with Hellraiser: Hellseeker (2002), Hellraiser: Deader here and the subsequent Hellraiser: Hellworld (2005), which was shot back-to-back with Deader. A few years later, Dimension also made Hellraiser: Revelations (2011) and Hellraiser: Judgment (2018), both in order to secure the hold on rights. This was followed by the remake Hellraiser (2022).

While Hellraiser fans are generally favourable to certainly the first three entries, they regard the series as having gone well downhill by the time it arrived in Dimension and Neo Art & Logic’s hands and certainly by the point Rick Bota came on board. Hellraiser: Deader apparently started off not even as a Hellraiser script but an original work that was brought up and then rewritten to become a Hellraiser film. This may well explain why Pinhead feels almost superfluous to the plot. The film’s problems however start with a premise that fails to do anything to make the concept of a fetish where people willingly allow themselves to be killed and are then somehow resurrected work with a basic plausibility.

Lacking the apparent means to make this premise credible, all that Rick Bota does is turn the film into a pretentious labyrinth of reality and illusion. Bota does a passable job in generating atmosphere. It’s just that the film aches with his efforts to keep pumping it up – a contrived scene where Kari Wuhrer has to reach around a corpse sitting on a toilet to pick up a parcel is dragged out for far more than it is worth. Even a scene where a kid draws Kari Wuhrer’s picture is blown up to the overly momentous. There is also the improbable novelty of a fetish nightclub that takes place in a perpetually blacked-out subway car (doesn’t the Bucharest subway system ever have cctv cameras and if they do, why don’t they send transit police to disperse the fetishists, one keeps wondering?) but this is only a tediously predictable and cliched depiction of a world of vice and fetish.

For that matter, nothing ever seems to happen during the first half of the film, which only consists of Rick Bota throwing in weird and surreal things – Kari Wuhrer climbing around the corpse in the bathroom; she thinking she sees a man jumping in front of a subway train but there being nothing there when she calls the authorities; she entering a building and becoming trapped between two walls that narrow together as someone starts trying to stab her (a scene that seems like something out of a Dario Argento film); a vision where she is grabbed by chains from the Lament box; the fetish subway car that on a later visit turns out to be filled with corpses. In all of this, Rick Bota is like someone directing a bad A Nightmare on Elm Street copy where the line between reality and dream/illusion is blurred so constantly that one ceases to care what is what.

Kari Wuhrer, a reasonable actress who had made a career in low-budget films, gives a serviceable performance. The silliest performance comes from Marc Warren, a rising British actor, who postures campily as the leader of the fetish subway car nightclub.