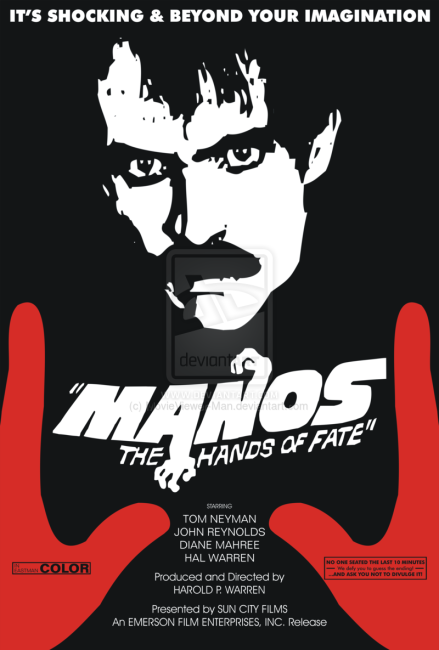 Mike, his wife Margaret and their young daughter Debbie become lost while heading away on vacation near El Paso. They come to a remote house in the desert. The creepy hunchbacked retainer Torgo reluctantly allows them to stay the night. Strange things then begin to happen. The Master that Torgo serves rises from the dead with the intention of turning Margaret into one of his harem of wives.

Manos: The Hands of Fate is a film that has emerged in recent years as a new contender for The Worst Film Ever Made. This is largely due to its becoming the consistent No. 1 in the Bottom 100 Movies of All Time at the Internet Movie Database, surpassing other morr well-known contenders like Plan 9 from Outer Space (1959). This surprise distinction afforded this otherwise entirely forgotten film a new fame and it has been duly revived.

The problem with films (or indeed anything) that gets slapped with labels like the Best/Worst Ever is that such a distinction builds an expectation. One went into Manos: The Hands of Fate, screening at the 2002 Beck’s Incredible Film Festival in Wellington, New Zealand, expecting a stinker of legendary proportions, something filled with bizarreness and hysterical technical gaffes on the order of an Edward D. Wood Jr.

The truth that becomes apparent though is that Manos: The Hands of Fate, while almost certainly an extremely poorly made film, is not particularly bad, at least not bad bad in the way that made Plan 9 into a cult masterpiece because of its technical ineptitude and hilarious purple dialogue. Certainly, one has covered films here that are far more technically inept, mind-bendingly stupid or filled with unintentional dialogue howlers than anything in Manos. Manos‘s unfortunate distinction is that it is never bad enough in that extreme way to warrant such celebration.

Most of the time Manos is just dull and boring. There is very little story to it (although in its favour there is at least a passable twist ending). Despite the title, you are not sure what the ‘hands of fate’ refers to. Its greatest crime as a bad film may not be that it is technically inept so much as that it is simply boring. It is very slowly directed and not much happens throughout. Director Harold P. Warren, who also plays the beleaguered husband, is a director with no concept of dramatically breaking his shots up. The slim (74-minute) running time is padded out with endless cutaways to scenes of two teenagers making out in a car in the desert, a subplot that ultimately proves to have no impact on the main body of the story. Everything is run over by an infuriatingly bland muzak score.

There are times it almost seems like Warren is wanting to open up as a Russ Meyer horror film – the plot set-up is vaguely similar to Faster, Pussycat! Kill! Kill! (1965) and Warren seems to have a great deal of interest in shooting the Master’s wives having slow-motion catfights in their diaphanous gowns.

There are certainly much in the way of bad acting – what is of compulsive fascination to everyone who watches the film is the presence of John Reynolds as the hunchbacked manservant Torgo. Reynolds goes through the entire film with a bizarrely unconvincing limp and a series of facial expressions that make you wonder if he, or even if you, are not consuming drugs. On the plus side, the tall, bony Tom Neyman has a modestly effective and unnaturally spookily intense presence as The Master.

Manos Returns (2018) was a sequel reuniting several of the cast.