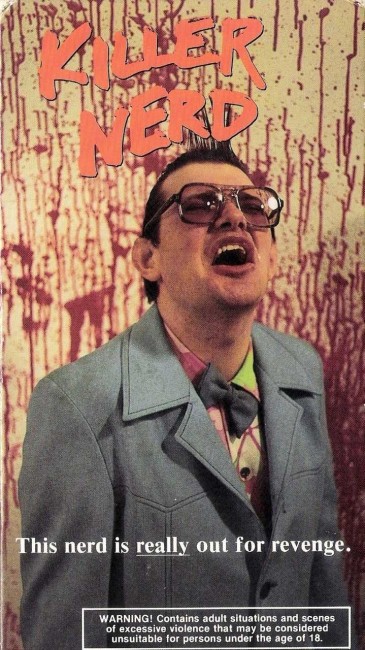 Harold Kunkle is nerdy and socially awkward in all ways. He is beaten up by the petty criminals Leelee and T.J. on a bus stop. He is teased and made fun of by co-worker Jeff, while co-worker Sally makes excuses when he asks her out. Harold’s mother insists he deal with this by accentuating the positive. Harold places all his hopes on buying a series of videos by a pick-up artist that promise to show him how to succeed with girls. However, when his attempt at a makeover instead ends up in humiliation and being beaten by the same bullies, Harold snaps and goes on a killing rampage against all those who tormented him.

Killer Nerd was a debut film for Mark Steven Bosko and Wayne A. Harold, two filmmakers from Akron, Ohio. Along with the sequel (see below), the two subsequently went on to make Girlfriends (1993) and Pig (2001), while Harold solo directed the horror comedy Townies (1999). The film was picked up for distribution by Troma.

It takes a long time to get into the film. Much of the first half at least is shot in longish scenes where people simply sit and talk for minutes as a time at kitchen tables, in offices and so on. This tends to draw things out, even though these exchanges are not uninteresting. Things perk quite a bit more after Harold snaps and starts despatching his tormentors.

What must be commended is Tony Radloff’s performance as Harold. He gets right into the character with monotone speech, dress style and way of walking. What is even more remarkable is that he never breaks character once, never tries to key the audience in or spoof the part up. And that gives the film a core of uncommon conviction. Radloff apparently gained quite a fan following as a result of the film.

In the scenes when he becomes the killer nerd, Tony Radloff gets to deliver a series of excruciating puns as was the fad of the day after the success of the A Nightmare on Elm Street films. “How about a little head,” he tells Heidi Lohr, while tossing boyfriend Richard Zaynor’s severed head onto her bed. “You can forget about that necktie for Christmas.” Or “Like my latest work, I’m a cut-up.” He even delivers his own poem: “Roses are red, Violets are placid, you screwed me over, have a face full of acid.” Not to mention the pure dementia of a scene where Harold tortures his mother while dressed in a diaper, feeding her a mouthful of drain cleaner before giving her a machete in the head.

The thing you cannot help but feel watching the film in 2020 is that today Harold Kunkle would be someone who is diagnosed as neurodiverse and suffering autistic spectrum disorder – weird obsessive behaviour, focused interests, social awkwardness, strange patterns of speech. Such diagnoses were not widespread in 1991 and so the film simply regards Harold’s behaviour as weird and anti-social. He is not exactly regarded as a figure of fun by the film, which appears to have some sympathy for him, nevertheless the premise ‘killer nerd’ is one that invites us to look at him in that way. You kind of feel that if the same were done with someone with a disability or mental health issue, it would be skirting bad taste.