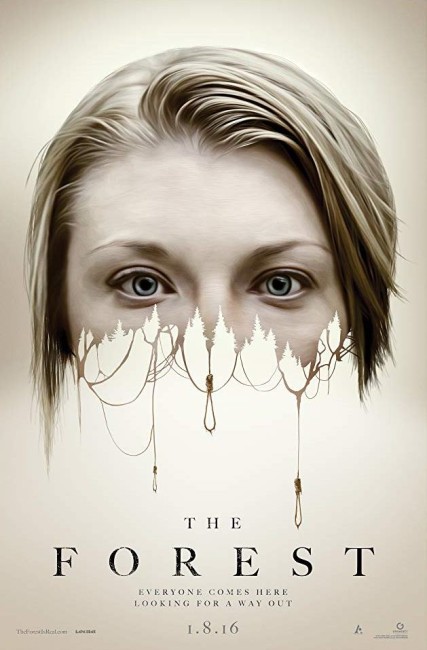 Sara Price receives a call to say that her twin sister Jess, who was working as an English teacher in Japan, has gone missing. She flies to Japan where she learns that Jess failed to come back after going into Aokigahara Forest. Nicknamed the Suicide Forest, this sits at the bottom of Mount Fuji and is where people traditionally go to commit suicide. Sara insists on going to the forest to search for Jess. At the nearby hostel, she meets Aiden, an Australian travel writer, who finds them a guide Michi who agrees to take them off trail into the forest. After finding Jess’s tent, Sara insists on staying the night in the forest, despite Michi’s warnings that bad things will happen because there is sadness inside her. As she and Aiden stay there, the dead of the forest and Sara’s own imagination come to haunt her.

The Forest is a directorial debut for Jason Zada, who had previously made several short films and co-wrote the screenplay for The Houses October Built (2014). The film is co-produced by Phantom Four, the production company of David S. Goyer, the high-profile screenwriter and occasional director with the likes of the Blade films, the Dark Knight trilogy and Man of Steel (2013), among others.

Aokigahara Forest is an existing forest that covers a fourteen square mile area at the bottom of Japan’s Mount Fuji. Since the 19th Century at least, it has been a popular location where people go to take their lives. After it climbed to more than a hundred people killing themselves per year (and a great many others never going through with it), the Japanese government stopped publishing figures on the number of deaths. The forest is also reportedly haunted by yurei, the ghosts of the dead.

Fascination with the Aokigahara Forest has turned up in several US-made films, including the low-budget Forest of the Living Dead (2010), Steven R. Monroe’s Grave Halloween (2013) and only a few months before this, Gus Van Sant’s The Sea of Trees (2015), although that was the only one of these to not be a horror film. Surprisingly, there have been no Japanese-made films on the subject so far.

I wanted to like The Forest. The idea seemed a fascinating one and the film creates a unique mythology about the place that is original and different. It is just that the script and Jason Zada’s direction make everything that transpires dreadfully uninteresting. This is a film that has a ready audience wanting a ghost story thanks to an effective marketing campaign and yet the entire first hour of the film either consists of fake dream jumps (a perpetual signal of a film that cannot generate them organically) and several scenes where Japanese seniors leer out at Natalie Dormer. There is nothing that seems remotely scary or haunted until the film has Dormer spending the night in the forest and even then the tepid and predicable scares that we get lack much in the way of teeth. The film seems to half-heartedly play the old is it real or is it in her imagination games with us. It also trying to suggest that Taylor Kinney has some sinister purpose (but then fails to develop this any further). There is nothing in anything that happens in the forest that holds any surprise, any twists, anything other than a couple of weak jump shocks.

I also could not help but feel that The Forest would have worked much better if it had had a Japanese director at the helm – someone like Kiyoshi Kurosawa, Hideo Nakata or Takashi Shimizu, who have produced incredibly haunted material over the last decade. I am sure any of these could have made a more interesting film and created a more haunted feel than someone who is clearly a stranger to Japan. It is not that The Forest runs as disrespectful of the Japanese in any way, it just plays everything safe.

It is a gaijin look in on the country and sees it as strange and alien rather than tries to understand it in any way. It is a story spearheaded by two white Americans – Tyler Kinney is supposed to be Australian but talks like a regular American, while Natalie Dormer is British but plays with a generic American accent – when all the interesting things about the film come from Japanese culture rather than American identification figures. That said, it is not even a legitimately Japanese-made film – all of the forest scenes were shot on location in Serbia with, it would appear, only the scenes at Narita Airport and some of the street scenes being filmed in Japan itself.

Mindedly, this is a story about a suicide forest than never once dips its toes into the water to examine why so many people want to commit suicide and most crucially even why the heroine’s twin sister felt she wanted to go into the forest. There is only a single suicide attempt depicted throughout but where the film leaves you with the impression that the ghosts in the forest drove the person to it. In other words, what we have is a film that plays it so utterly safe that it removes for its audience any concept of why anybody would want to contemplate the act of self-murder in the first place.

Natalie Dormer has a sparkling and insouciant presence on tv’s Game of Thrones (2011-9), she even enlivened what was no more than a background appearance in several of the Hunger Games films. Here all she is required to do is play a regular American heroine with no distinguishing features. Most actors regard roles where they get to play twins as the opportunity to show some acting muscle but here her having a twin is something that has zero impact on the film.