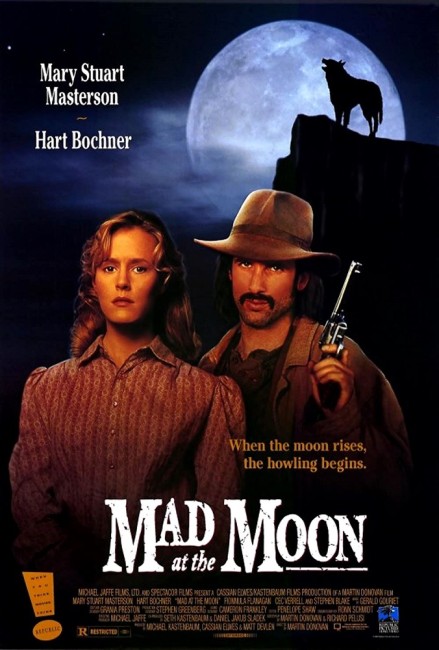 In an Old West town, Jenny Hills receives a proposal of marriage from James Miller. However, she is in love with Miller Brown who has a reputation as a troublemaker around the town. Miller pushes her away and so Jenny accepts James’s proposal. They are married and move to his farm. However, she reacts in fear when James tries to have sex. As the full moon comes, he barricades the doors and tells her to stay inside. As she looks out, James turns into a wolf under the light of the moon. The next morning she flees back to town. Her mother intercedes and makes an agreement with James for Jenny to return as long as she has a chaperone during the next night of the full moon – and so the person that Jenny chooses is Miller.

Martin Donovan is Argentinian-born director, although should not be confused with the American actor Martin Donovan. The Argentinean Donovan emerged to some arthouse success with his thriller Apartment Zero (1988) with Hart Bochner as a sexually ambiguous stranger seducing his way through an apartment building. Mad at the Moon was Donovan’s second film but did poorly in release when it came out. Donovan had been working as a writer in US television since the mid-1960s and later co-wrote the Robert Zemeckis film Death Becomes Her (1992), among other works. Donovan has only directed a sporadic handful of works since then.

Mad at the Moon has a poor reputation. As soon as it opened, I was wondering if it is maybe a film in need of serious re-evaluation. Movie soundtracks are usually so bland and clichéd they bore me to death but the score over the opening credits immediately had me going to look and see if there was a soundtrack available. The opening scene visiting a tent as a crowd gathers to watch an opera singer come with a flawless beauty.

This segues into the scene where Mary Stuart Masterson receives a visit from Stephen Blake who has come to propose, which she handles delicately at the same time as she by her own admission is wanting to come out and say no. All before heading off to the local saloon to meet with Hart Bochner in full bad boy mode. These scenes come with a slow beauty, a love of the detail of characters delivering dialogue while emotions seem to speak silent words beneath the surface. It is here that I was thinking that Martin Donovan has done something amazing and that Mad at the Moon was well worth reassessing.

The set-up reminds somewhat of the Moonstruck episode of the anthology film Kaos (1984) wherein a newlywed wife settles in for their wedding night only to discover her husband is a werewolf and it is a full moon. This has great potential in a Western setting – the wife on an isolated frontier town ranch, the husband turning into a wolf outside while she huddles indoors in fear. However, after a great opening, Mad at the Moon sputters to a halt – just at the point when the whole premises the film sells itself on starts to kick in.

In actuality, Martin Donavan seems more interested in writing a story about a woman in a marriage she has no interest in being in than he is in making a Werewolf Film. The film follows Mary Stuart Masterson’s struggle with her situation and then amusingly swings things around so that she chooses Hart Bochner to be her chaperone during the next full moon. There’s a promising almost seduction scene and the appealing idea of a love triangle between wife, the werewolf husband and her protector Hart Bochner who only comes to be with her on the full moon. This seems filled with dramatic possibilities.

Only Martin Donovan seems to have no interest in taking this anywhere either. The werewolf is introduced but entirely fails to have any threat throughout – even fails to become a ravening beast it might in a regular werewolf film. Indeed, the resolution of the film seems to be Hart Bochner confronting the transformed Stephen Blake outside and telling him to essentially pull himself together, where you get the impression that any lycanthropy might all be psychological. Equally, Donovan has no interest in exploring the love triangle or anything to do with the relationship between Mary Stuart and Hart and has Hart simply walks off straight after the above scene, leaving the whole film awkwardly hanging without any satisfying dramatic resolution.