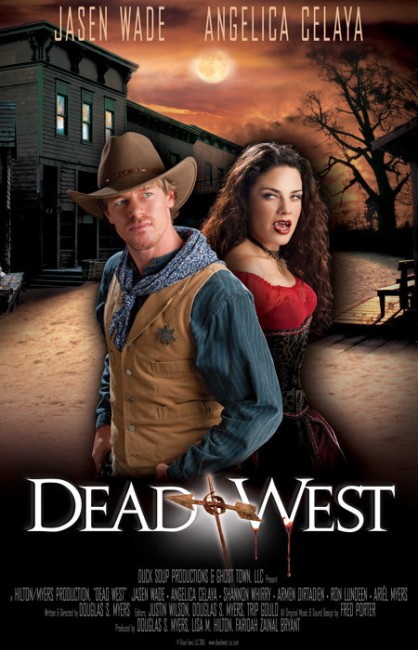 Johnny Dust is an actor who has had some success in Westerns. With his career now on the wane, he is kept employed at the Old Tucson Studio, the tourist attraction of a mocked-up Old West town where many classic Westerns have been filmed. Johnny is upset as new management takes over the studio. The new owners announce a series of changes aimed to appeal to younger audiences, including the decision to stage a Halloween haunt at the Old Dutch Mine. When new manager Joe Stanburg sends a construction crew in to examine the mine, they end up stirring Indian remains. Johnny’s girlfriend Gloria Valenzuela auditions for the role of the vampire seductress in the Halloween haunt. Afterwards she and others appear changed and Johnny realises they have been affected by what was stirred up in the mine.

The horror Western has been with us since the 1950s when the first vampire/Western mashup occurred with Curse of the Undead (1959). We have seen assorted variations since, including other Vampire Westerns such as Billy the Kid Versus Dracula (1966), Sundown: The Vampire in Retreat (1989), From Dusk Till Dawn 3: The Hangman’s Daughter (2000) and Bloodrayne: Deliverance (2007). (For more detail about genre/Western hybrids, see Weird Westerns).

The immediate disappointment about Dead West/Cowboys & Vampires is that it is not a Western as it seems to promise to be. The film is set contemporary and any Western aspect extends no further than the locale of the Old Tucson Studio. This is a real-life location, a mocked-up Western town, which operates as a tourist attraction. It has used as a film location since 1939 for a long list of films including Gunfight at the OK Corral (1956), 3:10 to Yuma (1957), Rio Bravo (1959), The Trial of Billy Jack (1974), Tombstone (1993) and The Quick and the Dead (1994), even scenes from Death Wish (1974), among others. The film appears to have been conceived around the use of the locale.

The film was shot as Dead West, although I am unable to ascertain if it was ever actually released under that title. However, following the high-profile Cowboys & Aliens (2011), it was released in 2012 as Cowboys vs Vampires. There becomes a problem with this in that it is a stretch to describe what we have as a vampire film. Indeed, the film is frustratingly vague about what actually is going on. There is a scene where new owner Armen Dirtadian opens up the Old Dutch Mine and there is suggestion his workers have disturbed the good old cliché of the American Indian burial site. Not long after people start acting menacing and doing … it is not exactly clear what. The menace, which seems to be more along the lines of stirred Native American spirits than vampires, is unclear in nature. There is certainly not any traditional blood-drinking, sleeping in coffins type vampire activity going on.