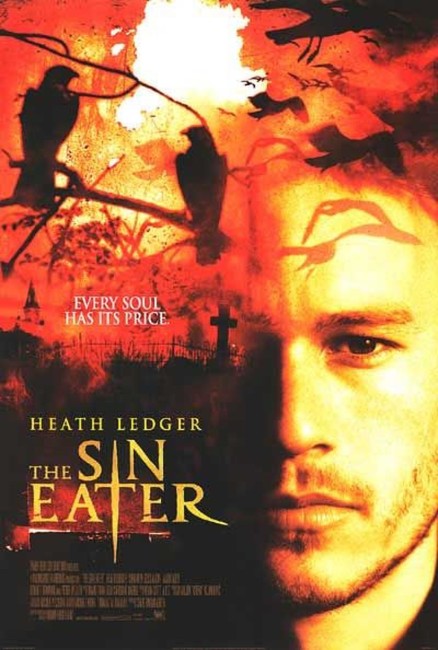 Alex Bernier is a Catholic priest who belongs to the Carolingian order, which are considered outcasts from the church mainstream. Alex receives news that his mentor Father Dominic has committed suicide in Rome. He immediately flies there. He is forced to take with him Mara Williams, a girl that Alex once delivered in an exorcism – she subsequently tried to kill him and has now escaped from psychiatric custody. In Rome, Alex finds that the church have refused to bury Father Dominic in hallowed ground because he was a suicide. He deliberately disregards this to give his friend proper burial. In investigating, Alex comes to believe that Dominic was killed by a mythic Catholic figure known as The Sin Eater who physically devours the sins of those who have committed acts that the church considers unforgivable so that they can gain entry into Heaven. Alex is then contacted by the Sin Easter himself, a man named William Eden. Eden has remained immortal since the time of the building of St Peter’s Basilica when he allowed the eating of his excommunicated brother’s sins so that he could gain entry to Heaven, however this meant that he was then forced to inherit the role. Eden encourages Alex to follow his feelings for Mara. However, Alex also realises that Eden want him to become his successor as The Sin Eater.

The promotion for the The Sin Eater seemed confused about what it is trying to sell the film as – the US title The Order tried to pitch the film as a Catholic conspiracy film along the lines of The Da Vinci Code (2006), while the international title The Sin Eater tried to sell it as a horror movie. Despite not easily being able to be categorised as either, The Sin Eater is a film of fascinating originality. The nearest you could pigeonhole it is in similar territory to The Da Vinci Code and its revelations about hidden secrets of the Catholic Church, although The Sin Eater is much more of an overtly supernatural/fantastique film than The Da Vinci Code. One might look also to the swathe of Catholic films that came out in 1999 – in particular the failed Stigmata (1999). That said, The Sin Eater/The Order is a work of its own unique strengths that few other films can approximate in terms of originality.

What one expected from the way that The Sin Eater is pitched was a variant on The Exorcist (1973). However, Brian Helgeland quickly surprises and dispenses with all post-Exorcist expectations and shock theatrics. Instead, he delves into a complex and highly original work about Catholic redemption and matters of theological gravity (the question of the church’s right to deem some sins unforgivable). Helgeland certainly gives the appearance of knowing his Jesuit basics and creates a fascinating and appealing mythology behind the Church secrecy.

There are some fine scenes venturing down into the Vatican catacombs to meet with the secret society of Shiva who hide in red hooded robes and tell Heath Ledger that he must ask his questions of a dying man and then order him to turn around whereupon they hang a man in front of him so that he can ask his question in the man’s dying breath; or with Mark Addy being tempted aside during the return journey by a siren’s call from the catacombs.

The film gains its feet when Benno Fürmann enters the scene as the title character. Fërmann gives a wonderfully smooth performance and Helgeland provides him with cool and subtly disquiet dialogue. There are some fascinating twists of plot – the revelation of the identity of the Black Pope and their political machinations within the Vatican; the scenes with Benno Fürmann seducing Shannyn Sosammon to suicide in beautifully seductive tones. Not to mention a stinging and effective just desserts ending.

The originality of the script is such that when Brian Helgeland does get to the various shocks – the scenes where the sin is eaten and the dead erupt into silver tendrils of light, the ghost women causing Mark Addy to be impaled with flung bolts – that it feels like the film is unnecessarily falling from an intellectual level to a hardly necessary visceral one.

Heath Ledger seems miscast in the role of the priest. At the time, Heath Ledger was still cast in pretty boy image and had yet to establish himself as a serious actor as he would a couple of years later with films like Brokeback Mountain (2005), Candy (2005) and The Dark Knight (2008). He seems there solely because the film needs a young handsome lead, not because he fits the part – alas, The Sin Eater is not the type of film that requires a youthful good-looking star to carry it. On the other hand, Mark Addy has a wry and likeable presence and plays with a naturalism that draws the sympathy in the film to him whenever he is around.