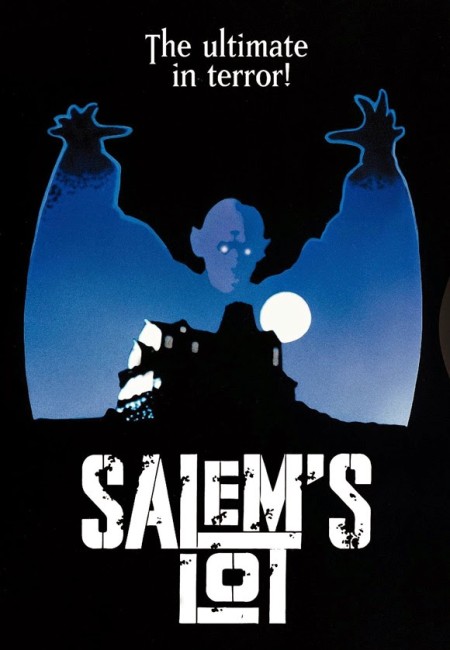 Writer Ben Mears returns to his hometown of Jerusalem’s Lot in Maine where he becomes interested in writing a novel set around the sinister old mansion that overlooks the town. The town is then struck by a series of killings where the victims are left drained of blood. Ben and Straker, the mysterious owner of a new antique store, become the immediate suspects, being the only strangers in town. When the dead start returning from the grave to drink the blood of the living, Ben and young monster movie fan Mark Petrie become the only ones willing to believe that they are facing vampires. Together they set out to trap and kill Barlow, the master vampire who inhabits the house on the hill.

Salem’s Lot (1975) was Stephen King’s second novel and this production was the second-ever screen adaptation of King’s work, following Brian De Palma’s highly successful version of Carrie (1976). For a time, Salem’s Lot dallied about as to whether it would be a theatrical film, with directorial names such as George A. Romero, director of Night of the Living Dead (1968), and Larry Cohen, director of It’s Alive (1974), associated with it.

1979 brought a vampire movie revival, which also included the likes of the lavish Frank Langella remake of Dracula (1979), Werner Herzog’s Nosferatu the Vampyre (1979) remake, the killer bat movie Nightwing (1979), the disco film Nocturna: Dracula’s Granddaughter (1979), the Dracula spoof Love at First Bite (1979) and the sex comedy Dracula Blows His Cool (1979), proved the impetus to allow Salem’s Lot to get off the ground as a two-part tv mini-series. The directorial chair eventually went to Tobe Hooper – Salem’s Lot was Hooper’s first Hollywood mainstream production after the cult success of The Texas Chain Saw Massacre (1974).

Stephen King says he was inspired back when he was teaching an English Lit course on Bram Sttoker’s Dracula (1897) and he and the students ended in a discussion of how Dracula would handle the modern world. King is equivocal about Salem’s Lot in particular the characterisation of Barlow. That notwithstanding, Salem’s Lot is one of the most underrated of Stephen King adaptations. Certainly, you can understand where King is not too enthused as the mini-series makes a number of changes to the book. It cuts several characters, compacts a couple into one. There are a number of characters introduced and some of the plot strands are left uncompleted. Bonnie Bedelia’s return as a vampire is peculiarly placed at the end of the story, which ends up oddly unbalancing the climax.

Most notable of the changes is in the character of the vampire Barlow. The mini-series turns him into a vampire clearly modelled on Max Shreck in Nosferatu (1922) and eliminates all his dialogue – here he has a single line, whereas in the book he has speeches that go on several pages explaining his origin. In fact, thanks to James Mason’s magnetic performance, the central villain of the show emerges as Straker, who is meant to be the vampire’s daytime aide, rather than Barlow – by comparison try and imagine a version of Dracula (1897) where Renfield is a more prominent character than Dracula.

Largely, Tobe Hooper prefers to not concern himself so much with the adaptation but expands outward on it, staging it as a series of set-pieces. These set-pieces are intensely captivating – the gravedigger trapped in the grave he is digging as the vampire child rises from its coffin; Mark Kerwin watching in bed as Brad Savage eerily floats up in a cloud of mist tapping at his window; a body rising from a morgue table and its graphic dispatch with a crucifix made of wooden spatula; a gripping sequence with David Soul and Mark Kerwin in a cellar struggling to stake Barlow’s body as the sleeping brood of vampires wake up as the sun sets; and one gratuitous but blackly funny sequence with George Dzundza returning to surprise his adultering wife and her lover with a shotgun that entirely jolts one out of their seat. Certainly, Salem’s Lot‘s failing is a tendency to be written around these set-pieces – but what gripping set-pieces they are.

Everything else makes Salem’s Lot a class production. Heartthrob David Soul, then at the height of his popularity with the tv series Starsky and Hutch (1975-9) is dull, but there is a fine supporting cast with everybody else creating well rounded characters, especially the delightfully chirpy Bonnie Bedelia who makes a striking transformation from schoolteacher to seductive vampire. The best of these is James Mason, who appears to be having some of the best fun he had in his latter years. Mason’s dry but melodious, deliberately absent-minded intonation lends itself to a performance of startlingly calculated evil. Production designer Mort Rabinowitz also delivers a memorable haunted house set.

Salem’s Lot is available in two forms. The most prevalent is the original 183 minute mini-series, which is still seen in that format on video and cable revival today, although is often cut by as much as 30 minutes running time. At the same time, there was also a truncated feature-length 112 minute theatrical release print that was shown in some countries.

Larry Cohen who, as mentioned above, was originally pegged as director, made a loosely related sequel A Return to Salem’s Lot (1987). The Stephen King novel was later remade as another two-part mini-series ‘Salem’s Lot (2004), featuring Rob Lowe in the David Soul role, Donald Sutherland as Straker and Rutger Hauer as Barlow. This is a different version of the story than the 1979 version and, though the lesser, is not uninteresting. A new film version is due with Salem’s Lot (2022).