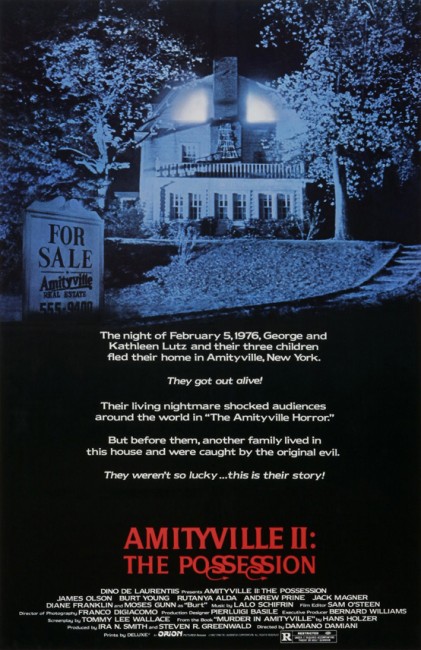 A Catholic family move into the Amityville house but are not there five minutes before things supernatural start happening. The eldest son Sonny is possessed by a voice that talks to him out of his Walkman. The voice drives Sonny to seduce his sister and then blow the entire family away with a shotgun. After Sonny is arrested, Father Tom Adamski becomes convinced that he is possessed and presses the police to allow him to perform an exorcism.

Amityville II: The Possession purports to be a prequel to The Amityville Horror (1979). The Amityville Horror, adapting a book that claimed to be based on actual events (that were later proven fabricated), had been a big hit. The rights to the original were brought up by producer Dino De Laurentiis who made this sequel with Italian director Damiano Damiani and a script from former John Carpenter associate Tommy Lee Wallace, later a genre director in his own right (see below).

Rather than a sequel, Amityville II: The Possession purports to tell the events leading up to the murder that the first film mentions as having occurred several years before in the house. (That said, the sequel does not appear too concerned with continuity as, rather than being set earlier in the 1970s, it is clearly set in the early 1980s). There is some factual basis to this as the real-life Amityville house had also been the site where Ronald DeFeo Jr had killed his father, mother, two sisters and two brothers in 1974. However, there is no credible claim to the idea that DeFeo was ever possessed or had an incestuous relationship with his sister.

Unlike the original film, Amityville II: The Possession fails to take itself with the deadening solemnity of trying to pose as a true story and proves considerably more entertainingly as a result. The influence is now clearly the recent hit of Poltergeist (1982) and director Damiani keeps things coming quick and fast.

There are times when Damiano never knows when over-the-top is enough – in one shot, the camera does a 180o vertical roll over a character’s head and then another horizontal 180o roll to right itself and come face to face with him; in another shot, Jack Magner lies on a bed pinned down by the demon while the camera wildly zooms up and down on him like the cameraman was jumping up and down on a trampoline.

By far the better shocks are those that come more subtly – the priest’s dream that the family are killed only to wake and find they are, or with Malcolm McDowell-lookalike Jack Magner’s creepy seduction of his sister. The latter half where the makeup effects team take over and rehash The Exorcist (1973) is much less interesting. In this author’s opinion, Amityville II: The Possession is the best of the Amityville films.