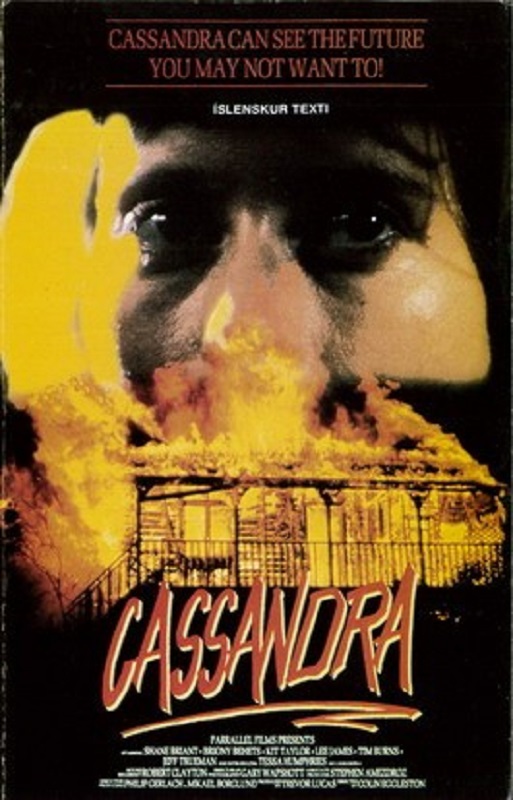 Cassandra Roberts starts to receive a series of visions about events from her childhood. She believes that these events led to the suicide, possible murder, of her Aunt Jill. This upsets her mother and father who are afraid of Cassandra learning the truth about what happened. At the same time, someone murders Cassandra’s father’s mistress and then starts stalking her parents.

Cassandra is a minor and largely forgotten Australian-made clairvoyance film. It was one of a handful of genre films made by Australian director Colin Eggleston. Eggleston premiered with the excellent and greatly underrated Nature’s Revenge film Long Weekend (1978) and went onto make the likes of The Little Fella (1982), Innocent Prey (1984), the madcap Indiana Jones ripoff Sky Bandits/Sky Pirates (1985) and Outback Vampires (1987).

Cassandra isn’t a particularly exciting film. For one, it takes an inordinately long time to give us an idea of what sort of film it is. Between the domestic banalities of Tessa Humphries’ father Shane Briant’s adulteries and his job as a fashion photographer, not to mention the childhood flashbacks to events we are not sure about, it is hard to see where the film is going during its first half-hour. Eventually it turns out to be a variant on Eyes of Laura Mars (1978) and a host of clairvoyant thrillers that have drawn from its basic plot.

Colin Eggleston’s direction is uninvolving, particularly when it comes to the various sequences involving the pursuit of Briony Behets and Susan Barling. Eggleston seems disinterested in doing anything more than perfunctorily moving through the material, certainly never in generating suspense. Unlike Laura Mars, Cassandra is a passive character who is never involved in the action for the most part – she only seems to sit around without ever doing a heck of a lot. Certainly, one of the great pluses of the film is Tessa Humphries, the daughter of Barry Humphries (aka Dame Edna Everage), who has a fragile moral strength and quietly subdued beauty.

The film does offer up a reasonable surprise in the middle where it turns out that what we had originally taken to be another Laura Mars clairvoyant thriller copy is actually [SPOILERS ALERT] a thriller about twin telepathy. The advent of the brother reminds considerably of the characterisation of Michael Meyers in Halloween (1978), although the revelation of his identity is fairly obvious.