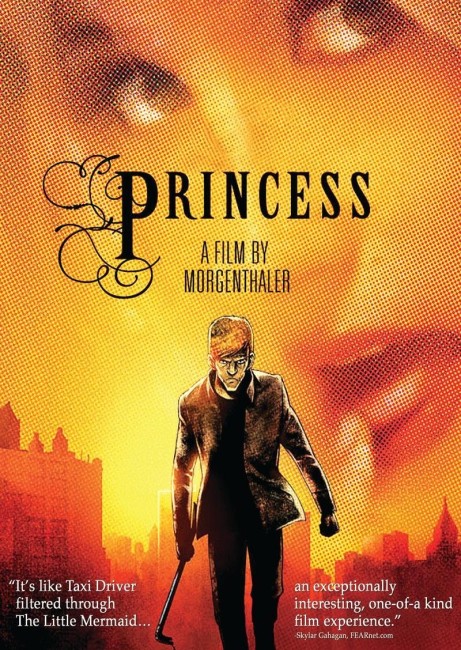 Princess is the debut feature from Danish director Anders Morgenthaler. Morgenthaler had previously come to attention writing, directing and performing on Danish comedy tv series such as Stig Römer Live (2001) and Wulffmorgenthaler (2005), which contained a mix of animated and live content, and had also produced the animated children’s tv series Mira + Marie (2003). It is perhaps no particular surprise that Princess is co-produced by Zentropa Entertainments (listed on the credits as Zentropa Grrr, perhaps due to the film’s angry nature), the production company of the wunderkind of Danish cinema Lars von Trier. The stamp of von Trier lies all over Princess in the film’s anger and willingness to go out on an edge in terms of outré material.

In terms of plot description, Princess feels like a combination of vigilante dramas such as Death Wish (1974) and Taxi Driver (1976) having been thrown together with Hardcore (1979), which had George C. Scott scouring the sordid depths of the porn industry in search of his missing daughter. One was a little dubious about Princess before sitting down to watch it – the plot’s synopsis seemed to be shaping up to be a conservative anti-porn rant. While it would not have taken too much of a push for Princess to go that way, Anders Morgenthaler remains remarkably politically detached throughout – he succeeds in making his point with considerable vituperance, largely by concentrating the outrage of the film on the effect that the mother’s lifestyle had on the little girl caught up in the midst of it.

That said, Princess fails to work effectively as a revenge drama in the Death Wish tradition. Morgenthaler seems only occasionally interested in this side of the story. If you imagined Princess as a live-action Hong Kong or South Korean action film – where you suspect it would work far more effectively – one could envision the filmmakers having a field day with the material, where they would have concentrated on the anger and grimness of the central character’s crusade and taken great delight in the means whereby the various scumbags were blown away. Instead here, there are times, like where Mia kills the hood and especially at the end bombing, where Anders Morgenthaler makes you question the rightness of the character’s moral drive.

Where Princess works better is as a story about the horror of innocence. Rather than a revenge drama, what drives the film is the relationship between August and Mia – his earnest sincerity and caring and her less-than-childlike reactions. There is something lovely to these scenes and they are often conveyed with some amusement upon Morgenthaler’s part.

These are contrasted with a number of shock moments – like the scene where August gives a very reluctant Mia a bath and then she reaches up and unzips his fly; or where she goes out to join the other children of the neighbourhood who are playing family and say that they already have a baby, whereupon she offers to be the whore and next appears inside a shelter offering to drop her pants for two boys who want to shove a stick up her ass. The glimpses we see during these scenes of someone who has been around commercial sexual exploitation so long that it has begun to affect her as a total norm is rather shocking. The other shock scene is the one where August attacks one of the hoods and lets Mia come up and start hitting the man’s crotch with a golf club and then just as they are about to go she comes back and beats the man’s head in with the club, leaving him dead.

The animation is slim, nevertheless effective for what is required of it – certainly Anders Morgenthaler gives the film a ferocity that stands out well above any limitations. Morgenthaler mixes animation and occasional moments of live-action – the images of porn that we see on video-screens are all live-action, the flashbacks to Christina’s exploitation are grainy videocam blowup and there is a peculiar fadeout at the end with the three characters – August, Mia and Christina – all reunited in heaven where they are played by the actors who voiced the parts. Though Princess is largely a revenge drama, it does have minor moments of fantasy – such as the character of Mia’s toy Multe who comes to life and hops about interacting with both her and August, as well as various animated gulls that fly from out of the child’s lantern and the afterlife coda, which is sentimental almost to the point of being parody.

Anders Morgenthaler subsequently went onto direct the live-action horror film Ekko (2007) and I Am Here (2014) in which Kim Basinger delves into the underground market for baby adoptions as well as the animated K is for Klutz segment of The ABCs of Death (2012).