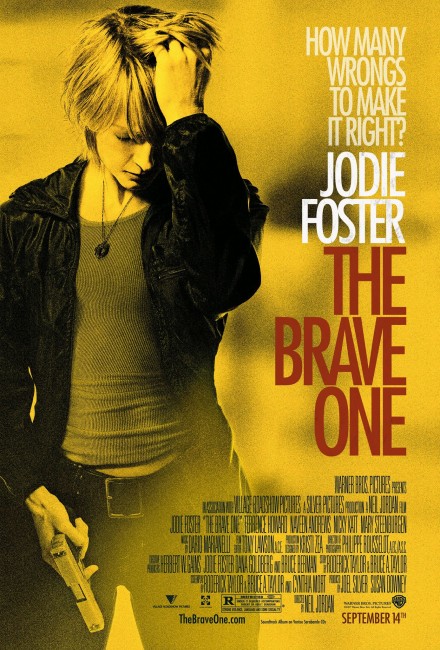 Erica Bain is the host of a New York radio show ‘Street Walk’ where she wanders the streets, philosophically reminiscing about the city. She is out walking in Central Park with her fiancee David Kirmani one evening when they are menaced by a group of thugs who beat both of them, killing David. Erica slowly recovers, although the police are unable to find the attackers. Venturing outside again, Erica immediately buys an illegal handgun. While in a convenience store, she is witness as a man enters and shoots the cashier, but Erica pulls her gun and shoots the man dead. Next she shoots two thugs after they harass her on the subway. The media dub her a vigilante. At the same time, she befriends Mercer, the detective investigating the vigilante killings. As she continues her crimewave, he begins to suspect her of being the vigilante.

There has been a particular sub-genus of these vigilante films that could be called Avenging Angel films – the women’s vigilante drama. These have stretched from Death Weekend/The House By the Lake (1976), the raw and savage Day of the Woman/I Spit on Your Grave (1978), Abel Ferrara’s Ms 45/Angel of Vengeance (1981), Michael Winner’s seedy Dirty Weekend (1992), the censorship-outraging Baise-Moi (2000) to more mainstream fare such as Thelma and Louise (1991) and trite fluff like Enough (2002). The Brave One could almost be considered a remake of Ms 45 – both are set in New York City; Ms 45 had Zoe Tamerlis taking up handgun after being raped twice, while The Brave One has Jodie Foster arming herself after she is beaten and her fiancee killed. Both films also blur the boundary lines of the vigilante drama rather than simply seeing the avenger as someone seeking justice in black-and-white terms, with Ms 45 pointedly showing the heroine as unbalanced and randomly killing all men she encounters irrespective of who.

The Brave One was a return to the director’s chair for Irish director Neil Jordan. Neil Jordan first appeared in the 1980s with the Angel (1982), a drama set during The Troubles of Northern Ireland, before going onto great acclaim with the likes of Mona Lisa (1986), Michael Collins (1996), The End of the Affair (1999) and especially The Crying Game (1992). Jordan’s films vie between clearly commercial projects and those that are personal subjects – many of his films have a strong fascination with various types of alternate sexuality or gender identity. Jordan has also made a number of genre films including the deconstructed fairytale The Company of Wolves (1984), the slapstick ghost story High Spirits (1988), Interview with the Vampire: The Vampire Chronicles (1994), The Butcher Boy (1997), a tale of a highly disturbed childhood, the clairvoyant thriller In Dreams (1999), Ondine (2009) about a possible sea nymph, the vampire film Byzantium (2012) and the psycho-thriller Greta (2018). On this side of the 00s, Jordan’s output as director has slowed down, with only occasional efforts like the caper film The Good Thief (2002) and Breakfast on Pluto (2005) about a drag performer.

The Brave One is clearly one of Neil Jordan’s more commercial projects. He has teamed up with of all people Joel Silver, the producer of high profile action films such as Lethal Weapon (1987), Die Hard (1988) and The Matrix (1999). As such, The Brave One does not feel as fired up as some of Jordan’s other films – it is one of the quieter films that he has made. Certainly, with Neil Jordan’s hand on the film, The Brave One resists many of the opportunities that the Joel Silver association must surely have presented to turn it into a gleefully violent Death Wish copy. Jordan always keeps The Brave One as a character-driven film – it is less a vigilante film than it is a drama about one person stepping over into a personal darkness. For all that, the darkness we enter along with Jodie Foster is never one that makes you gasp or feel any dark thrill – it is ultimately too mannered a film. Equally, The Brave One is a film that feels moved not so much by its character’s psychological fracture than it does by its plot twists and contrivations that the screenwriters are pushing it towards.

The interesting choice for the central role is Jodie Foster, who also executive produces the film. Indeed, the Brave One of the title could well be Jodie Foster herself. She too has had a real-life case of being on the receiving end of crazed gun-toting crazies after John Hinckley developed a fixation with her and in 1981 attempted to assassinate President Reagan in an effort to get her attention. In a way, taking on the role of Erica here feels like Foster confronting her own demons. Moreover, with Jodie Foster present, you cannot help but compare The Brave One to the first role in which she came to public attention – Taxi Driver (1976). Both The Brave One and Taxi Driver are similar films – they take place in New York City and feature a central character who buys a handgun and decides to take a stand against the crime in the city, killing people in a series of vigilante acts.

In other ways, The Brave One and Taxi Driver are very different films – where Martin Scorsese saw New York City as a cesspit of sin and moral corruption, The Brave One is at opposite extremes – Jodie Foster has several statements where she rather incredulously calls New York “the safest city in the world”. Like Robert De Niro’s taxi, we see her drifting through the streets of the city but her voiceovers are not ones seething with built-up violence at the corruption but tend to be wistful with a nostalgia for the city’s passing landmarks. Where in Taxi Driver you saw that it was the moral disease of the city and the unattainability of an ideal of middle-class life that caused Robert De Niro to snap, here Jodie Foster is someone who lives in that safe middle-class world and it is only the presence of street violence bursting that bubble that cause her to snap and take up arms.

While well made, The Brave One is ultimately a safe film. The main problem I had with it was the far-too-convenient ending. Neil Jordan succeeds in taking us into a moderately dark place throughout. However, the end of the film [PLOT SPOILERS] where Jodie Foster shoots several of her attackers and then detective Terrence Howard turns up to save her and conveniently bends the law so that she get off feels far too pat. A revenge film should either get your primal red-blooded if not redneck part of the brain worked up to the point that all liberal instincts go out the window and one is cheering on the scumbags getting their justice at the end of the avenger’s gun barrel a la Death Wish and Day of the Woman/I Spit on Your Grave; or else it should take the more adventurous route of films like Ms 45, Dirty Weekend and Taxi Driver in reaching an end point where we come to regard the vigilante’s actions as morally dubious. The one thing that a revenge film should not do is reach a pat ending that pulls back from the darkness to have the law paternally pat Jodie Foster on the head and contrive a way to bend the law to allow her to keep doing what she does.

Jodie Foster has done a number of these damaged women parts in recent years and gives a strong and convincing performance. Her very presence anchors The Brave One as something more serious and philosophical than the red-blooded revenge fantasy it nominally is. She is well placed up against the fine and rising Terrence Howard who makes an equally strong impact on the film. In particular, there is an excellent scene where she and Terrence Howard sit talking in a cafe and he baits her with letting her know what she is doing without ever coming out and saying so.