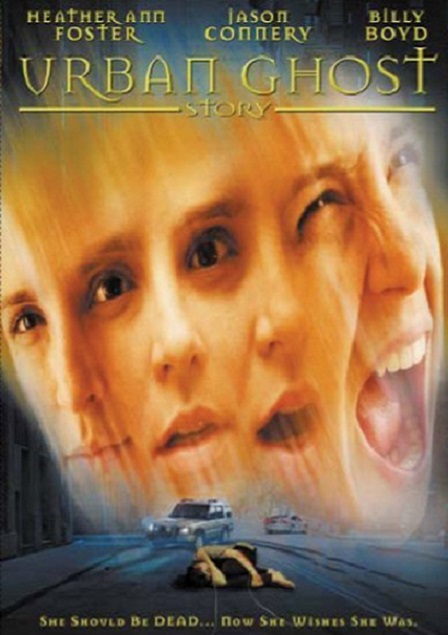 Solo mother Kate Fisher and her two children are terrorised in their Glasgow tenement by an apparently supernatural force that seems to centre around the adolescent daughter Lizzie. It could be the spirit of a neighbouring boy who was killed in a joyriding incident with Lizzie. They are driven insane by the phenomena but social services are of no help in relocating them. In desperation, Kate turns for help to everybody from a tabloid journalist to the church to parapsychologists and New Age exorcists, with each offering their own explanation but also trying to exploit them for their own purposes.

In this film’s need to specifically differentiate that it is an ‘urban’ ghost story comes the suggestion that all other ghost stories are by comparison rural in nature, something that could not entirely be said to be correct. Certainly, the classical haunted house is invariably rural in setting but not exclusively – the Poltergeist and Amityville series of films being notable examples of other urban, or at least suburban, ghost stories.

Nevertheless, Urban Ghost Story uses its differentiation with some justified merit. It uniquely translates the ghost story genre to a tenement locale in an inner-city ghetto, a locale that offers as much a whole new dwelling for the genre as it does a whole new social milieu. Here the solo mother figure has to deal as much with the haunting itself as she does with petty loan sharks threatening violence, drug addicts shooting up in the hallway and the welfare department who insist that her belief in the haunting is a form of child abuse. With a grim irony, her plight in being trapped in the situation comes not through a failure to leave but through the welfare relocation program laughing at her request for transferral on the grounds that her apartment is haunted. In this world, it seems not entirely inappropriate that the person the solo mother immediately turns to for help is not any traditional priest but a tabloid journalist.

As ghost stories go, director Genevieve Jolliffe comes up with some okay shocks that mostly consist of surprising the audience with loud, unexpected sounds. By and large though, her interest in the film is not in scaring people. Far more interestingly, the film falls into a small sub-genre of supernatural films whose paranormal content hovers in a twilight zone of uncertainty between whether the manifestations can passed off with a rational/psychological explanation or are genuinely supernatural.

The classical model for this type of story is Henry James’ novella The Turn of the Screw (1898) which has been filmed several times, most notably as The Innocents (1961), a story that leaves it up to the reader as to whether the ghosts exist or are only projections of the repressed heroine. The model was used most effectively by producer Val Lewton for a series of films in the 1940s beginning with Cat People (1942) and continues to be used sporadically right up to the contemporary likes of The X Files (1993-2002, 2016-8).

In many ways, Urban Ghost Story makes one think of a better version of the intermittently interesting The Entity (1982). Urban Ghost Story is notable among this genre of reason-vs-supernatural ghost stories of offering not just a single dichotomy between the paranormal and more mundane explanations but vying between an entire handful of potential explanations. Is the haunting caused by the spirit of the boy that was killed in an accident that daughter Lizzie was responsible in part for? Is it, as the exorcists believe, a demon that was brought back from beyond in the three minutes that Lizzie spent dead following the accident? Is it, as the parapsychologists believe, caused by leakage from an electrical conduit under the bedroom floor? Is it, as the tabloid reporter accuses, the manipulations of an attention-seeking daughter? Or is it, as child welfare accuses, hysteria drummed up by the tabloid reporter’s sensationalistic articles?

The film happily vies between allowing each explanation valid grounds for possibly being true. Each explanation is offered with some plausibility while at the same time almost every person offering the explanation is seen to be trying to exploit the situation in some way. In the end, the film still leaves the explanation for the haunting undecided. Slightly at odds with this, the film’s emotional resolution comes when Lizzie confronts the guilt she has been holding in and admits that it was she that was driving the car in which the boy was killed and seemingly in so doing the family are relocated and allowed to move beyond the ghetto for an impliedly better life.