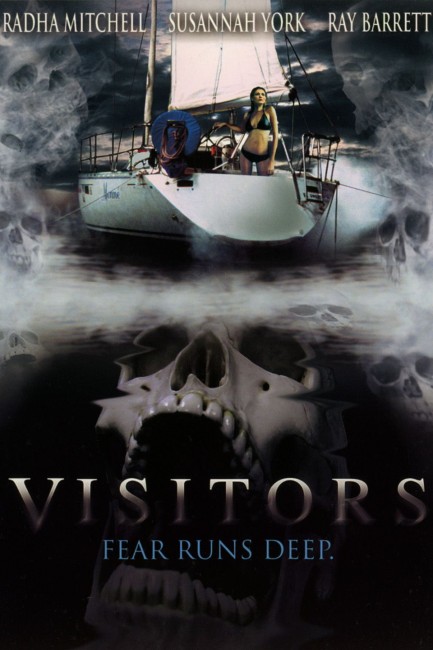 Australian yachtswoman Georgia Perry is attempting to become one of the few women to ever sail around the world solo in her yacht Leander. However, the wind has fallen and she has become stranded in the Indian Ocean – but to use her engines to move on would be to forsake the race. While she waits adrift, her mind begins to wander. Ghosts appear to her – at first, a fantasy lover but then the ghost of her mother, come to punish Georgia for placing her in an asylum and abandoning her. As marauding pirates also attack, Georgia cannot be sure any longer what is real and what is in her mind.

For a time during the 1980s, Australia’s Richard Franklin was a genre director worth watching. In Australia, Franklin made the psychic coma patient film Patrick (1978) and the excellent psycho-thriller Roadgames (1981). He was brought to Hollywood to make the well-worthwhile Psycho II (1983) and went onto a handful of other genre films of variable effectiveness – the children’s spy film Cloak and Dagger (1984), the killer chimp film Link (1986), the pilot for tv’s Beauty and the Beast (1987) and FX2 (1991). Subsequently, Franklin returned to Australia where he spent most of the 1990s working in television, branching out to direct the occasional serious dramatic film like Hotel Sorrento (1995) and Brilliant Lies (1996). Visitors was Richard Franklin’s long-awaited return to genre material and his first re-teaming in a number of years with frequent collaborator, the veteran Australian genre screenwriter Everett De Roche. (Sadly, Visitors was also Richard Franklin’s last ever film and he died from cancer in 2007).

Visitors is a ghost story. Although it is a ghost story that hovers in a place of ambiguity where you are not entirely certain if the ghosts are real or are in Radha Mitchell’s imagination as a result of her isolation, or hallucinations brought on by fumes or even the mysterious barnacles in the bilge. Moreover, the film is an isolation story – a ghost story almost entirely located within the highly contained space of a small yacht. Imagine a mixture of the other great Australian yachtboard thriller Dead Calm (1989) and The Shining (1980) and its ambiguous ghosts of the mind, or even perhaps Roman Polanski’s Repulsion (1965), which subjectively took place inside the hallucinations of a woman’s fraying sanity. There are a number of similarities to Richard Franklin and Everett De Roche’s Roadgames, which was substantially a one-person drama about Stacy Keach in a truck where the entire film equally wavered between real and possibly imagined threat.

Visitors was a strong return to genre form for Richard Franklin. He achieves a genuine sense of isolation for Radha Mitchell. The early scenes develop out with some subtle jumps – the foot on the window, the Maori tribesman who suddenly appears on the boat and then with spooky subtlety picks up the cat and joins Radha in bed, the mother’s appearance out of the cloud of fumes, Radha spookily finding a cigarette left burning after she has dismissed what she thinks is an hallucination. Richard Franklin keeps piling these jumps on with considerable effect – the sudden appearance of Susannah York when Radha Mitchell opens the bathroom door contains a jolt that makes everybody jump in their seats.

The only dissatisfaction comes in the ending where Radha manages to banish her mother with bland effect. The happy ending where she sails away to join her possibly imaginary lover in Auckland comes as somewhat false, as the film has not done enough to build the other character up in a way that makes this seem an adequate payoff.

Radha Mitchell, an Australian actress who caught Hollywood attention after Pitch Black (2000), gives an intelligent performance. Expectedly, it is the veterans among the cast who hold the stage – Ray Barrett, who plays Radha Mitchell’s father with a perfect Aussie rough diamond characterisation, and Susannah York, who gives a performance of madness that holds some frightening depths.