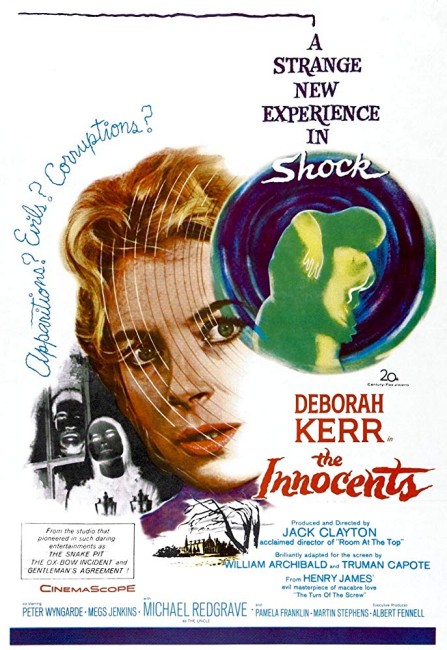 Miss Giddens accepts a position as a governess tending brother and sister Miles and Flora on the lush Blye country estate. She begins to see apparitions in the grounds and comes to believe that these are the ghosts of Quint and Miss Jessel, the previous groundsman and governess. Quint was a cruel man who used to beat Miss Jessel, something that she eventually came to enjoy. Miss Giddens believes that the ghosts of Quint and Miss Jessel are possessing Miles and Flora so they can touch each other again – this being the only explanation she can find for the cruel games the two children play. The children either cannot or deny seeing the ghosts. Miss Giddens forces them see to try and see, believing that that is the only way they can ever be freed.

Henry James’s The Turn of the Screw (1898) has been called the first Freudian ghost story and remains a literary classic. It is a story that hovers in a delicate state of ambiguity about whether its ghosts are real or whether the governess is projecting her own repressed imaginings onto the children’s actions. Much academic debate has centred around whether The Turn of the Screw can be read as a ghost story or as a mundane tale of psychological repression. This ambiguity of approach, between whether events are supernatural or imagined, was highly influential and almost certainly served as inspiration to producer Val Lewton, who made a series of horror films that delicately hover between mundane explanation and the supernatural, beginning with Cat People (1942).

The Innocents was the first screen adaptation of The Turn of the Screw and came from some eminent hands. The screenplay comes from no less than Truman Capote and Rumpole of the Bailey (1978-92) creator John Mortimer, while the direction of the film was given to Jack Clayton, then mostly known for the highly acclaimed Room at the Top (1959), as well as the producer of some of the better British dramatic films during the 1950s. [Jack Clayton would later return to genre material with the psychological Gothic Our Mother’s House (1967) and the fine adaptation of Ray Bradbury’s Something Wicked This Way Comes (1983)].

There has been much debate about whether the subtleties of Henry James’s story are dealt justice in The Innocents, although this is very much an academic one. Certainly, it is one that need not impinge on the enjoyment of The Innocents as one of the most cerebral and subtle of ghost stories. Henry James’s dialogue is translated to the screen verbatim at times and with an uncommonly poetic sensitivity – few films lie in such subtly shaded plays of dialogue.

Moreover, the ambiguities ring true and are dealt with a delicate finesse. We see manifestations and they are haunting and eerie – like the other voice that joins Pamela Franklin’s singing; the scene where Deborah Kerr tries to make Franklin look at the shadowy figure across the lake; or the appearance of Quint’s ghost reflected in the window as Deborah Kerr plays hide’n’seek. Maybe some of these apparitions are a little more actual and less ambiguous than they would have been on the written page but they are as much as one wants to make of them – a window slams open, snuffing a candle out. “I’m so afraid,” Deborah Kerr fearfully admits. “It’s only the wind, my dear,” the aloofly smiling Martin Stephens calmly assures.

The Innocents is one of the few films where the ghost story takes place mostly in daylight. The lush photography of the estate almost aches to be rendered in colour but cinematographer Freddie Francis, who would later embark on his own career as a horror director, won an Academy Award for it anyway. Clayton and Francis have a technique of lingering on the images in a way that becomes obscene – how Martin Stephens’s goodnight kiss to Deborah Kerr stays longer than something that would be innocent, or how the images of a spider crawling across the face of a statue, of bugs eating butterflies, or a dead pigeon can suggest all manner of corruptions and obscenities lurking inside the disquieting stillness of the estate. The children’s faces come subtly underlit in closeup in a way that makes them seem decidedly sinister. As the retitling of the story suggests, this is very much a film about (non)-innocents.

The part of Miss Giddens has never been more perfectly cast than with the pale, willowy Deborah Kerr who gives a performance of intense, neurotic seriousness. She gets inside the prim, morally repressed nature of Miss Giddens in a way that none of the actresses in the subsequent film versions of the story manage to do. Both the children give bold, yet unsettlingly mannered performances. Martin Stephens, previously known as the lead child in Village of the Damned (1960), and Pamela Franklin, who would later play memorably in The Prime of Miss Jean Brodie (1969) and another subtly effective ghost story The Legend of Hell House (1973), both give excellent performances with their superciliously mannered charms.