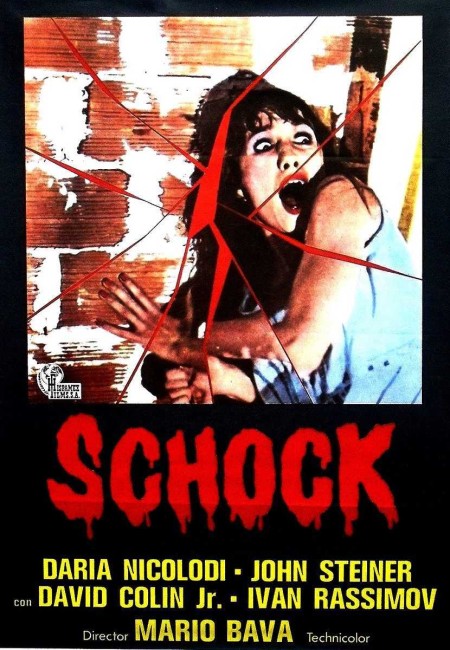 aka Beyond the Door II; Shock
(Schock-Transfer-Suspense-Hypnos)

Dora has just remarried the airline pilot Bruno. Her first husband Carlo died in an apparent drowning suicide several years earlier. This caused Dora to be placed in a psychiatric institution. Dora’s seven-year-old son Marco does not like Bruno. Marco may have the ability to cause things to happen. He accuses Dora of having murdered Carlo. At the same time, Dora experiences a number of terrifying supernatural occurrences and cannot be sure if she is being haunted or is going mad again.

Schock was the penultimate film of the great Italian horror director Mario Bava (1914-80). Bava had begun in the 1960s and made classics of the continental Gothic such as Black Sunday (1960) and Black Sabbath (1963), followed by formative entries in the giallo genre such as Blood and Black Lace (1964), Blood Brides/Hatchet for a Honeymoon (1969) and Twitch of the Death Nerve/Bloodbath (1971), along with other classics like the comic-book adaptation Danger: Diabolik (1967). (A complete list of Mario Bava’s genre credits is at the bottom of the page). Bava would only go onto direct one other film subsequently, The Venus of Ille (1979) for tv.

Schock then was Bava’s last theatrical film and he died three years later in 1980. His health faltering, he placed the direction of a number of crucial scenes of the film into the hands of his son Lamberto, the film’s credited assistant director, reportedly so that Lamberto could gain some directorial experience. Subsequent to his father’s death, Lamberto became a director in his own right with Macabre/Frozen Terror (1980) and most famously Demons (1985), among a handful of other horror films.

In the US, Schock was retitled Beyond the Door II by distributor Film Ventures International to capitalise on the success of the Italian-made Beyond the Door (1976), which had been a sizeable success in US release. Beyond the Door was a cheap and exploitative ripoff of The Exorcist (1973). The only point of connection between it and Schock is the presence of David Colin Jr who played one of the possessed mother’s children in Beyond the Door and plays an entirely different role as a possibly possessed boy here.

Where Beyond the Door was an out-and-out Exorcist copy, Schock, while it draws on the fad for occult/evil children we had in The Exorcist and The Omen (1976), is a more subtle film that comes closer to Roman Polanski’s Repulsion (1965) than it ever does Exorcist shock theatrics. While it is not Mario Bava’s best film, what I liked about it Schock is that Bava vies between a variety of explanations – between whether it is a ghost story about the dead husband whose body is revealed to be in the cellar haunting the household; whether David Colin Jr has become possessed (possibly by the late husband) and is exhibiting supernatural powers; or whether Daria Nicolodi is going mad again and experiencing hallucinations.

Bava swings between all of these explanations and at the end still leaves us uncertain as to which is the case. Sometimes even within a scene, Bava will toss in a supernatural happening and then turn around and reveal it as all being in Daria Nicolodi’s mind – at one point, she is pursued by a ghostly hand raising a knife but in the next shot this is revealed as her own hand holding the knife against her throat. At the very end of the film, Bava hauntingly leaves us watching David Colin Jr having tea on the lawn and another chair at the table moving of its own accord and a swing invisibly swinging.

Bava has a lot of fun with the hallucinations. Daria Nicolodi thinks she sees a hand reaching up out of the grass on the lawn to claw her ankle but this turns out to only be a rake. We see a phantom hand forcing itself through a door with a pair of box-cutters and then a floating box-cutter slicing open Daria Nicolodi’s nightgown. In one uncanny scene, we see David Colin Jr placing a photo of his mother’s new pilot boyfriend (John Steiner) on his swing and pushing it back and forward and this causing Steiner’s plane to suddenly go out of control.

One of the spookiest scenes in the film is where Daria Nicolodi is asleep in bed and a mysterious light appears and takes her clothes off, followed by the blurred face of her husband appearing above her. The spookiest part is when her hair starts moving across her face of its own accord and becomes splayed out, while she develops a sudden seductive expression.

While Mario Bava did superbly when it came to Gothic horror, he always seemed less effective when it came to the modern-day – his florid camerawork and lighting schemes did not sit so well in contemporary surroundings. The best of Bava’s modern-day films was Hatchet for a Honeymoon where he created something amazingly florid by setting the film in the surrounds of high fashion. Schock is probably not Mario Bava’s best film, as some people have claimed, but is undeniably interesting as always.

Mario Bava’s other genre films are:- uncredited co-direction of Riccardo Freda’s I Vampiri (1957) and Caltiki the Immortal Monster (1959); the Gothic classic Black Sunday/The Mask of the Demon/The Revenge of the Vampire Woman (1960); the Greek muscleman fantasy Hercules in the Center of the Earth/Hercules vs the Vampires (1961); the giallo The Evil Eye (1962); the Gothic horror anthology Black Sabbath (1963); the Gothic horror Night is the Phantom/The Whip and the Body/What? (1963); the giallo Blood and Black Lace (1964) the Gothic Kill Baby … Kill/Curse of the Dead/Curse of the Living Dead/Operation Fear (1965); the sf/horror film Planet of the Vampires (1965); the spy comedy Dr Goldfoot and the Girls Bombs (1966), Bava’s worst film; the masked super-thief film Danger Diabolik (1967); the giallo Five Dolls for an August Moon (1970); the giallo Hatchet for a Honeymoon/Blood Brides (1971); the giallo Twitch of the Death Nerve/Bloodbath/A Bay of Blood/Carnage/Ecology for a Crime (1971); the Gothic Baron Blood (1972); and the giallo/haunted house film Lisa and the Devil/House of Exorcism (1972).