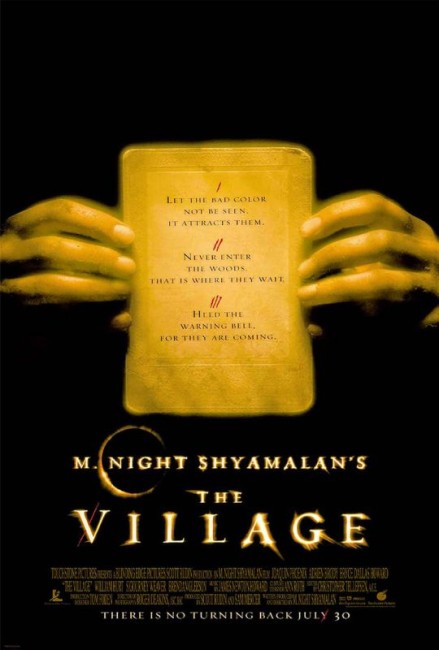 It is the year 1897. A small village lives in total seclusion from the rest of the world. The villagers live in fear of mysterious creatures that live in the woods that surround the town. The creatures are rarely seen but are known to kill those that venture into the woods. The colour scarlet draws the creatures and must be hidden lest it attract them. Suddenly the tenuous understanding that existed between the villagers and the creatures starts to be broken – first small animals are found slaughtered and then red markings painted on the doors of the houses. At the same time, Ivy Walker, the blind daughter of the village’s head elder, and the brooding Lucius Hunt finally admit their longstanding attraction for one another. However, this angers Ivy’s friend, the simpleton Noah Percy, who also loves her, and he stabs Lucius. In order to save the life of the man she loves, Ivy must venture through the woods to the outside world to obtain vital medicines.

M. Night Shyamalan first came to fame with his third film as a director, the runaway success that was The Sixth Sense (1999). The Sixth Sense sealed M. Night Shyamalan’s name as a major talent and he has since gone onto a host of other genre films, including Unbreakable (2000), Signs (2002), Lady in the Water (2006), The Happening (2008), The Last Airbender (2010), After Earth (2013), The Visit (2015), Split (2017), Glass (2019) and Old (2021), as well as producing The Night Chronicles 1: Devil (2010) and the tv series Wayward Pines (2015-8). The Village was M. Night Shyamalan’s sixth film. Many of Shyamalan’s films from The Sixth Sense onwards have been what one could call conceptual reversal sf/horror films, ones where Shyamalan creates a vast unfolding turnabout of expectations or a sudden understanding about the true nature of the world.

However, all of M. Night Shyamalan’s films since The Sixth Sense have disappointed – the big surprises that Shyamalan has on offer have turned out to be flat in one way or another. The good news is that The Village is easily M. Night Shyamalan’s best film since The Sixth Sense. For nearly three-quarters of the film, I was fully prepared to give The Village at the least a four star rating. (The other quarter I discuss below in the Spoiler Alerts sections). Shyamalan does a superb job of scene setting. He has a beautifully attuned ear for the nuance of period dialogue. His films make a virtue of simplicity and the sets and costumes here, even the lighting schemes, come with a puritan minimalism – indeed, Shyamalan’s choice of red as the forbidden colour may have been more to do with bleeding all bright colours out of the cinematographic scheme than a rule that comes with any logical reason.

Shyamalan demonstrates a superb grasp of character in these scenes. The cast all do excellent jobs – even the characteristically dull William Hurt comes to life. The best performance comes from newcomer Bryce Dallas Howard, the 23-year-old daughter of Ron Howard. Shyamalan has created a wonderfully rich character – the contrast made between her exuberance and Joaquin Phoenix’s dour silence is exceptional – and her performance in the part is outstanding.

The Village is also M. Night Shyamalan’s best directed film since The Sixth Sense. He creates a breathless dread as to what might exist in the woods. The brief appearances that we initially get – something seen scuttling under the trapdoor of the watchtower, the unearthly vision of a creature in a red hooded cloak with spikes protruding all over heading towards someone’s door – make an audience jump in their seat. There is a dazzlingly directed scene where Bryce Dallas Howard stands on a doorstep looking out into the mist as a creature that she does not see approaches in the background, only for Joaquin Phoenix to come running towards her in slow-motion to snatch her hand and take her toward the cellar. The stabbing of Joaquin Phoenix by Adrien Brody is also a stunningly directed piece – one where Shyamalan’s camera stays focused on closeups of either’s face as Brody comes towards Joaquin, then abruptly cuts to a surprise shot looking down from above on Joaquin’s stomach as Brody pulls the knife out, all in complete silence.

If this had been all of the film, The Village would have been a minor masterpiece. Unfortunately – and a big unfortunately – Shyamalan does the M. Night Shyamalan Thing and performs what is now expected of him and pulls off a big surprise reversal of expectations. Alas, while Shyamalan pulled this off with stunning effect in The Sixth Sense, giving audiences a surprise that became the buzz of that summer, his attempts to do so since have all been damp squibs. His films engage audiences in a conceptual mystery – one that starts well before the film even opens, beginning with the promotional campaign. Unbreakable had a gripping trailer with Bruce Willis being told that he was about to be informed of the true purpose of his entire life – only when Shyamalan unveiled his big surprise it was the risible notion that Bruce was a comic-book superhero; Signs started out with no more than a poster of a crop circle but when its surprise was unveiled, all that Shyamalan had on hand was a cheesy alien invasion movie with a handful of religious pretensions.

The Village has exactly the same problem – a grand promise and flat delivery. M. Night Shyamalan does a superb job in creating an intently absorbing mythology and a mystery concerning the unseen creatures in the woods. He does such a good job of this, both in the filmmaking, as well as the trailer and lobby publicity, that one’s mind is racing throughout trying to work out what could be lurking in the woods. However, when he does reveals his hand [SPOILER ALERT], all that Shyamalan shows is that there aren’t any monsters at all, that it was all made-up and that what we thought we thought was a film about creatures in the wood is not much more than a film about the Amish. Indeed, Shyamalan seems to have borrowed his conceptual reversal ending from the low-budget Roger Corman cheapie Teenage Caveman (1958). It is a complete fizzer of an ending.

[SPOILERS CONTINUE]. In his final revelation of what is going on, Shyamalan creates the vision of a people who have turned their back on modern society filled with spiralling crime figures and senseless murders for a much simpler time. I was prepared to extend Shyamalan this much, even if you feel that he is caricaturing the modern world as having no good and of a century earlier as being Utopian in its simpler, more virtuous life. However, the more you think about the set-up that such an improbable scenario requires, the more contrived it feels. For all Shyamalan’s speaking of a time when things were more virtuous, it seems to have escaped his notice that the community he has created is one that by its very nature requires that a lie of whoppingly big proportions be told to its youth. Moreover, while you might argue that the modern world is a place that has some dreadful things in it, surely the creation of a community where the populace live in perpetual fear and have crafted their entire lives around things that could kill them at any moment would be a far less preferable place to live than one where bad things occasionally happen to some people.

The Village is also a script that once its surprise is revealed starts to seem awfully contrived – if there are no creatures, for example, why are the people who are faking the creatures making it appear that they are starting to menace the village all of a sudden? It makes for good drama in the lead-up but falls apart once the surprise is revealed. Unfortunately, M. Night Shyamalan is increasingly starting to seem like a director whose grand conceptual promise seems more and more like a case of the Emperor’s New Clothes.