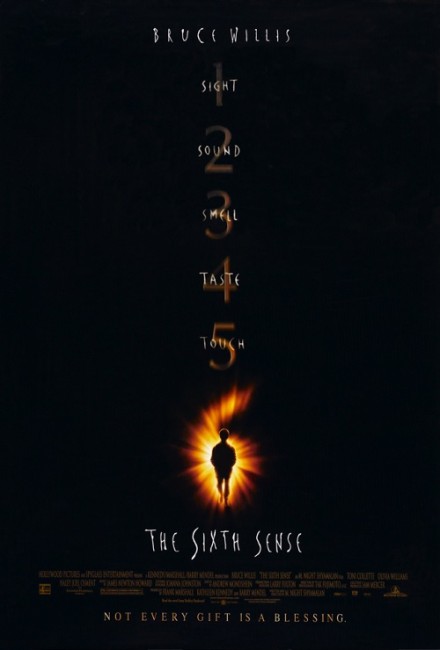 Vincent Grey breaks into his house of child psychologist Malcolm Crowe, claiming that Crowe misdiagnosed him as a patient several years ago, and shoots Crowe before committing suicide. Recovering, Crowe is assigned to Cole Sear, a young child who suffers from many the same symptoms as Grey. As he starts to communicate with Cole, Crowe learns that Cole is not suffering from child abuse and mental illness at all, but rather that he is able to see and communicate with the dead.

The summer of 1999 offered a number of surprises. One of these was a clear audience preference for old-fashioned psychological thrills over the wonderment of CGI bang and flash when it came to horror. The remake of The Haunting (1999) came first, replacing the original’s unseen, suggested horrors with an arsenal of ridiculous in-your-face CGI pop-up effects. In fact, audiences proved more sophisticated than The Haunting‘s makers assumed they were and The Haunting proved to be a flop and one week later was quickly outstripped at the box-office by the infinitely more sophisticated The Blair Witch Project (1999) and then one week following that by The Sixth Sense. Both Blair Witch and The Sixth Sense clearly opt for subtly suggested shocks and audiences responded to them in a major way. It was a triumph for once of audience sophistication over mindless technology and budget-driven bombast.

What one notices about The Sixth Sense is how remarkably quiet a film it is. You notice it sitting in a thousand seater multiplex. It is a tight, small film – one that almost seems out of place in a multiplex and more appropriate to a small arthouse theatre screen. Instead of leaping out at you, it remains hushed and introverted. Dialogue takes place in whispers and lowered voices. The apartments it is mostly set in are the realistic and unremarkable dwellings of middle and low income earners, not the production designers dream of extravagant dwellings that none of the characters could believably expect to afford.

However, once The Sixth Sense‘s quietude enfolds you, director M. Night Shyamalan produces some real jolts. The first one with Haley Joel Osment getting up in the night to pee and the loud thump on the soundtrack as someone passes in front of the camera makes the entire audience jump right out of their seats. Shyamalan keeps the audience on a seat edge throughout with a number of other genuinely spooky shocks – the appearances of the vomiting girl inside the tent; the boy who says “Come and let me show you where my father puts his gun” before turning and revealing the back of his head blown off.

The Sixth Sense is made all the more effective by the fragile, frightened performance of Haley Joel Osment (he was nominated for an Academy Award in the part). This is a performance that lacks any of the sentimental cuteness that children are usually portrayed with in almost every Hollywood film; rather is one that shows the real terrors of childhood. It is really Osment who manages to carry the film, as opposed to the top-lined Bruce Willis (who is also extremely good). The film is made considerably by M. Night Shyamalan’s writing, which comes with enormous subtlety and strength. The scene where Osment reduces his mother to tears by telling her how her grandmother did see her dance is heart-wrenching.

What makes The Sixth Sense though is the genuine surprise ending. It is one that takes the entire audience completely by surprise. [SPOILER ALERT]. It’s a variant on the twist ending in films like An Occurrence at Owl Creek Bridge (1961), Carnival of Souls (1962), Seizure (1974), The Survivor (1981), Sole Survivor (1983), Siesta (1987), Jacob’s Ladder (1990), Final Approach (1991) and A Pure Formality (1994), something that one has termed the Deathdream fantasy. (Although one is certain that M. Night Shyamalan obtained a good deal of inspiration from the diabolical twin film The Other [1972]).

Of all these, Shyamalan manages to make the most audacious use of such a surprise yet. Shyamalan’s wilful misdirection in making one think that Bruce Willis is experiencing a communication gap with his wife and that she has been seeing someone else is masterfully conducted. It is only when one sits down and thinks about it that one realizes just how much of the film has been subtly worked – like how Bruce Willis seems to but never actually does interact with anyone on screen except Haley Joel Osment – to present a misleading ambiguity. It is one of the all-time great surprise twists in a film.

The Sixth Sense was an enormous sleeper hit and one of the most successful of its year. It launched M. Night Shyamalan as a major new talent. Next up for Shyamalan was the script for likeable children’s film Stuart Little (1999) about a mouse boy. His next directorial outings were the strange superhero film Unbreakable (2000), the crop circles/alien invasion film Signs (2002), the period monster film The Village (2004), Lady in the Water (2006) about a water nymph and predestination, The Happening (2008) about a mysterious catastrophe, the fantasy adventure The Last Airbender (2010), the planetary adventure After Earth (2013), the Found Footage horror comedy The Visit (2015) and the split personality film Split (2017) and its sequel Glass (2019) and Old (2021) about a beach where people rapidly age. Many of these tried to replicate the things The Sixth Sense did and produce similar conceptual twists but with mixed results. Shyamalan also formed the production company The Night Chronicles to produce and form ideas for films for other directors with the company’s first (and only) project being the modestly effective horror film The Night Chronicles 1: Devil (2010) about five people trapped in an elevator with The Devil. He also produced the supernatural tv series Wayward Pines (2015-8).