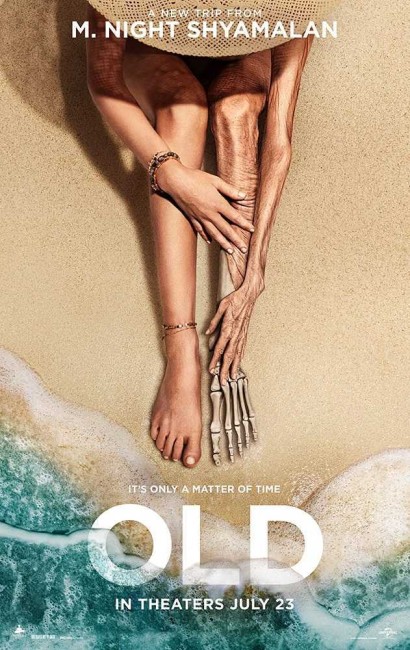 Husband and wife Guy and Prisca Cappa and their two children Maddox and Trent, respectively aged six and five, take a holiday to the Anamika tropical resort. The resort’s manager offers them the use of a private beach. They are taken there along with two other parties, the surgeon Charles, his wife Chrystal, their young daughter Kara and her elderly mother Agnes, and another couple, the nurse Jarin and psychologist Patricia, as well as find the rapper Mid-Sized Sedan already there. Their relaxation is abruptly interrupted as a body turns up in the surf – that of Mid-Sized Sedan’s girlfriend. When they try to leave the beach to get help all of them are repelled back. Agnes expires and then the others are shocked to find that the children who were previously 5-6 now seem to have entered puberty. They realise that the beach is causing them to age approximately one year every 30 minutes. As they try to find a way off the beach, the underlying medical conditions that several of them have are exacerbated by the rapid aging.

M. Night Shyamalan is one of those like, tolerate him or hate him directors. Shyamalan gained a huge boost with the sleeper hit of his third film The Sixth Sense (1999), which came with one of the all-time great twist endings. People were excited about Shyamalan’s promise through his next films Unbreakable (2000) and Signs (2002), although the big Shyamalan conceptual mystery and twist ending was starting to be considered a damp squib by the time of The Village (2004) and Lady in the Water (2006). Shyamalan’s next few films, The Happening (2008), The Last Airbender (2010) and After Earth (2013), suffered some terrible reviews. Shyamalan seemed to find redemption by teaming up with Blumhouse and working on their medium-sized budgets to make The Visit (2015) and Split (2017), which gained him the best notices in a decade, although that goodwill seemed to founder by the time of the Split sequel Glass (2019). Shyamalan also makes acting appearances in most of his films – he can be seen here as the driver of the tour bus that delivers the group to the beach.

Shyamalan usually writes original material but in this cases adapts a graphic novel Sandcastle (2011) by Swiss comic-book artist Frederik Peeters and documentary-maker Pierre Oscar Levy. Shyamalan states that he was greatly affected after reading the graphic novel. That said, the original has been changed somewhat on its journey to the screen. The characters are more or less there – the original has the addition of a middle-aged science-fiction writer while the character of the rapper Mid-Sized Sedan was meant to be an Algerian refugee – and the essential dramatic events are the same. The major difference is in the ending that Shyamalan adds onto the graphic novel that offers an explanation for why they are on the beach (which I detail in the spoiler section below), whereas Sandcastle offers no explanation, merely posits the one Shyamalan offers as a potential explanation.

M. Night Shyamalan gets more of a bad rap than he is due and I am willing to defend him on most counts. If nothing else, he is one of the few directors out there making original content and not delivering endless sequels. He takes chances, sometimes bites off more than he can chew but consistently delivers original and interesting ideas. Old received some mixed reviews but I am prepared to argue that it is one of Shyamalan’s best films.

The concept of rapid aging is never one that has been explored much on screen except perhaps as a quick gag in a film like The Ice Pirates (1984) or the curses inflicted on Lori Petty in Warlock (1989) and the heroine of Howl’s Moving Castle (2004), as well as the scenes with David Bowie in The Hunger (1983). The only full example that comes to mind is the Star Trek episode The Deadly Years (1967) where the Enterprise crew rapidly age due to conditions encountered on a planet. So in fact what we have is screen concept that has never been dealt with before in any substantial way.

The film develops a creepy fascination. Shyamalan introduces the palatial resort but things seem slightly off – his camera chooses odd angles, sometimes with people out of the edge of frame. After some business with a dead body discovered and the elderly woman passing away, things on the beach get weird. The parents find there is something wrong with the children, while Ken Leung and Nikki Amuka-Bird react strangely when the children give their age – scenes during which we never see what has happened to the children – all before Shyamalan reveals his hand and we see they are now in their teens.

The most ick scene is where we see two of the teenagers lying down together and next she emerges with a pregnant belly. Wisely, Shyamalan doesn’t dwell too much on what happened – the whole issue comes with some undeniable questions like does two 5-6 years old in teenage bodies still constitute underage sex? Or how do two children figure out the mechanics of what to do? Nevertheless the scene has a real get under the skin ick factor that works fantastically well.

There is a similar kind of feeling to the subsequent scene where they try to remove the tumour from Vicky Krieps at the same time as finding that all wounds heal back within seconds. (Although I do have major doubts about the viability of conducting surgery with a penknife and people holding a wound open with bare hands where nobody seems to have done the most basic things like clean either the knife or their hands beforehand). Some of the later deaths – where one character ends up a twisted mass of bones and another’s blood is turned to rust – seem inserted more so that M. Night Shyamalan can make sure he is still subscribing to the horror label.

Throughout M. Night Shyamalan does what he does well, namely to create a fantastical situation and then explore the conceptual parameters of it. There is the sense of seeing ideas play out and Shyamalan coming up with rationalisations as to requirements of the premise – like why they can’t leave the beach or why hair and fingernail growth wouldn’t also accelerate. It’s a solid premise and Shyamalan does a great job exploring it. I would be happy to call Old his second-best film after The Sixth Sense maybe co-equal with or superior to The Visit.

The big issue that many people reacted to in criticising Old was its twist ending, although it is not so much a twist, unexpected ending as just an eventual explanation for the situation. It is not, for example, the same sort of Conceptual Reversal Twists that The Sixth Sense and The Village are based around where the carpet is pulled out from under our feet and what we thought we knew entirely turned on its head. Here [PLOT SPOILERS] we learn that the entire holiday resort has set up as an experimental laboratory to test out drug treatments in an accelerated timeframe. This however never explains why conditions are the way they are on the beach – you could imagine quite an interesting prequel about how people discovered and then decided to exploit the phenomenon,

The ending certainly stretches believability in a big way, although I would question whether it does to snapping point as it appears to have done for other people. My feeling is that the film would have worked far better as it did in the original graphic novel, which was akin to an episode of The Twilight Zone (1959-63) where the beach was simply a place where something strange happened and there was no need for explanations.

(Nominee for Best Adapted Screenplay at this site’s Best of 2021 Awards).